The All Rise Playlist

Among the many virtues of music, one that I particularly prize is its ability to lift you up when you're feeling down: there's nothing quite like going into a concert you almost couldn't be bothered to attend and coming out grinning, or coming home after a long day and spinning a disc that takes your troubles away. It is in experiences like this that my all rise playlist has its origins. That, and I stole the idea from one of my favourite TV shows. 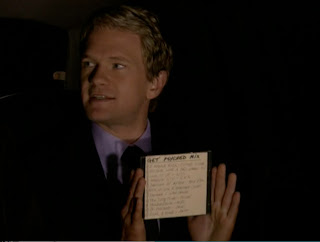 About seven years ago when the show was much closer to its prime, there was an episode of How I Met Your Mother called The Limo. In it the character Barney, played superbly by Neil Patrick Harris, explains the secret of why he is "so psyched so much of the time": he has a playlist, a "get psyched" mix, that instead of rising and falling is all rise. Now I should stress at this point that with his appalling treatment of women and general behaviour that is light years beyond questionable, he is hardly much of a role model. And yet this didn't seem like such a bad idea. Except that the actual track featured in the episode, Bon Jovi's You Give Love a Bad Name never struck me as terribly lifting with lyrics like "shot through the heart, and you're to blame, darling you give love a bad name". Obviously Barney has different ideas as to what lifts your spirits than I do. Ditto, frankly, the various full versions of the playlist that have appeared.

Continued »
Posted by Tam Pollard at 00:19 No comments:

In fairness to the Albert Hall and the BBC Proms, setting up a system that can adequately cope with a flood of thousands of people trying to book more than a hundred thousand tickets in one day is not easy. And though the system is not ideal it is also not the sort of disgrace we had up here with the Edinburgh festival Fringe a couple of years ago.

Before I get on to criticising I will note some things they get right. It is great that booking is on a weekend (as with the Edinburgh International Festival, at least for main public booking, and the Berlin Philharmonic). Contrast this with the Royal Opera House who use a weekday, which is problematic for people who work. Yes, some people work weekends, but fewer so a weekend is fairer and fairness is, in my mind, along with robustness, one of the most important requirements of one of these booking systems.

The key challenge is one of server demand. In an ideal world this would be solved by providing more server capacity, but resources are finite and even in these days of virtual servers I accept that may not be a practical solution. The Proms is not alone in this sort of problem: companies like the Royal Opera House and National Theatre have similar issues, though while I am not privy to the numbers, I suspect that in terms of number of tickets going on sale in a single day, they may have the biggest. As with the Royal Opera House, the Proms attempt to solve this with a queuing system. Again, this is broadly a decision I agree with. In theory it means first come first served and provides an effective way of managing the demand on the servers. In theory, that is.

The BBC have announced their 2013 Proms season and while it is not perfect it still serves as a reminder of why the BBC offers good value to those of us who are fans of classical music in providing this unique festival. This is true even though it's been some years since I made it to the Albert Hall (not least as in many regards it can be argued that the best seat to listen from is actually your own sofa, especially now that Radio 3 is at 320 AAC online). I do find it puzzling that if you want an easy way to scan through all the concerts this is to be found via Bachtrack's clearly laid out site, which is much more user-friendly than the BBC's own if you want to look at the whole season rather than a specific Prom.

For me one of the expected highlights is the arrival of Sakari Oramo as the BBC Symphony Orchestra's new chief conductor. As I said when first proposing him for the post after a stunning debut concert, one of his potential strengths is that he is adept in both British music and new music. We shall see, hopefully, both of those traits in the first night, when he gives us a world premiere by Julian Anderson, Britten's Sea Interludes and Vaughan Williams' A Sea Symphony. I am particularly looking forward to the latter which is a favourite of mine and which I expect Oramo will ensure is suitably dramatic.

It is perhaps a slight shame that we will only see him twice this season, but hopefully that will expand in future years. His other programme mixes the world premiere of Param Vir's intriguingly titled Cave of Luminous Mind with Sibelius's violin concerto, Bantock's Celtic Symphony and Elgar's Enigma Variations. Oramo's Elgar was one of the many highlights of his decade in Birmingham, as evidenced by his recording with the CBSO of both Enigma and Gerontius. Similarly his recent Stockholm account of the second symphony. These are interpretations that are both powerful and feel fresh.

There are a number of fine companies around the world that I wish were within an evening's easy travelling time of Edinburgh. Many of them, such as Deutsche Oper or the Chicago Symphony are quite some way away. Others are a little closer, though would still require an overnight stay and lack conveniently situated friends or relations to stay with. The City of Birmingham Symphony Orchestra falls into the latter category and their newly announced season has many tantalising items.

I was rather surprised to learn this will be Andris Nelsons' sixth season with the orchestra. How time flies. Since I will be unlikely to partake of much if any of the season, this will not be as detailed a roundup as the local bands get, just a few highlights I'm most jealous of.

First up, one of my favourite works, Mendelssohn's 2nd symphony, Hymn of Praise, gets a rare and well deserved outing under Edward Gardner as part of a complete cycle. This joyful choral work is notable for one of the finest trombone themes in music, indeed it opens with a trombone solo, and also has a claim to very little fame as the only piece of music I have arranged (very slightly) for public performance (or really at all).

Regular readers of this blog, or people who follow me on Twitter @heresfinn will know I have been strongly critical of the current artistic leadership of English National Opera. Recently, though, my frustration has intensified in the light of what has seemed to me to be a wilful determination on the part of many professional critics and arts journalists simply not to ask obvious questions about, or to ignore obvious explanations for, the state of affairs at the company (not least concerning possible reasons for its over £2 million losses in 2011-12 – which the company was bullish on today interpreted variously here and here and see further note at end of post). I have also been annoyed by the praise which has been directed at the company for being allegedly experimental and for its embrace of technology. There appears to be an idea, so far as I can judge, that opera is in deep trouble as an art form and that English National Opera's allegedly adventurous programming (such as the recent unimpressive Sunken Garden) is the path to a better future. I do not propose to go into a detailed analysis here of why I don't think the company should be regarded as especially adventurous, or presenting the future of opera. What I will suggest is that while we might debate some of this with regards to previous offerings under John Berry's leadership such adjectives certainly cannot be applied to a 2013-14 programme dominated by All the Old Familiar Faces and Approaches.

Let us start with the positives. The most exciting work on the agenda is unquestionably the world premiere production of Julian Anderson's The Thebans. I don't know Anderson's work at all, but I'm a big fan of anything related to Greek mythology. It's also great to see Roland Wood return following his superb performance in Vaughan Williams's Pilgrim's Progress last year. I'm also intrigued to see Pierre Audi in action whose work I don't think I have previously managed to catch. All that said, my brother heard an orchestral work of Anderson's at a concert last year and was not grabbed. [Editor's note. The piece was The Discovery of Heaven which I found dull and which did not to me evoke any of the things it was intended to, according to the programme. That said, I'm all for new opera and will certainly give this a try if I'm in the area at the right time.]

Also promising is the return of Terry Gilliam to direct Berlioz's Benvenuto Cellini. Corinne Winters (the outstanding element of this season's La Traviata) returns, as does Nicky Spence. In general casting seems to be on more solid foundations across the season than has sometimes been the case in recent years which is certainly cause for a cheer or two.