After the extraordinary experience of the Glyndebourne Tristan my hopes were high for this, so much so that I wrote on the booking form that I would accept two tickets anywhere in the theatre at any price (which is probably why my esteemed brother and I ended up at the front of the Stalls in two separate rows). The first two acts didn't quite live up to expectations, the third was a profound and overwhelming experience.

The central wonder of this production, and worth a top price ticket alone, is the extraordinary Hans Sachs of Gerald Finley. I previously saw this opera at Covent Garden in the excellent Graham Vick production (to be revived this Christmas) and starring John Tomlinson in his prime, and I wondered in advance how Finley would compare. Fortunately Finley is so vocally impressive, and gives such a commanding performance of such a completely different interpretation of Sachs to Tomlinson's that one is not troubled by ghosts. Finley possesses those key attributes – the ability to be still and in character on stage, and to convey great emotion with the smallest gestures. For much of the Masters meeting in Act One Sachs has only minimal interjections, but Finley drew the eye. In Act Three, the ode when all the Masters have assembled is sung affectionately (and cleverly tongue in cheek) to Sachs who stands for much of it with his back to the audience, yet the emotions continue to resonate though his face is hidden. Above all, Finley's Sachs is young enough that the possibility of his marriage to Eva, which Tomlinson clearly did not take seriously for all his affection for her, is a matter of absolutely deadly earnest. When Sachs bursts out with it as he tries to repair her shoe it's heartbreaking to watch, and it haunts the opera right to the end, in glances between Sachs and Eva, and his suppressed pain in the middle of the general joy. Finley's performance is one of true operatic greatness and I count myself deeply fortunate to have witnessed it.

The production in which this performance is embedded is very traditional (though clearly not traditional enough for the people behind us on the bus back to Lewes who were complaining among other things that Act Three is supposed to be set in a meadow). At times, particularly in the first two acts, it's a little bit staid – showing perhaps that you can't win with picky opera audiences either way. This was, I think, less a consequence of the straightforward design and more of movement which failed the naturalism test. Often during the first two acts (and particularly during the riot which for me was the one major failure in the staging) I was reminded of a performance by Philip Langridge as Jupiter in a long ago production of Semele. He made each move as if he was remembering that the director had told him to move to x now, not as a natural act in character. Thus with several characters during the first two acts (though not Finley) and with the chorus in the riot – the violence was especially unconvincing – though I have wondered subsequently if in this instance being so close to the stage was a handicap to suspension of disbelief. However, in the third act all these doubts were swept away – a point I shall return to. It should also be noted here that the chorus sing superbly throughout, again especially so in the third act.

Continued »
Posted by Finn Pollard at 17:50 No comments:

The Where's Runnicles Album of the Week: Electric Bath by The Don Ellis Orchestra

I've been thinking a lot this week about new music, about hearing things for the first time and about seeking out new things. It therefore seemed appropriate to do my first Album of the Week in a while and, more specifically, to pick out a disc first released over forty years ago and whose praises I've been meaning to sing for quite some while now. 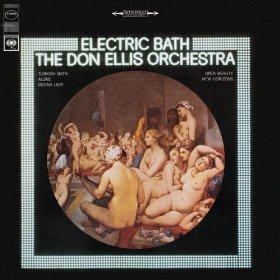 At first glance, if you're not familiar with Electric Bath this may seem a little odd, but actually it makes perfect sense. I first heard the album a decade or so again when my brother, having heard a song on the radio, gave it to me for my birthday. I had never heard anything quite like it. Today, four decades after it was made, it still sounds fresh and new, its five tracks still seem to overflow with invention. It is also toe-tappingly good.

Continued »
Posted by Tam Pollard at 17:21 No comments:

Kronos in Glasgow, Part II: The Infinite Variety and the Burning Fire of Discovery

At some point during Saturday night's Kronos Quartet concert three words struck me. They were the title of the first episode of David Attenborough's groundbreaking natural history documentary Life on Earth: "The Infinite Variety". For, having been to the Americas, Egypt, Iceland, Palestine, Australia and Iraq the previous evening, here we were embarking on yet another world tour, and a completely different one at that.

Photo: Andy Catlin
It began in America with John Zorn's The Dead Man. The quartet seemed to have a lot of fun with this series of miniatures, not least in the energy with which they turned the pages. Kronos are, since we're on the subject of pages, more or less unique in my experience in having their music hole punched into ring binders (in one case on Friday with wedges cut out so they could fold it back on itself). They pushed their instruments to their limits. And, indeed, their bows as, in the final section, they were called upon to vigorously swat the air as if batting away imaginary wraiths, with one of them taking it in turns to provide minimal accompaniment beneath. The final unified stroke, wherein three bows came together in the manner of the swords of the three musketeers, had the same impressive synchronisation as any of their playing.

Continued »
Posted by Tam Pollard at 08:19 No comments:

Kronos in Glasgow, Part I: Favourite Egyptian Tangos (and much more)

I only really discovered the Kronos Quartet last summer. That was in a stunning concert as part of the Edinburgh International Festival. At the time, someone much better acquainted with their work remarked to me that, featuring is at did Steve Reich's Different Trains and George Crumb's Black Angels, it represented something of a greatest hits. Doubtless mainly a result of having several days worth of gigs to play with, but Kronos in Glasgow, a three day celebration of the Quartet and those they've worked with, with talks and the like spilling on a further two days, is an altogether more diverse representation. Such it was that they began Friday's opening concert with Oh Mother, the Handsome Man Tortures Me, by an unknown Iraqi composer, a whirling, dancelike frenzy of intensity.

Photo: Andy Catlin
String quartet and youth choir is perhaps not the most obvious musical combination, yet they showed it to be an effective one. Terry Riley's Another Secret eQuation began as the National Youth Choir of Scotland took to the stage with plaintif cries, causing you to wonder whether the piece had started or they were just warming up. Their fine performance was every bit a match for the Kronos's playing. The work comprised three continuous sections, marked by the repeated phrases that dominated them: "We are lost and cannot find our way.", "They never listen to us... No, never!" and "The universe makes it up as it rolls along.". And while it was well played and sung, it didn't quite add up to all that much. Or, to put it another way, it wasn't as profound as it perhaps thought it was. It was nice, though, to see the choir's director Christopher Bell actually getting to do something on stage. Normally after a concert with the Edinburgh Festival Chorus, which he also directs, we only see him on the stage at the end for a curtain call.

Continued »
Posted by Tam Pollard at 16:13 No comments:

Denève and the RSNO end their season with Beethoven and Adams

To open the final concert of their 2010/11 season, Denève and the RSNO had chosen John Adams' On the Transmigration of Souls, a piece written for the New York Philharmonic to mark the first anniversary of 9/11. I have the recording of those concerts and have long found it a powerful piece, so it's good to have the opportunity to hear it live.

What struck me most was the various things it reminded me of, from the opening ambient sounds of New York, not entirely unlike the start of Miles Davis's final album Doo-Bop, to the refrain of "missing" which calls to mind Thomas Dolby's One of our Submarines. However, perhaps the most interesting parallel can be drawn with another of the Ten out of 10 works that have featured so prominently this season, and in my view the most successful of them: Magnus Lindberg's Graffiti. Just as that drew on scraps of writing from around Pompeii, so too Adams sets similar fragments from 9/11, perhaps most poignantly in the repeated words of American Airlines flight attendent Madeline Sweeny "I see water and buildings..."

The minimalist settings and blending of electronic elements combine to give a familiar Adams sound world, and Denève controlled his various forces well. The RSNO chorus added a nicely etherial tone.
Perhaps the only stumble came with the offstage trumpet quoting Ives. It may have been a function of where I was seated, but positioned outside the centre door to the dress circle it was just far too prominent. Louder, indeed, that it would have been on the stage, rather defeating what surely is the point of offstage placement.