Kronos in Glasgow, Part I: Favourite Egyptian Tangos (and much more)

I only really discovered the Kronos Quartet last summer. That was in a stunning concert as part of the Edinburgh International Festival. At the time, someone much better acquainted with their work remarked to me that, featuring is at did Steve Reich's Different Trains and George Crumb's Black Angels, it represented something of a greatest hits. Doubtless mainly a result of having several days worth of gigs to play with, but Kronos in Glasgow, a three day celebration of the Quartet and those they've worked with, with talks and the like spilling on a further two days, is an altogether more diverse representation. Such it was that they began Friday's opening concert with Oh Mother, the Handsome Man Tortures Me, by an unknown Iraqi composer, a whirling, dancelike frenzy of intensity.

Photo: Andy Catlin
String quartet and youth choir is perhaps not the most obvious musical combination, yet they showed it to be an effective one. Terry Riley's Another Secret eQuation began as the National Youth Choir of Scotland took to the stage with plaintif cries, causing you to wonder whether the piece had started or they were just warming up. Their fine performance was every bit a match for the Kronos's playing. The work comprised three continuous sections, marked by the repeated phrases that dominated them: "We are lost and cannot find our way.", "They never listen to us... No, never!" and "The universe makes it up as it rolls along.". And while it was well played and sung, it didn't quite add up to all that much. Or, to put it another way, it wasn't as profound as it perhaps thought it was. It was nice, though, to see the choir's director Christopher Bell actually getting to do something on stage. Normally after a concert with the Edinburgh Festival Chorus, which he also directs, we only see him on the stage at the end for a curtain call.

It would be tricky to find a better example of Kronos's musical diversity than Michael Gordon, whose Exaulted followed (Gordon was born in Florida, then raised in an Eastern European community in Nicaragua). Here, again, Kronos were joined by NYCoS, who once again provided an impressive vocal display as Gordon called for a kind of whistling then falling sound, reminiscent of those howling fireworks that screech up and then die away (though a much more pleasant version).

From the Americas to Iceland and Sigur Rós or, as Kronos's leader David Harrington described them, "our favourite Icelandic group, I'm sure everyone has one". Flugufrelsarinn (The Fly Freer) was soft and evocative and, well, free flying. The electronic amplification here particularly well used, giving the quartet not so much a louder sound, though it did that too, but rather a bigger one.

In introducing Reich's WTC 9/11, Harrington told us this was different from Reich's other compositions for them, such as Different Trains. I'm not totally sure what he meant by that since he didn't elaborate further, perhaps he meant in terms of direct emotional resonance, since it reminded me a lot of the early piece in musical terms. The quotes from Reich in the programme seem to support this view. As he says: "For 25 years we lived four blocks from the World Trade Centre....... For us, 9/11 was not a media event.". The melding of live and recorded elements was superbly done. The alarm-like motif in the background lent the work's opening a driving intensity. Often the cello appeared to be cuing the spoken dialogue; whether this was actually some clever hyperbowing or just excellent timing, I'm not sure. Either way it was impressive. In contrast to John Adams' 9/11 piece, which we had the chance to hear recently, Reich has chosen much more narrative quotations. In addition, rather than rely on a live choir, these are either archival recordings, or recordings made by Reich from interviews in 2010. The overall result was both evocative and powerful, especially in the double meaning or WTC as World to Come towards the end, and the final words of "and there's the world right here."

How, then, do you follow something like that? Kronos had a perfect answer in Jon Rose's Music from 4 Fences. Perhaps better than to try to describe it, would be to reproduce Jay Blakesberg's photograph which has adorned much of the publicity material for Kronos in Glasgow: 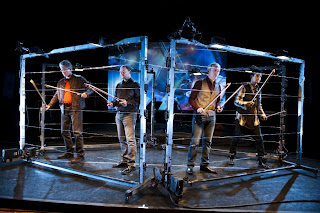 Photo: Jay Blakesberg
It began slowly with violinist John Sherba moving his fence into position and giving one of the wires a loud, resonate pluck. Gradually the work built, until all four were in a zig-zag line, and then finally enclosed in the cage. It was remarkable for the rising intensity of the music as it progressed, the range of sonic textures and also the sheer dramatic spectacle, not simply of the fences themselves, some of whose strings were in fact barbed wire, but also the fraying hairs on their bows and ever the snapping of one of the strings right at the end. It was simply jaw-dropping, a performance for which the term must see seems an understatement. This is a string quartet as you have never seen it before, though it did call to mind for me some of the musical contraptions concocted by Lelavision.

To be honest, my description is pretty inadequate. Fortunately, Kronos have a video on their website:


Kronos Quartet: Jon Rose / Music From 4 Fences from Kronos Quartet on Vimeo
They followed it up with two encores, the eerie atmospheric sounds of their favourite Palestinian group, Ramallah Underground, with Tashweesh (Interference) and finally their favorite Egyptian tango, Midhat Assem's Ya Habibi Ta'ala (My Love, Come Quickly). Harrington remarked he was sure we all already had a favourite Egyptian tango. Well, I for one did not. I do now. And so much more.

Technically speaking, the gig did not seem quite so perfectly assured as Edinburgh. This was probably because I was seated very near the front and to one side, thus very close to one of the speakers, so things were slightly unbalanced. Also, it was a pity that the hum of the hall's air conditioning was so loud over the quiet endings of some of the pieces.

Still, such quibbles are very minor indeed amid such a captivating programme. Unlike the Edinburgh programme, they haven't yet recorded all these works. Hopefully, 4 Fences and WTC 9/11 will be soon, in the meantime, here's a Spotify playlist of those that are available.
Posted by Tam Pollard at 16:13