Mackerras conducts Mozart (but not the recordings you are probably expecting) 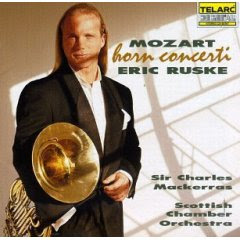 I bought this disc a little by accident. A week or two ago I acquired Mackerras's new recording of Mozart's final four symphonies with the SCO (which, though not the subject of this post, is absolutely superb). However, I've been a little annoyed by the fact that almost no review bothered to make serious comparison with his earlier Prague Chamber Orchestra recordings (which formed a complete cycle, also highly recommendable). Then, the weekend before last, on Radio 3's CD Review, Andrew McGregor informed us that Mackerras was recording some of these works for the 3rd time, earlier recordings I was unaware of (and which, when they arrive, may form part of a post along with the new ones and the Prague ones). However, while searching Amazon for all things Mozart and Mackerras, I came across these horn concerti, of which I was already dimly aware, and took the punt.

I knew nothing of Ruske and so, perhaps unusually for a concerto recording, I was buying on the strength of conductor and orchestra (who have shown their Mozart pedigree time and again in their series of opera recordings and their piano concerti with Brendel). I am glad I did. On the basis of Wednesday evening's first listen, this is one of the finest recordings I've heard and seems likely to be one that gets played a great deal in the future.

As one would expect, the SCO are on fine form under Mackerras, exemplary, one might say. One of his many talents is that he is a very sensitive accompanist and, while the orchestral playing is beautiful and sparkles throughout, Mackerras never dominates his soloist. Speeds are brisk, but never feel rushed.

But what of Ruske? An American who rose to be principal horn of the excellent Cleveland Orchestra at the age of twenty and of whom I'd never before heard. I'm moved to question why not. His phrasing is superb and he gets a lovely tone.

The recordings I own for comparison are the Orpheus Chamber Orchestra (where solo duties are divided between orchestra members William Purvis and David Jolley), Alan Civil with Klemperer and the Philharmonia, and Ab Koster with Burno Weil and Tafelmusik (the later being a period instrument/natural horn effort). This last recording, despite being the first I owned, is actually the one I play least: I prefer these works on modern instruments, and Weil not nearly as good an accompanist as either Klemperer or the Orpheus.

The Orpheus (an interesting group, in that they play without a conductor) are much finer - taut playing, but with somewhat clipped phrasing and tones and colours not as impressive as those Mackerras coaxes from the SCO and they do not match his skill as an accompanist. Similarly the soloists, though creditable, are not on a par with Ruske: more notes come closer to being fluffed.

So, to Civil. He was one of the finest horn players of his generation (or, indeed, any) alongside Barry Tuckwell. (For your trivia question, what was probably the only occasion they performed together in the same orchestra? The answer links to another name in this post.) His phrasing and the quality of his playing is simply superb. Klemperer is a fine accompanist and the Philharmonia feel surprisingly spry under him. There is none of the weight and stodginess one might have expected from his studio Beethoven recordings of the same period. Between Ruske and Civil, the latter is probably the finer player, but I think Mackerras and the SCO provide a more engaging support. I also think I prefer their faster, more historically informed approach to the works (but this is very much a matter of personal taste).

Ruske and Mackerras have one final advantage and a curiosity. As with many recordings they include the Rondo K371, but there is also the fragment K494a (which, like most such fragments, ends disappointingly mid-flow). The gem is a full orchestration of Flanders and Swann's magnificent Ill Wind (set to the rondo finale of K495 "I once had a whim which I had to obey...." and so on). Mackerras, with his G&S pedigree plays this just right and Richard Stuart sings well, if not having quite the characterisation of Michael Flanders. A must for Flanders and Swann fans too, then.

Alongside Civil, this is one to return to again and again (my preference is just for the slightly more vital reading of Ruske and Mackerras, but I wouldn't want to be without either, it is also worth noting that the quality of the Telarc recording is probably better than EMI's effort for Civil, which is slightly harsh).

P.S. The answer to your trivia question is that Civil and Tuckwell appear together on Mackerras's recording of the original wind version of Handel's Firework music. Recorded in April 1959 with what was probably one of the odder scratch orchestras in recording history. Finding 26 oboes, 14 bassoons, 4 contra-bassoons, 2 serpents, 9 horns, 9 trumpets, 3 pairs of timpani and 6 side drums cannot be easy at the best of times. So it was that at 11 p.m. on April 13th, almost all of the top professional wind players mustered, some still in evening dress from their performances that night, at St Gabriel's Church for a recording that ran until 2.30 a.m. the next morning. Also of note, the only woman in that orchestra was Evelyn Rothwell (or Lady Barbirolli as she was better known). This historic document, and wonderful recording to boot, is available on Testament.