Miss Mussel, she of Operaplot fame, recently did it again. Okay, she didn't quite do anything that received quite the same success, but she did waste a lot of my time on Friday. Well, I say waste, but time spent listening to Beethoven is never wasted. What I should say is she ensured that time I should have spent doing other things was instead spent having a great time listening to Beethoven and thinking about Beethoven numbers.

So, what is your Beethoven number? Well, it's the numbers of the symphonies in order of your preference for them, most liked first. Of course, immediately we run into problems - as regular readers will know, I know I don't like picking greatest thises or thats, so I couldn't simply have a number. In the end I came up with 784,5213,9,6. Doubtless it will be different tomorrow.

I used the commas to group ones I can't really choose between. The first thing that might jump out at you is that the six is awfully low. This maybe a genetic thing - nobody in my family really loves it. That's not to say I haven't heard great performances. Mackerras at the Festival here back in 2006 springs most readily to mind, so too Erich Kleiber and the Concertgebouw. But in general I find it, and especially the opening movements, sounds rather too much like wallpaper music in many hands.

Nine is low too, though I often love it: Bernstein's famous Ode to Freedom reading, Furtwangler at Bayreuth, Mackerras and, of course, the great Runnicles reading, seething with tension: But, for whatever reason, if push came to shove, others would probably come higher. Interestingly, two of my first three are two of the symphonies I came to earliest in life. The story behind the fourth is particularly interesting. I learnt it from my parents' vinyl of Karajan's early Berlin readings. Somehow, I managed to misread the liner notes (I think it's possible the LPs were in the wrong order in the box and I thought I was playing the sixth). However, for whatever reason, I spent many years believing that the opening movement symbolised a thunderstorm. I now know that isn't the case, but I can't shake the image. The turbulence and drama of it is wonderful.

Then there's the seventh, which seemed to top many lists. I first met it properly (I'd heard it on CD many times before) in 2003 at Aldeburgh. Daniel Harding was giving his penultimate concert with the Bremen Kammerphilharmonie as music director. The first half (Rameau and Sibelius's violin concerto) didn't entirely sweep me away. I spent the second half on the edge of my seat, and the next couple of years looking for a performance that had the same excitement (heaven knows how, but the octogenarian Charles Mackerras managed to exceed it).

The eighth is a little different. It comes bafflingly very low down many lists. Indeed, in general the even numbers tend to get shorter shrift. On a music forum some years ago, a poster moaned that the seventh was paired with the eighth on a particular CD and it wasn't in the same league. No, quipped a friend of mine, it certainly wasn't, it was much better (not that I agree with that, mind). What I love most about this work is how different it can feel in different hands. Colin Davis, in Dresden, gives the short piece an epic weight that, in some ways, feels almost Mahlerian in terms of distance travelled. In Mackerras's hands the piece feels almost dangerous.

But what about the fifth, the third, the second; they're all great and I love them all. So the only thing to do was spend much of Friday listening. First up was Haitink's LSO Live recording of four and eight. A disc containing two of my favourites already has a lot going for it, but when played this well, with this much energy, you really cannot go wrong. It is a quite exceptional disc. 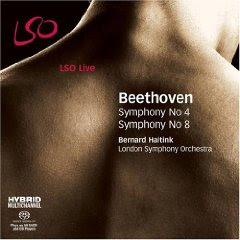 Another eight followed, this time coupled with the second and from Colin Davis in Dresden. Here freshness comes not so much from out and out excitement but rather the stunning range of textures (well recorded by Philips) that Davis produces. 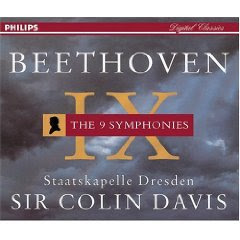 Then it was over to Furtwangler for five and seven with the Berlin Philharmonic, from wartime recordings, live and in remarkably good sound quality. Like most Furtwangler, live is preferable to studio, and these should be heard (unless you object to them for political reasons). 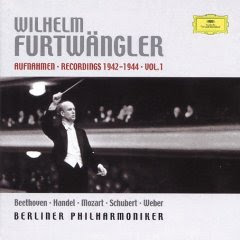 Which brings me to another interesting question. Owning a 160GB iPod, there is plenty of choice for each symphony whenever I'm on the move. Normally. Sometimes, I'll only take my 16GB iPhone. Then stark choices have to be made: as ViolaMaths revealed, she has no Beethoven symphony on her phone. I do have a complete cycle on the iPhone, but I limit myself to one recording per work (with the exception of Sondheim's musical Assassins, where I simply cannot choose). So, what is the desert island Beethoven cycle on my iPhone:


Most heavily represented is Charles Mackerras. Though not, as you might expect, by his SCO cycle which is musically the better, but rather the RLPO on EMI (whose engineers did a much better job). 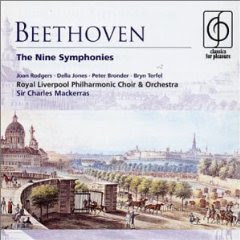 The Barenboim may not be technically the best, and in some ways Mackerras's 2006 concert was a more compelling performance, yet it is special because shortly before the recording they performed it in Edinburgh, and it remains one of the more powerful concerts I've attended. 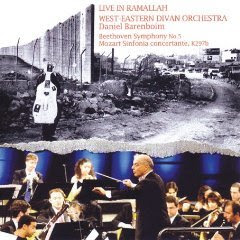 Kleiber, as I've noted above, is one of the few who makes the 6th compelling for me. 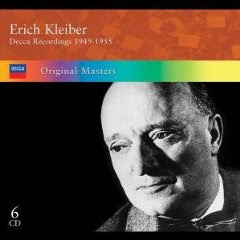 The Gardiner is special as it was my first complete cycle. The fourth still stands out, but overall I don't find it so persuasive. 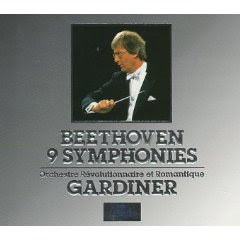 Some may be wondering where Carlos Kleiber's legendary recording of the fifth has got to in all this. Well, it is a very good recording and has a lot going for it. (If you think it's the bee's knees, you may not want to read the rest of this paragraph.) At the same time, my enjoyment has been marred ever since someone pointed out to me the obviously botched edit going into the finale. Such things shouldn't matter, but just like the sound quality on the Mackerras Edinburgh performances, it's a needless blemish. 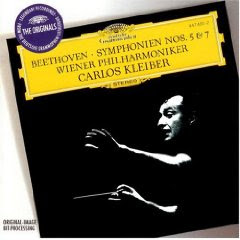 Where, too, is Jochum, in any one of his three fine cycles. Perhaps the iPhone needs a shake up......

Email ThisBlogThis!Share to TwitterShare to FacebookShare to Pinterest
Labels: Tam

You weren't the only one who spent a lot of time with Beethoven numbers. In fact the phenomenon continues to spread - several of my non-tweeting friends have since taken up the (almost impossible) challenge of symphonic ranking that Miss Mussel originally set. For the record, the number I came up with was 396457812, although this number is certainly a variable, not a constant, depending on mood!

There's an interesting recording of the 7th - Bernstein's "final recording" with the BSO that's most definitely worth a close listen to.

Actually - I have that disc (haven't got round to listening yet - it's part of a box set of various Bernstein Beethoven recordings).