In a way, it's oddly fitting: this is, after all, the year of Homecoming Scotland. For the last two years, the Royal Scottish National Orchestra have been homeless in Edinburgh during their regular season concerts. While the Scottish Chamber Orchestra can decamp to the Queen's Hall, where the majority of their concerts anyway take place, there really isn't another suitable venue for the a full symphony orchestra. They've played assorted odd days and times in the Festival Theatre. Unfortunately that wasn't designed to host a symphonic concert and, consequently, it is acoustically far from ideal. However, the Usher Hall is now finished, or, at least, finished enough to be used for the season; and so the RSNO could come home: 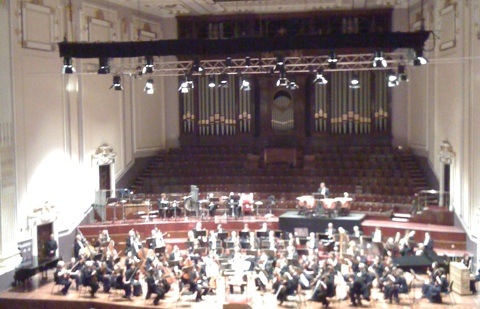 Well, their Edinburgh home, anyway, before someone points out that Glasgow is where they're based. It's great to have them back in one of the finest concert halls of its size in the UK. Better yet, perhaps the hall's management read this. They have finally done what we asked and put visible signs outside the auditorium doors indicating seat numbers. Sadly they didn't check them first. The signs in the Grand Circle have two rows, with different numbers, both labelled A-G (when clearly one was meant to be the first few rows and the other the rear ones - since they are different). But enough such talk, what about the music?

Appropriately enough, Stephane Deneve kicked off the evening with some fireworks: Oliver Knussen's Flourish with Fireworks, to be precise. A fun four minute orchestral showcase, originally written for Michael Tilson Thomas's first season at the LSO, it made for a perfect curtain raiser. The orchestra played well, including a some lovely solo flute work from Katherine Bryan and some wonderful pizzicato playing.

Then Deneve returned to the stage and picked up the microphone and proceeded to talk for longer than he'd just played for. Did we really need to know he had a new podium made by one of the violas? Yes, it's great that Knussen has a history with the orchestra, but did it in anyway aid our appreciation of the music to have Deneve examine what seemed to be his entire family tree for their Glaswegian connections? The proportion given over to the second Knussen piece was small in comparison. Talking to the audience can be done well, especially when the conductor links together the pieces in the programme. If Deneve is going insist on carrying on with this, he would do well to get in touch with his compatriot Pierre Laurent Aimard who may be able to show him how it is done.

The second Knussen piece was The Way to Castle Yonder, from Knussen's opera Higglety Pigglety Pop!, which has just been released on to DVD. A slightly longer piece and scored for smaller forces, this was superbly textured, especially in the first section, with the orchestra vividly calling to mind the horse drawn cart, down to the clip-clop of the hooves. It only left one eager for more.

The stage was then reset once more for Mozart's piano concert K491 (for some reason the programme omits the K number - perhaps that isn't cool these days - and it was the second paragraph before the key got a mention). Last time I heard Deneve play Mozart, I didn't entirely get on with him. It was much the same this time round. There was nothing inherently wrong with it, per se, it was just that I would prefer something altogether crisper and more agile in this repertoire. Of course, there is a way to bring of heavy Mozart, you have only to listen to Furtwangler, but to me this fell uncomfortably between the two. The pianist was Lars Vogt. Certainly he can play very beautifully, cadenzas especially so, and he is superb from a technical standpoint. But, to these ears, he lacked that extra sparkly I find in, say Paul Lewis. However, this is the sort of thing where it's just a case of personal taste (others will doubtless read this and be shaking their head in bafflement).

They had saved the best until last, and the piece gave the concert its Arabian Nights title: Rimsky-Korsakov's Scheherazade. Deneve is often at his best when he gets a chance to exhibit his flare for the theatrical, never more so than in the superb Celebration of Poulenc. Scheherazade is not quite so overtly dramatic, though, and while the composer himself eschewed the narrative headings that have come to be attached to its movements, you can hear why they've stuck.

To make matters even better, Deneve drew wonderfully rich playing from the orchestra, while holding them in tight control and thereby achieving maximum drama, turning on a dime from thrilling fanfares to gentle string playing. Amidst this, no more so that at the start and end of the piece, guest leader Mia Cooper tugged at the heart strings with her solos. There were very fine contributions from the principal flautist (again), bassoonist David Hubbard and some fiendishly rapid trumpet work from John Grace and Marcus Pope (not to mention the expended percussion section, and, frankly, the whole orchestra). The finale provides a real orchestral tour de force, but the work opts not to close with a showy tumult, rather returning to the beginning, to the violin and soft strings via a beautiful series of rising wind chords.

There was but one blemish, the three somewhat 'tired and emotional' gentlemen, wait, yobs, to my right, one of whom appeared to believe Rimsky-Korsakov had scored a part for him to sing, who not only made a lot of noise but, with inexcusable rudeness had a go at a person in front who had only attended the second half. Next time some politician mouths off about anti-social behaviour and the youth of today, I'll remember these three people of advancing years, in the Usher Hall for a classical music concert. I wish I'd had the courage to give them a piece of my mind (but the last time I did that, I got threatened with being beaten up, that too was at the Usher Hall).

However, sour taste though that leaves, it shouldn't detract from what was an otherwise superb second half, a generally fine concert and a great way to re-christen the Usher Hall for regular season use. It's good to be home.
Posted by Tam Pollard at 01:34