Monday Night Film Club - Should you stare at The Men Who Stare at Goats?

It's been rather too long since my last film review and, indeed, my last visit to the cinema, so it was nice to be back in the Cameo full stop. 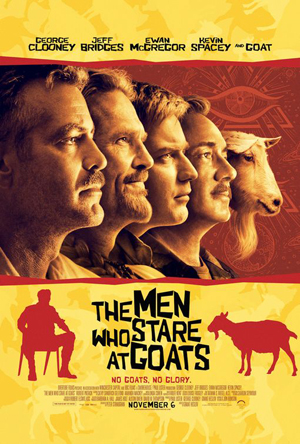 When I first saw the poster for The Men Who Stare at Goats, I assumed it was the new Coen brothers movie (the title seemed suitably daft, Bridges and Clooney are both veterans of their films and the typeface isn't a million miles away from that used in the Burn After Reading poster). It's not though, that is A Simple Man which has just opened here. However, it certainly does feel a little like it.

For starters, and I suspect I may offend Coen brothers fans at this point, there isn't terribly much of a plot, or much satisfaction at the end, and there is a general absence of characters I care terribly much about. Ewan McGregor plays Bob, a distinctly second rate journalist whose wife has left him for the editor. He heads to Iraq where he falls in with Lyn (played by George Clooney). Lyn is, it turns out, a Jedi and on a secret mission to rescue his mentor (Bridges) from the clutches of the dark side (led by Spacey). Now, the makers of the film are clearly under the impression that because McGregor played one in the three rubbish Star Wars films, it is therefore hilarious when he says the word Jedi, or when anyone else says it to him. And while it does produce a wry smile the first time round, once we get to the fifteenth one can't help but think this is a script/casting combination that seemed like a really good idea after a few pints in the pub and that the acting talent on display here is somewhat wasted.

It seems that in the 60s the US Army decided it would be a good idea to explore the paranormal, culminating in an attempt to kill a goat simply by looking at it, and thus give the film its title. This all provides for the film's second joke: to make fun of weird and wacky beliefs and hippies in general. And, to be sure, it does this very well: highlights include the disco dancing soldiers, a general attempting, and failing, to phase through a solid wall and Lyn being so distracted by his attempts to burst clouds that he crashes into a rock in the middle of a deserted desert road. However, the trouble is, aside from a lovely moment where they run over an Iraqi whilst protesting he's safe because they're Americans and here to help, it is just these two jokes that sustain the film. That might do in an hour an a half sit-com, but when stretched to ninety minutes, quite a brief film by modern standards, it feels a bit long. It isn't helped by a structure that is very heavily reliant on flashbacks.

None of which is to say it's a terrible film. It's actually rather enjoyable and they're are plenty of laughs, even if they're mainly the same ones. At the end of the day, sit back and stick your mind firmly into neutral. Not unmissable by a long shot, but there are much worse ways to spend an hour a half.

We're told at the start it's based on a true story. I have little difficulty believing that the US and Russia, each afraid the other might be, wasted time and money looking into this hokum, but beyond that..... well, let's just say I don't think the goats have much to worry about.
Posted by Tam Pollard at 00:45