Stéphane Denève and the RSNO do some Graffiti

Magnus Lingberg's Graffiti represents the biggest and most adventurous piece of programming so far in the RSNO's Ten out of 10 series, in that it was the feature work of the concert, having the entire second half to itself, and the largest piece to date.  Contrast this with earlier efforts which have tended to be sandwiched into programmes built around big and popular works.  The orchestra is, therefore, to be applauded. 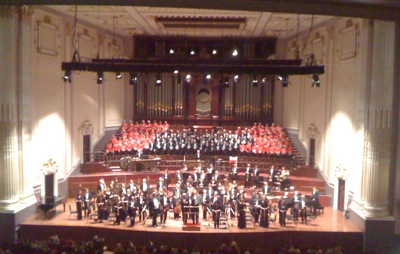 I'm not hugely familiar with Lindberg's music, but Eric Sellen's programme note (whose contributions are, in my view, a weak link of the series) seemed to spend an excessive amount of time apologising for the choice of Graffiti to represent Lindberg.  It seemed odd when reading it before the concert and odder still after the performance.

Graffiti is based a series of scraps of inscriptions from the city of Pompeii, arranged in seemingly random order, some resurfacing several times.  Throughout the sixty-three scraps of graffiti we thus have such fragments as "Loving greetings!", "The best fish sauce" and "Here Harpocras had a good fuck with Drauca for a penny", not to mention the story of a stolen bronze pot and the reward for its return.

The work beings with ominous low bass chords, complimented by the contrabassoon, a superb solo performance from Nicholas Reader.  Then the RSNO chorus made their first entry, with haunting effect, to sing about that lost pot.  Indeed, it is Lindberg's orchestration and the textures he requires of the choir that make the piece really special.  When the fragment about the pot returns, the line passes between a series of soloists peppered throughout the choir, creating a three dimensional hubbub.  Later, when, in hushed voice, the choir announced the market days of various towns and cities, it almost sounded as though some strange electronic processing were being done, so etherial was the result.  This passage comes after the work's biggest climax, perhaps signifying the eruption; it ends by fading to nothing.

Denève had advised us not to try and follow the text, due to the somewhat random structure of the text.  It was also tricky as, finely textured and wonderfully effective though the RSNO Chorus were, making out the words clearly was often not possible.  And yet, follow one could, for the most part, and I think doing so enhanced the power of the piece.  The music is appropriate to the text and there is something powerful about the somewhat mundane nature of it, especially at the end - every day life has been permanently interrupted, mid flow.  This is a piece that is atmospheric and powerful (and doubtless very difficult to play and sing, not that you'd have known that given how well they did it).  I'm very glad to have heard it (so much so I've already acquired Sakari Oramo's recording with the Finnish Radio Symphony Orchestra); hopefully it won't be too long before we see some more Lindberg on the programme.  More fool the extremely dour couple in the dress circle who decided not to come back after the interval.

The evening had begun with Ravel's Le Tombeau de Couperin, which I mainly know from the piano version (and Louis Lortie's sublime recording).  This version shows Ravel's genius for orchestral colour and texture and under Denève's direction the RSNO gave a beautiful reading with oboist Emmanuel Laville providing some special solo contributions.  In his introductory talk Denève spoke about the work's nostalgia and this was particularly apparent in their phrasing of the final chords of the first three sections (incidentally, his talks seem much better this season and much more focussed on the music).

Imogen Cooper then joined them to perform Mozart's 20th piano concerto, not one of my absolute favourites, but a joy to hear none the less.  Cooper gave a lyrical and poetic reading, with plenty of delicacy to her playing.  She is also a charming and engaging stage presence to watch.  Beneath her the orchestra delivered solid accompaniment, with plenty of the bounce that good Mozart performance often has and a nice degree of punch in many of the sections without the piano.  Importantly, though, Denève always knew to pull his forces back when Cooper came back in, ensuring she was never swamped.  All in all, sublime stuff.  Yet, given Mozart wrote 27 concerti, it is a bit of a shame we only ever seem to hear the same half dozen or so in the concert hall.