What does the Berliner Philharmoniker have in common with my favourite comic book? Don't fear, I'm not about to claim that they like to wear their underwear over the top of their trousers or that they are endowed with superpowers and like to fight crime of an evening. The comparison is rather more prosaic: that they have both been descried as the greatest. Actually, I'm cheating slightly since the Observer article that prompted this post went for 'best' rather than 'greatest' and because, rather cheekily, Stan Lee bestowed the title on his own creation way back in issue 3, but why waste a good FF reference. 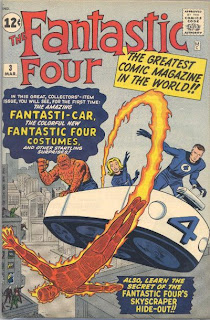 Now, while the Fantastic Four are firm favourites of mine (probably something of a minority position), are they also, as Lee claimed, the greatest? In many ways, and from a literary perspective, there are other comics that would have a much stronger claim to any such moniker. But having a soft spot for something is very different to claiming it as the greatest (the reasons for my love of them belong to another post, one that I hope one day to find the time to write). Regardless,  I have no objective argument that they are either the best or the greatest, and have no desire to find one: there are so many great comic books and much the same is true of orchestras.

The Berliners are fabulously talented of course, as their recent four day visit to London showed. It was an awesome display of technical prowess. But was all that better than absolutely everyone else? Even the Guardian's own 4-star apiece reviews for the full orchestral concerts throw this into question. Last August the Concertgebouw came to Edinburgh and played Mahler's third symphony, just as Rattle and the Berliners did last week. In both cases there was some stunning playing and, while the listener might prefer one interpretation to the other (neither entirely convinced me), the level of hair-splitting required to argue that the standard of one orchestra exceeded the other is at a scale where things are pretty meaningless. I imagine, if past experience is anything to go by, it will be a similar story when Jansons brings his other band, the Bavarian Radio Symphony Orchestra, to the Southbank at the end of this month. And, judging from their website, that concert is as sold out as the Berliners were.

Of course, all three orchestras I've mentioned so far hail from continental Europe. Cue this piece in the Guardian asking: "what would it take for London to field an orchestra as great as this?", immediately excluding everyone outside the capital such as Rattle's own fine alma mater. It suggests the problem has roots in London's three major orchestras: the LSO, the LPO and the Philharmonia (ignoring the RPO and the BBCSO), the premise being that this yields quantity at the expense of some quality. Here's the thing though, London has more than double the population and about five times the GDP of Berlin (if wikipedia is anything to go by), so it doesn't require a great leap to imagine that it should be able to support more orchestras. And let's not forget that the BPO, while certainly the most famous, isn't Berlin's only orchestra. There is the Berliner Symphoniker, the Konzerthausorchester Berlin, the Deutsche Symphonie Orchester Berlin, not to be confused with the Rundfunk-Sinfonieorchester Berlin. And that's before we get onto the Berlin Staatskapelle, the pit orchestra of Berlin's Staatsoper who give regular orchestral concerts (and who were in London last year with Barenboim to play all Beethoven's concerti). If only those silly Berliners had had the sense to plan things more carefully, they could have consolidated these ensembles into the kind of super-group that could rival the Berliner Philharmoniker..... oh, wait a minute.....

Another criticism is that they are overworked, constantly dashing from recording studio to concert to film music session. And, certainly, following the LSO on twitter does show they get up to more than you might expect. But on the other hand, I love the diversity that is a result. Let's put it this way, I think the London Symphony Orchestra is pretty proud to have Star Wars on their C.V. and if they're not they certainly should be (well, the original three anyway). Could you remove this range without losing something in the process?

Of course, an orchestra can be over-worked and as a result underrehearsed or under-energised for a concert. And if this were commonplace it would be a problem, but I'm not convinced it is. Furthermore, were we to take the step of bumping up state funding, I'm not convinced it would mean orchestras working less - why would an organisation give up perfectly good revenue (not to mention the kudos of Star Wars and its ilk)? More likely it would go to inflating salaries. Now, you could well argue that top orchestral talent is underpaid in the UK, but I'm far from convinced hiking wages would lead to a hike in quality. According to this Guardian piece, basic pay in the much troubled Detroit Symphony Orchestra is $105,000, which I'm pretty confident is more than most players in UK orchestras take home. But how many of us would want to swap the DSO for the LSO, the Hallé? And, as the original article notes, UK orchestras do not lack virtuoso players.

Yet I'd go back one step further and question whether the gulf between the Berliners and the Brits is all that large, or there at all. Yes, the Berliners displayed some quite stunning orchestral playing over the course of their four gigs, but so did the LSO in their recent performance of The Kingdom, complete with wonderful string playing, as rich as you like, and the RSNO can get super-pianissimos to within spitting distance (though it's true that the RSNO don't show quite the consistent excellence that the Berliners did over those four concerts).

One of the most insightful aspects of attending all four of the Berliners' London concerts was how much more appreciation it gave me for my home team, the Scottish Chamber Orchestra, whose main concert base, the Queen's Hall, is just a few minutes from my front door. The first came in overlapping repertoire. In their second concert, the Berliners played Stravinsky's Apollon musagète, a work the SCO had performed for us up here not two weeks earlier. The second performance by no means put the first in the shade. More telling still was Rattle's Haydn 99 which left me a little cold. Given the revelations Ticciati and the SCO have been providing with late Haydn recently, I know which team I'd take to my desert island to perform some. I'm sure similar things could be said elsewhere: how would the choice between Rattle and the Berliners and Elder and the Halle look for some Elgar?

So too with an other aspect of the Berlin coverage, the high praise of the solo playing from within the orchestra, not least from this very blog. To quote that Guardian leader: "I am not the only one who has been gripped by the heart-stopping playing of principal viola Amihai Grosz". Turn back again to our own Scottish Chamber Orchestra. I regularly sing the praises of principal cellist David Watkin - whose orchestral equal in terms not simply of quality, but also elan and drama, I've yet to find. Put it another way, if you offered to swap out Watkin and others such as flautist Alison Mitchell, clarinetist Maximiliano Martin and bassoonist Peter Whelan for their Berliner Philharmoniker counterparts, exceptionally talented though they are, my reply would honestly be thanks, but no thanks. Doubtless similar stories could be found at other orchestras (the RSNO's principal trombonist and flautist spring to mind).

None of which is to say that the BPO aren't absolutely top drawer - I don't think you could pick another orchestra and win an argument that they are technically superior. But by the same token, I don't think you can credibly argue that they're head and shoulders above absolutely everyone else. There are other ensembles on the same level, and yet others in as close to striking distance that the splitting of hairs is needed to distinguish them. And, one brief mention aside, I haven't even ventured to America and, say, the wonderfully distinctive sound of the Chicago Symphony Orchestra, whom I still dream of one day hearing live.

We live in a time where orchestral excellence is widespread and plentiful and we should perhaps celebrate that a little more. I probably nitpick too much too many of the concerts I go to, and may be unmoved by some of the interpretations, but poor playing isn't something I come by all that often, excellence by contrast is frequent. Given that, it doesn't much matter to me who is the world's greatest.
Posted by Tam Pollard at 22:54