I've been keen to see Duncan Jones's Source Code ever since I first heard of it, primarily because his feature debut, Moon, impressed me greatly two years ago. 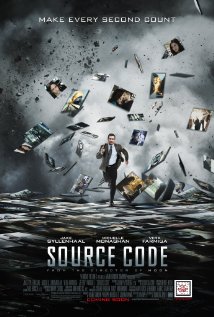 Though it has a different writer (Ben Ripley), and Jones shares no story credit, the film has a lot in common with its predecessor. Firmly science-fictional, it focuses on a central character in a claustrophobic environment: both the eight minute segments of time he is forced to repeat and the capsule he finds himself in after each mission. Similarly, his interactions with Colleen Goodwin (Vera Farmiga), who might best be described as mission control, via only a computer monitor, have a certain something in common with GERTY. Chesney Hawkes' The One and Only, which features as Christina's ringtone, is also a nice callback to Moon. Here, as there, it has a wonderful dramatic irony, since, of course, he is not (though in a different way).

The eight minute stretches are the work of the titular source code, which allows army helicopter pilot Colter Stevens (Jake Gyllenhaal) to relive again and again the last eight minutes of the life of a victim of a terrorist bombing in the hopes of unearthing evidence to prevent a further atrocity. Obviously reliving the same eight minutes again and again would get rather tedious, so what the source code actually does is let him dip into the myriad of possible alternative universes suggested by quantum theory, one existing for every possibility and choice, and explore other outcomes.

This leads to both heightened drama as he searches for information with increasing desperation, and also comedy as he anticipates conversations or chides Goodwin for a less than helpful suggestion. We also see him fall in love with Christina (Michelle Monaghan), despite the fact that this is the past, and no matter what he does there, he cannot alter it in his universe.

Unfortunately, it falls short of the standard set by Moon. While there are interesting moral questions raised, they don't seem so crucial to the film and it feels like the explosions are more important. In addition, the big twist midway through did not take me by surprise. Both revolve around exactly what the source code actually is, precisely how it works and how Stevens fits into it.

Other complaints fall more into realm nitpicking. We are told that the train has been destroyed by a bomber suspected of having a dirty bomb with which he hopes to destroy Chicago. The train has been merely a demonstration. Here's the thing: there's no good reason why the bomber would do this. Why do they need a demonstration when they're not after a ransom or anything? Surely all the demonstration serves to do is risk their exposure in some way that might allow the authorities to thwart them. Given the whole plot was built to provide a crisis for the source code to avert, this really should have been tighter. In addition, the second bomb, though potentially devastating, is in no danger of being big enough to have the effect the culprit desires.

Then there's the question of time. The original bombing takes place during the morning commute, yet they manage to get emergency services to the scene, identify a suitable body, transport it all the way to Nellis Airforce Base in Nevada, get it hooked up to the source code, and then run umpteen eight minute simulations (with time between) all before the bomber can go from destroying a train on the outskirts of Chicago to blowing up the middle of Chicago. One can't help but think they are grappling with a vilain so incompetent that it surely doesn't require this scientific marvel to apprehend them.

The film is good at keeping us guessing as to who the bomber might be, and throughout my suspicions flitted here and there, including onto Christina every now and then. That said, at times it is a little lazy - Stevens' first suspect is a muslim man he roughs up, with even Christina remarking on his use of racial profiling (it's also obvious to the viewer that this can't be the person, since it's far too early in the film for that). The problem is it feels like something we've seen so many times before, whereas at many other points the film feels fresh.

The biggest niggle, though, comes with the ending. Or rather, the second ending. The first is actually perfectly judged. However, it then feels like another shinier, happier one has been tacked on. Now, normally I'm the last to object to a soppy ending, but this one doesn't fit with the science that has been established and wasn't really needed, since the first provided a nice degree of closure, especially, and beautifully, of the relationship between Stevens and his father. Indeed, when his father was first mentioned, my first thought was, not again. The cliche of the dysfunctional father/son dynamic is in my view overdone. Yet here it is so beautifully done that by the end one cannot complain.

It's not by any means a bad film. It's ninety by and large extremely enjoyable minutes, particularly if you don't think too hard or look too carefully for holes. Performances are uniformly strong, the film is beautifully shot, and Jones maintains the tension well. It just feels like it could have been more, and if I seem to be judging it by a very high standard, it's only because Moon set such a standard.
Posted by Tam Pollard at 00:24