I like to download music. Somewhat atypically, however, I do so legally and that is hard. In fairness, with the likes of Apple's iTunes it's fairly easy if you don't mind about quality, but if you want something that sounds at least as good as a CD then good luck to you. This is a subject I've moaned about before, though there are some, such as Linn Records, who do it well. The Classical Shop is more mixed and in some ways has actually got worse since I last wrote about them - their download manager (mandatory) locks up your browser completely and the tagging on the last thing I bought (Louis Lortie's Beethoven sonatas) was a total mess, with discs wrongly numbered and tracks incorrectly titled.

Passionato, which launched about three years ago, should have been a winner; but it wasn't. For one thing, huge swathes of their catalogue was available only in MP3. Some Universal stuff has recently started to appear in lossless FLAC but this is still patchy and not a unique selling point since DG and Decca's own web stores have virtually their entire catalogue in FLAC (save, bafflingly, a few recent issues). However, one of its biggest selling points is that it is the only place I'm aware of where you can get EMI Classics as CD quality downloads.

Or, rather, was the only place you could get them. A little over a week ago I received a tweet from @meltsheep expressing confusion that he could find no Klemperer downloads there. This immediately struck me as odd since sitting in Songbird just now I have two Klemperer recordings I purchased from Passionato earlier this year (a Brahms Requiem and a Tchiakovksy 6th). But a quick search of their site proved him right.

Well, there is one result but it is not for Otto Klemperer (the disc of Gurrelieder pictured above features his son Werner). I should say at this point that I'm accessing the site from the UK, so overseas there may be different results. However, it still begged the question: where's Klemperer? And, it soon transpired, not just Klemperer. A few more searches turned up nothing but Universal discs (DG, Decca and Philips). I tried a different tack; after all, the site proudly bears the legend that its range includes EMI and BIS too "with more being added all the time":

Clicking on EMI I tried a label search but found nothing:

The same is true of BIS:

Indeed, try as I might, I can locate nothing non-Universal. But this doesn't appear to be a simple culling of labels. A look at the front page reveals the top rated list and the featured staff picks feature BIS, EMI and Chandos: 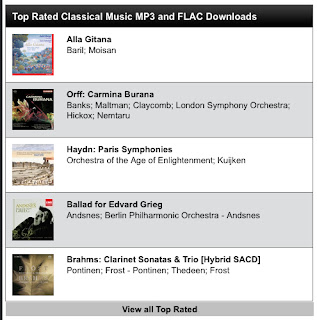 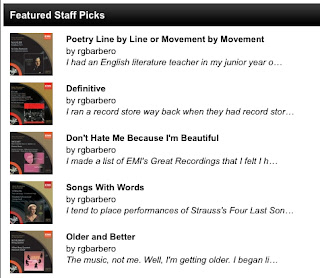 Yet click through on any one of these and you will find it is not available:

What about the "thousands of great special offers" that greet you loudly on the front page? 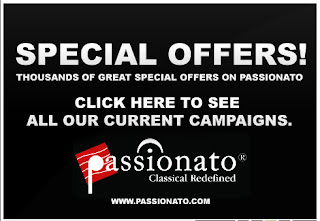 Alas, they are invisible: 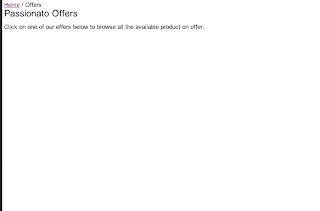 If the labels have simply been dropped, even if it is only a temporary rights issue, why keep them on the front page? How can the top sellers all be unavailable? Why does clicking on 'special offers' bring up a blank screen? No, this is a store that looks dead.

And it isn't just the store. I queried their vanishing catalogue via twitter, but nobody at Passionato's account was answering. Indeed, it has been inactive since 21st July, their Facebook page since 4th January. A wall post on 14th August from a customer who appears to be wondering the same thing as me has also gone unanswered. Last Wednesday I dropped them an e-mail. But answer came there none. I tried to contact EMI too, but their contact us page in the UK gives nothing but a postal address. I know some record labels want to pretend the last few decades didn't happen, but even by those low standards this is impressive.

If the store is dead it isn't the end of the world. Universal is well served by its own stores. Chandos and many other independents are available via The Classical Shop (though it is flawed). BIS may have deserted because of eClassical (which has a lot of overlap with The Classical Shop, but is predominantly BIS and seems better priced and a better user experience). But what of EMI? There appears to be no legitimate avenue, which is a great shame.

Of course, it could all be a misunderstanding - we'd love to hear from Passionato about what is going on, or from EMI about where we can buy their music as lossless downloads. I shall not be holding my breath though.
Posted by Tam Pollard at 00:30

Let me apologize up front. You are certainly right; we have only Universal on our site at present. We had difficulties with the other labels on financial terms; one of the labels wanted a huge cash advance (which we couldn't afford) and the other had unreasonable payment terms.

The background story is we determined about a year ago we couldn't sustain a company with just downloads. The conversion from physical to digital was stalling. We decided to buy the assets of the Musical Heritage Society, one of the biggest sellers of CDs online. We took them over in June, and during the intensity of the sales negotiations and then getting the operation rolling, I'm afraid we neglected the Passionato site. We were getting very low traffic there, once we stopped sending out emails (last spring) but that's no excuse. Our customers deserved a letter or an email from me.

Our first objective is to get Musical Heritage Society back on its feet. It is a about ten times the size of Passionato. Our second goal is to combine the physical and digital products on one page. We think we will be the only store that can do that. Meanwhile, we will start adding back product into the Passionato site within the next few weeks.We are in intense negotiations to bring some more major labels /distributors to add products of all formats.

So,I'll have to ask for your patience.In the meantime, check out http://tinyurl.com/3secscq, our new site, and look at the MHS introduductory deals, if you primarily buy CDs. Otherwise, come back to Passionato, I'd say, in February 12 to see what we've done by then.

Thank you for your patience.

It does sometimes seem like some record labels don't actually want to sell their music as downloads - why else charge big upfront fees? It's a shame the market doesn't seem sustainable, which again feels like it can only be because certain players don't want it to be.

I look forward to the new site.

@James - when are the big labels going start releasing hires remastering of their classic recordings? There will be a mad frenzy of audiophiles if for example the Solti ring makes it out on 24/192.

As a follow up in June 2012, I can find no download link at the Passionato website whatsoever. The company is mostly flogging Musical Heritage Society memberships. Too bad.

Thanks David - it is a great shame.

I actually had seen that and it's mentioned in my more recent post rounding up download stores (link below), but I hadn't got round to updating this post.

Everyhthing James Glicker touches turns into pure dung. He has no business sense -- He's all ego and no intellect. Arrogance and ignorance are a fatal combination, so all his ships sink -- as he so deserves.

Apologize? James, you ruined the Baltimore Symphony, destroyed BMG Australia, made a laughing-stock out of BMG Classics, and you were fired from at least 8 different dot-com businesses. Passionato was a financial loser from the start (as everybody knew, which is why nobody with solid business knowledge had ever started such a business. James, you're an idiot!

James Glicker? An idiot to be sure, but more specifically he's a total whack-job. The internet is full of reports of his failures - he'll never get another job.