Berlin's Philharmonie impressed me greatly on my last visit, both for its design and its acoustic. If anything, my second trip leaves me more impressed. Initially I was concerned we'd been shortchanged on our tickets: pretty well side on with many of the band facing away, this did not seem like the second price bracket from the top. And yet excellent seats they proved to be, not only providing a fine view of both conductor and soloists but also seemingly not suffering acoustically. Sit in the nearest equivalent seat in Edinburgh's Usher Hall and you'll struggle to hear the cellos properly. 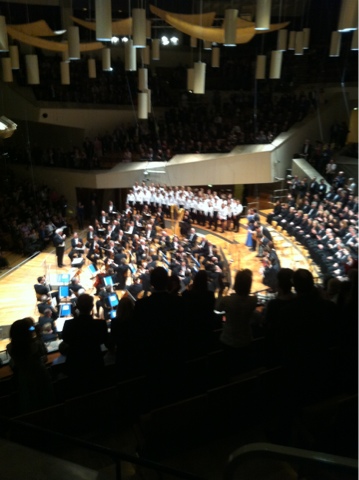 We were there to hear a concert performance of Bizet's opera Carmen, conducted by Simon Rattle and with soloists Magdalena Kozena and Jonas Kaufmann in the lead roles. It is far from being my favourite opera, but when performed as well as this, it made for a thrilling evening.

Kozena dazzled in the title role, in large part due to her dramatic stage presence, whether she was dancing seductively for Don Jose, clicking her castanets, or scornfully rejecting him later on (not to mention her flirtation with some of the wind section). Vocally she was on fine form too.

Kaufmann's singing probably stole the show overall, such as with the power he displayed in a long entry from offstage, building to an impressive climax as he entered. His acting was excellent too, and together they made a compelling pair of lovers.

Perhaps inevitably, the rest of the cast paled somewhat in comparison, though that is not to say they were in any way weak; they weren't. The chorus and the children's chorus of the Staatsoper also sang well.

On the podium, Rattle kept a firm grip on proceedings. Often he took quite brisk tempos, and it is a testament to the skill of the Berliner Philharmoniker that they responded superbly to whatever demands he placed on them.

All told, it was rather a treat and possibly the most satisfying live performance I have attended by this team. Certainly it was well worth having to get up at 6am on a Sunday last month in order to secure the tickets. It will doubtless appear in the digital concert hall in due course and should be well worth checking out when it does.
Posted by Tam Pollard at 16:07