The SCO present two Weber concertos for the price of one

Saturday's concert, the Scottish Chamber Orchestra's last of 2012, is one of those I have been most looking forward to this season. It did not disappoint.

The reason for my interest was the two Weber concertos at its centre. Now, I am not especially a fan of Weber per se, nor do I know either the clarinet or bassoon concertos terribly well. What made this an interesting programme was the presence of two of the SCO's principals as soloists. This is a good prospect for several reasons. First, the orchestra is fortunate to have a number of exceptional players on hand. Indeed, last year when a newspaper waxed lyrical that the Berlin Philharmonic was hands down the best in the world and cited fine solos as evidence, my response (having attended the same series of concerts that prompted the piece) was that if offered the choice I wouldn't swap the SCO principals for theirs. Secondly, and because of this talent, it's nice to see them given the chance to do a little bit more. 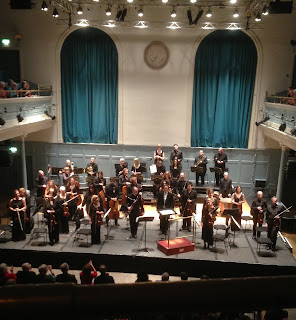 Bassoonist Peter Whelan had his turn first. A few years ago we were treated to his reading of the Mozart concerto and he proved himself no less adept with Weber. Whelan has a beautifully rich tone to his playing and that was much in evidence, especially during the slow movement. In the outer movements Weber provided fiendishly rapid runs which were as breathtaking to listen to as one images they were to play, but Whelan was more than a match for them.  Beneath him the orchestra, under Pablo Gonzalez, provided well judged accompaniment, never in danger of swamping the soloist but packing ample punch where needed. 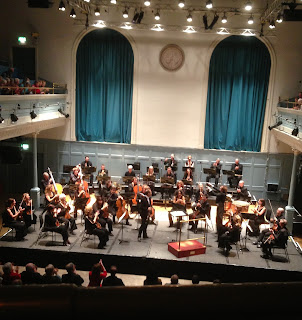 After the interval, clarinetist Maximiliano Martin took to the stage (returned would perhaps be more accurate since he had been heading up his section during the first half, as Whelan went on to do in the second - there is, it seems, no rest for the stars!). Martin played with seemingly effortless charm and great elan. I found his concerto slightly the more satisfying of the two, though this has more to do with the works themselves than any difference in the calibre of the performance. From the grin on his face, Martin seemed to be enjoying himself as much as we were.

The cynical might suggest that using your own soloists is just a good way of saving money, or that it was an effort to plug the orchestra's thoroughly recommendable recent CD which includes both pieces (as well as a concertino for clarinet and orchestra and a horn concerto with the orchestra's Alec Frank-Gemmill). There may be some truth in both those statements, and if there is, all I can say is that they should save money and plug their CDs more often.

Weber was bookended by Beethoven and Mozart. Gonzalez directed a stormy and forceful account of the Egmont overture. Indeed, so much so that early on it lost a little in flow. However, he drove the work to a thrilling conclusion.

The concert finished with Mozart's 25th symphony, which sits on the cusp between his early work and his later and greater symphonies. It also falls into the group of works which I couldn't recall the tune of if asked, but remember instantly on hearing. Of course, the SCO are a Mozart orchestra par excellence, and so it danced along beautifully. One could also hear flashes of what would come later. All the same it didn't quite seem like a big finish, the biggest cheers having already rightly gone to the concertos.
Posted by Tam Pollard at 22:53