On paper, to anybody who pays any attention to the world of song recitals, this was the pick of the Queen's Hall series – a major opportunity for Edinburgh audiences to hear one of the greatest voices of the present day. Although it was announced that Gerhaher was suffering a slight cold, this in no way detracted from a stunning performance. Sadly though, there was a scattering of empty seats and I do wonder sometimes if Edinburgh pays enough attention to the musical world beyond Scotland. 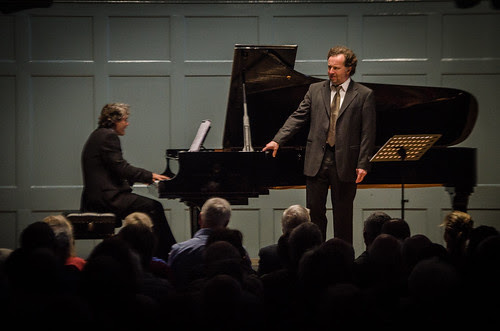 I previously had the privilege of hearing Gerhaher as Wolfram in the Royal Opera's superb Tannhauser in December 2010. That role has very much a lieder feel to it, so I was keenly anticipating hearing him in the real thing. My one small reservation about the programme in advance was that it was an all Schumann one. The Edinburgh Festival, in the years since I've been attending, has seen an awful lot of Schumann and not much of it has especially registered with me as work I wanted to hear again in a hurry. I have certainly heard Dichterliebe Op.48 live in that time, but hadn't remembered it as anything special. For me this was one of those revelatory recitals where the combination of performers and works is like drawing away a veil – you suddenly find yourself thinking, oh, so that's why Schumann is so highly rated.

Gerhaher is a special singer for these kinds of works in many ways. He has the flexibility to go from the quietest pianissimo to fortissimo in a few bars. It's a voice that really makes you feel the emotion – not only in moments of grief or despair but also joy. It's hard to describe but there's a kind of ache, a feeling of agony sometimes in the timbre of the voice that really reinforces the text – for example really making something of the repeated cries of “Ach” towards the end of Dichterliebe. A lot of the time, his whole manner and delivery was so expressive that I stopped bothering to read the English translation. He was brilliantly accompanied throughout by Huber, who also brought plenty of feeling to the places where the piano is dominant for instance towards the end of the same work. 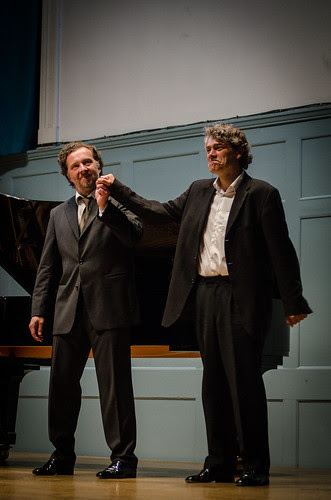 Another pleasure of the performance was that Gerhaher took the opportunity to pair the often performed Op.48 with a number of less well known Schumann songs. Of these I would single out the two little triologies Die arme Peter 1-3 Op.53 No.3 and Tragodie 1-3 Op.64 No.3. The latter which leads from a failed elopement to a new pair of lovers weeping without knowing why beneath the lime tree which marks their predecessors' grave was especially powerful.

Altogether it was a wonderful recital. It ought to have been a sell out.

Photos by Andy Catlin with thanks to The Queen's Hall. More photos from this and other Queen's Hall shows are available via their Flickr page.
Posted by Finn Pollard at 17:27

Re Schumann, might I suggest John Eliot Gardiner's symphony & other stuff set? It is quite wonderful and may change your mind a bit about those works, if you have mixed feelings about them.

Totally unrelated, but I hear that The Man Himself is slated for Troyens in SF in two years. I really thought he'd never conduct there again after the Ring in 2011, and you bet there have been times I have missed him greatly.

@Lisa - Heard some Brahms live from Gardiner once and didn't get on with it - but prepared to give him a try in this.

Lucky you if you get Runnicles for Les Troyens. His concert performance of it in Edinburgh was fantastic.

The Schumann set is really really good - I have never heard his Brahms.

Hoping for runnicles, you bet!