As ever, this year's fireworks concert was a dramatic and enjoyable finale to the Edinburgh International Festival (and, indeed, the summer festivals generally). The elements remain fundamentally unaltered: the Scottish Chamber Orchestra playing in the Ross Bandstand while above them the better part of four tonnes of explosives (or 400,000 fireworks, depending on which measure you prefer) are let off from Edinburgh castle. And while the display is tailored each year, the main variable is the exact musical accompaniment to which it is fitted. Well, the main variable within the control of the organisers, anyway: the weather usually plays some part. 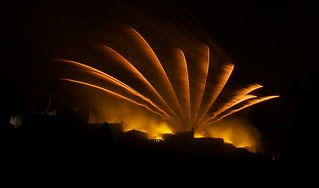 This year it was the turn of Ravel's arrangement of Mussorgsky's Pictures at an Exhibition. This probably represents the most successful choice since 2009 when Handel's firework music last had an outing. The score has plenty of big bangs for Pyrovision to choreograph, but there is also fun to had elsewhere such as the alternating purple flares depicting the crooked legged gnome. Meanwhile the waterfall, my favourite moment of the display, was as beautiful as always. (As I did last year, I just sat back and enjoyed it, having captured it to my satisfaction a few years ago.) It was joined by a second series of mini waterfalls that also made for a nice effect.

The SCO under Gary Walker did a solid job as always, a few rather noticeably fluffed horn notes aside. But then this is always a performance more about the visual spectacle than the absolute musical fidelity one looks for in the Usher Hall. However, this year while I was deprived of my regular viewing spot in Princes Street Gardens, I did end up with a view of one of the big screens so for once actually caught a glimpse of the orchestra. 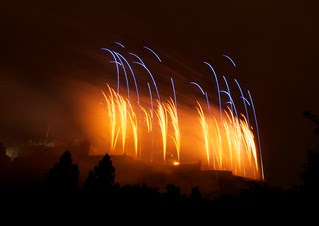 The weather for the most part obliged in not raining. True, it was rather windy, blowing so strongly eastwards that The Mound had to be closed to spectators. Indeed, you can see the effect of the wind in the photographs. That said this did make for a speedier exit from the gardens in that direction than is usually the case, so from a selfish perspective this was not so bad. It's also worth mentioning that you do want some wind. In 2011 it was almost completely still and as a result the smoke didn't clear which wasn't ideal (see photos here). 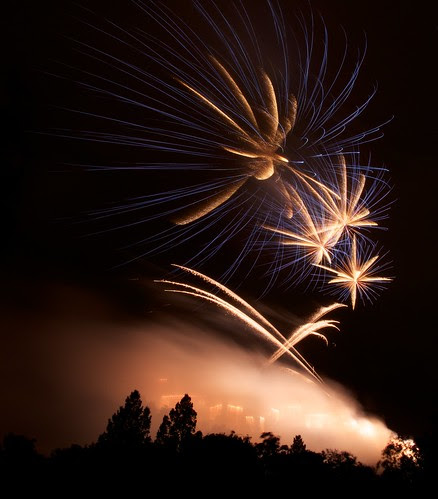 All in all, it was an excellent display and I'll certainly be back to see what they pick for next year. You can see my full photo gallery at Flickr.

For those interested in such things, this year's fireworks represented the first serious outing for my new camera, an Olympus OM-D E-M5 (a mirrorless interchangeable lens camera). This represents a rather pleasing upgrade from my older E-PL1, having a better sensor, better manual controls and a rather nice retro look while still being nice and compact. It was paired with Olympus's 12mm F2 lens (again a new addition since last year's fireworks). This worked well for the bigger effects, though to get smaller ones (such as the crooked legs) nicely I think I would have needed to swap it for something longer. My tripod (purchased for last year) again acquitted itself well, and proved equally adept on the grassy slope of the gardens as it did on more level ground last year.
Posted by Tam Pollard at 17:02