Aldeburgh 2014 - And now for something completely different...Musicircus

It's not often you find Ravel on the programme alongside some bagpipes and Sousa's The Liberty Bell, but all that and much more could be found on Sunday when the Aldeburgh festival returned to the scene of last year's triumph, Grimes on the Beach. This year's use of Aldeburgh beach (or, for the most part, Crag Path which runs along just behind the beach) was in some ways less ambitious, requiring no stage, seating and lighting construction. In other ways, such as the better part of a thousand performers, it was more ambitious. 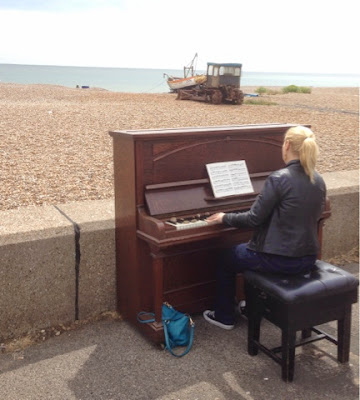 Musicircus is a concept credited to John Cage and first performed in 1967. Effectively it is a carnival of musicians. Think the Royal Mile in Edinburgh at the height of the Fringe (or, dare I say it, that scene a few decades ago before they tightened up on who could perform there) and you should have a rough picture. 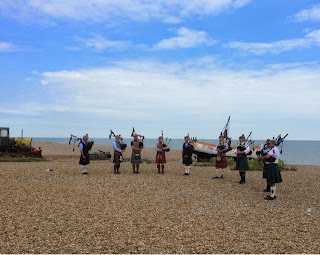 Thus, as one walked from the Moot Hall down to the South Lookout, one could see everything from Tamara Stefanovich playing the piano, looking out onto the sea, to bagpipers on the beach, to children's choirs, to folk musicians. There was amplified music, a street organ, an all age cello circle and much more. For me the highlights were Stefanovich and a young brass quintet whose renditions of the Mission Impossible theme and Sousa's march were spot on. 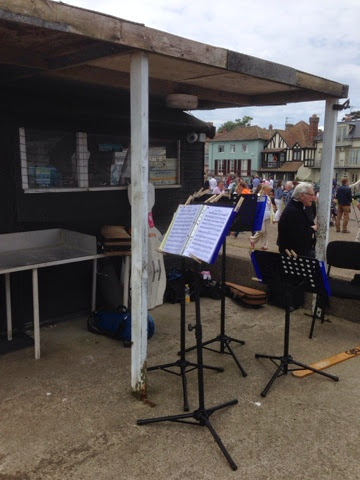 Not everything quite worked. While the event showed the ear's ability tune in and out as you walked from one thing to the next, in a few cases where amplified was a little too close to non-amplified this wasn't always. One room featured both a harpsichord (played by Mahan Esfahani) along with various other keyboard instruments that rendered Esfahani's playing inaudible.

Still, such gripes are small set against what was an immensely fun festival atmosphere. Particularly nice was the intermingling of professional and amateur, old and young. 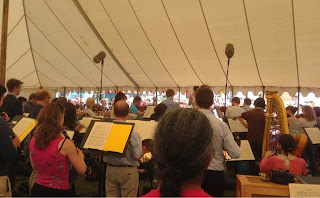 As a culmination, Ades and the City of Birmingham Symphony Orchestra played the end of Ravel's Ma mere l'oye, which they had featured in their more conventional concert at the Maltings the previous evening. Their musicians could earlier have been seen dotted about the town: the brass playing outside the lifeboat station, the winds atop the sea wall and some of the string section playing Bolero on one cello (sadly I didn't get the picture needed to illustrate that). 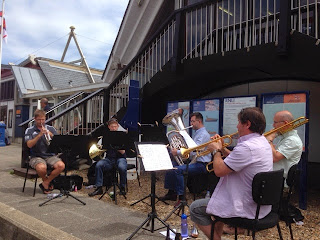 I couldn't help thinking that the Edinburgh festival could pull this off nicely. I could see groups of musicians scattered around the Usher Hall and through Princes Street Gardens to great effect....


Two other highlights since I arrived on Saturday are worth mention. Soloists from the Chamber Orchestra of Europe gave an impressive concert on Saturday morning. The programme included Elliot Carter's superb Eight Etudes and a Fantasy for woodwind quartet as well as a wonderfully energetic performance of Mendelssohn's Octet.

On Monday evening Pierre-Laurent Aimard interspersed Ligeti's etudes with others by Debussy, Chopin, Bartok and Scriabin. He played a similar programme at last year's Edinburgh festival (limited to just Ligeti and Debussy). This was equally impressive, both for his artistry, whether in the fiendish L'Escalier du diable, the cleverness of the hands getting in the way of each other in Touches bloquees, or the beauty of Chopin, and also Aimard's skill in programming, in how naturally it flowed from one study to the next. The concert was broadcast live on Radio 3 and is well worth catching on the iPlayer.
Posted by Tam Pollard at 16:09