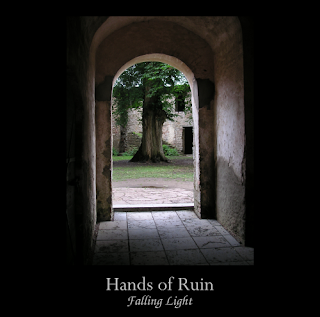 Okay, technically not a CD review, but rather a 320 kpbs MP3 download review, but I'm not creating a new category just for that: CD can cover all recorded music. Not to mention the fact I've burnt it to CD and am listening to that. This review review is also a Shameless Plug, since the artist behind it is our cousin (who clearly shares some DNA with our uncle Thomas Dolby who's also done a little electronic music in his time). Colin describes his project thus:

Hands of Ruin is colin z robertson’s dark electronic music project. My sound is influenced by electronica such as Aphex Twin and Autechre, right through to goth and industrial bands such as Dead Can Dance, Arcana and In Slaughter Natives.

I don't know any of those (although I think some may appear on the sampler CDs he did me in return for the classical samplers I put together for him, and which I haven't had a chance to listen to yet). As such, I probably can't comment as insightfully on this as I can other music.

The EP, Falling Light, contains five tracks which together last a little over twenty minutes. First up is the gently starting, atmospheric (not least the booming drum) and slightly haunting Winter by the Sea. This is offset by a distorting guitar underneath (or over the top - sometimes it feels like one, sometimes the other), and while initially I don't care for this additional texture, the effect is fascinating.

Shadows Across the Path opens with low distorting chords. Again, a sound that it not to my taste. But it, and the drum beat, does provide an interesting base for the flickering, sci-fi textured melody over the top. The base then drops away leaving the melody unsupported, hanging in space, in a way that is probably more effective than if the scaffolding had never been there.

An Inverted Spire is harder to pin down. As the layers build up at the start it rather reminds me of Dolby's demonstration of how The Flat Earth is assembled (I can't track down the original video from the TED conference online, but this should give an idea what I mean). It has a nicely circular feel, in that it disassembles again at the end (though journey does not end where it started).

The dark squelching sounds that launch The Heart of Hell don't quite seem as bad as that, more a sort of dull industrial grind. Is this perhaps meant to signify a heartbeat (an idea that occurs to me only after a couple of listens)? I've listened to this several times and I'm not entirely sure what I think of it, I shall have to keep listening.

Resting in a Cold Place also sounds somewhat mechanical at the opening, but also reminiscent of whatever mechanical or technological things they are resonating in a large room. There is, perhaps, less interest here in what is going on above and around this base than in some of the other tracks, and yet the trick of removing the support at the end is repeated, if, for that reason, with not quite such a benefit.

It's an interesting record, and one that rewards repeated listening, and which is well worth the modest fee. I very much look forward to hearing future offerings. But don't just take my word for it, head over to the Hands of Ruin site, where you can listen the EP before you buy.
Posted by Tam Pollard at 19:14