The aforementioned problems with the Usher Hall have hit the RSNO worse than the SCO not least because there simply isn't a suitably hall in the city to which they can relocate (until the Ross Bandstand gets covered with a brick by brick replica of Glasgow's City Halls - n.b. where's Runnicles is fairly certain that this plan exists only in our overactive imagination, so don't get your hopes up). Last year they went to the Festival Theatre, which is okay for opera, but orchestral concerts? This year they could only relocate about ten concerts there as it was already booked up, and many of those have gone to slightly odd days and times.

Just how unideal an opera house is for an orchestral concert may be illustrated by the picture (below). Those may be acoustic curtains, certainly they are wanted to stop the sound bleeding away into the wings, the whole thing looks a little bizarre though. 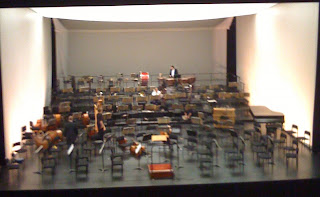 Looks aren't very relevant though, what matters is the sound. But before we could find that out Deneve spoke to us and gave a brief, and frankly, for the most part, rather pointless sketch of the season (the sea and Mendelssohn are key themes, which anyone who's read the brochure would know). I think it was rather tactless to point to Berlioz's Damnation of Faust as a highlight, not that I think it won't be, but because it isn't happen in Edinburgh. His speech only served a useful purpose when he gave a rather moving dedication to Myra Mackay, the orchestra's librarian for almost twenty years who passed away suddenly on 25th September. Prokofiev's Romeo and Juliet was a favourite piece of hers so the orchestra had dropped the overture to Wagner's The Flying Dutchman in favour of The Mongatues and the Capulets and the Death of Juliet. Both were nicely played and the hall didn't sound too bad. Deneve brought plenty of drama to the march and the death was extremely beautiful.

This was followed by Szymanowski's Sinfonia Concertante for which they were joined by Piotr Anderszewski, for whom I have no great love, on the piano. Despite Deneve's effusive praise in his little talk, Anderzewski did little to improve my opinion. This was a shame because the orchestral playing was wonderfully exciting, but it was set against pianism that was a little bland and mundane, though nothing like so much as Trpceski, and too thumpy for my taste. Otherwise it was a very engaging piece, and one that I think I need to investigate on CD. The orchestra's quiet playing, always a good yardstick, was impressive and Deneve judged the transition into the final beautifully.

The second half brought my principal reason for attending: Mahler's fifth symphony. Deneve took a very slow view of the work, perhaps not quite late Bernsteinian, though I wasn't timing. While you can get away playing the work slowly, you need something by way of compensation. Now, to some extent I think the hall may be at fault: while there was never any shortage of volume, there was a lack of weight and richness to the sound, and that hurts Mahler. Deneve's other, rather unfair, handicap is that the last time I heard this work was from Jansons and the Bavarians who had a better trumpet soloist than I ever expect to hear again. The RSNO's opening trumpet, one presumes principal John Gracie, was perfectly decent if a little raspy in tone. However, in general the opening movement was rather dull and lacking in energy. There was very little flow and continuity between the first two movements, which Mahler himself lumps together as part one of the work and which in many fine recordings feel almost one movement. The triangle was almost inaudible in the great triangle punctuated climax, a favourite moment, though again this is likely down to the hall. At the end of the movement he rather bizarrely got down of the podium and took a brief break. A frequent problem in this work is the management of the transition between the frenzy of part one and the idyllic beauty of the adagietto. Since Deneve had avoided the frenzy he had no such problem and the scherzo was much in line with the opening movements for blandness. The horn solo wasn't especially impressive, indeed the horns generally didn't wow me. The adagietto was much nicer, beautifully played and probably the most compelling movement of the performance. With the finale Deneve returned to dullness and again was rather slow, it only caught fire at the very end.

All in all, a slightly mixed opening and one which has me wishing for a speedy reopening of the Usher Hall. Hopefully my next visit to the Festival Theatre, which features the return of Rachel Barton Pine, will be better.