So late it's topical again - Charles Mackerras, Artur Pizarro and the SCO

As regular readers may know, while I've lately been getting most of my reviews typed up pretty promptly on the night of the concert, it is not, and was not, always thus (last June's visit to Amsterdam for St Francis still sits firmly in the pages of my notebook, for example). However, just occasionally the concert becomes topical again in such a way that can make a five month old review seem almost timely.

The time was 7.30 on 31st October 2008, the place City Halls in Glasgow. One of the prospective highlights of the 2008/9 Scottish Chamber Orchestra season when the programme was launched this time last year was, as ever, the appearance of Sir Charles Mackerras. Annoyingly (and doubtless due to the Usher Hall being out of commission), the Edinburgh leg never took place, moving instead to Perth. Given the programme included Beethoven's fourth concerto, possibly my favourite piano concerto, I couldn't really miss the concert, so I caught the train to Glasgow. The main reason a review didn't follow soon after was that my brother was very selfishly having the Edinburgh leg of his wedding the following day (an unfortunate date, since the BBC Scottish were doing Messiaen's Des Canyons aux Étoiles... that night).

So, why is this topical again? Well, having performed the third and fourth concerti, the team then went on to record those and the fifth for release on Linn Records. The result is due out shortly. The Beethoven was flanked by two Mozart symphonies which, thankfully, they are soon to commit it to disc, also on Linn (the same Linn who released Mackerras and the SCO's prize winning recording of the last four symphonies).

To take the Beethoven first, then. We know from their past experience with the symphonies that Mackerras and the SCO are something of dream team when it comes to Beethoven. How then, could they go wrong in the concerti? Actually, I'd heard them do the fourth once before (also with Pizarro) in a rather fine 2006 concert which also included Haydn's 96th symphony and Mozart's Posthorn serenade. Now, in fairness to Pizarro, I'm not really able to objectively review the fourth concerto. This is Kempff's fault. His was the first I bought (the later stereo account with Leitner and the Berlin Phil) and the one I fell in love with. Kempff's delicacy is, perhaps, uniquely well suited to the soft solo piano opening. Other pianists can play softly and delicately though. What makes Kempff so special is his use of his own cadenzas. Beethoven's (of which I believe there are two) don't ever seem to fit quite, doubtless this is a sacrilegious view. The Beethoven cadenza that seems to be played most often is rather showy, the other less so. However, neither seem right in the same way Kempff's simply restatement of the opening theme does - giving the opening movement a wonderfully rounded feel. Probably I listened to Kempff too many times before hearing anyone else, but the result is that performances using other cadenzas just don't quite feel right.

Pizarro selected a fairly subdued cadenza (which I think was one of Beethoven's, but I'm not certain), but didn't quite equal Kempff. A bigger concern was that the clarity of his playing wasn't quite what I would like. I suppose in the years since I first heard him, I've been spoilt rotten by Paul Lewis in this regard, but Pizarro did seem to jumble his notes slightly in the larger moments. Certainly it was nothing like the mumbling style of Richard Goode, but it was a little like a singer whose diction was such that not quite every word could be understood. However, there were no such concerns on the orchestral side, and under Mackerras's direction the SCO were as fired up as they had been for the symphonies two years earlier. Rich and yet agile, beautifully textured with plenty of power when needed, yet never overwhelming the soloist. All I could think was how wonderful a combination they would make with Lewis. 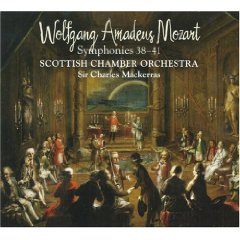 The Beethoven was flanked by two Mozart symphonies: the Paris (31) and Linz (36). Paris was the curtain raiser, and what a start. The opening allegro was given a wonderful bounce and sparkle and the orchestra's playing was impressively tight. Then Mackerras courted disaster: he turned to address the audience. He did so because the Paris has two slow movements: the original in 6/8, which he was told was by the commissioner was too long and in the wrong time signature for the French capital, and the replacement in 3/4. This being Mozart, both are excellent and one wouldn't like to choose. Mackerras didn't on his Telarc recording with Prague Chamber Orchestra or in the Glasgow concert (and doubtless he won't on the forthcoming Linn recording either). Instead, he gave a brief and insightful account of of the differences and then played them one after the other. The first was marked by beautiful playing. The second was much shorter, lighter (in part a consequence of the reduced scoring) and more humourous, and Mackerras brought out this out well. It was rounded off with a thrilling finale, superbly judged and played.

There was also an unusual number of movements in the Linz which closed the concert, in the programme at any rate (where the opening Adagio-Allegro was split in two). Fortunately, on the stage we got a tour de force. The quality of the playing was stunning, from the opening movement through to the thrilling finale. To say I can't wait for these recordings would be putting it mildly. Still, with a summer studio date I suspect we'll be luck to hear them before Christmas. The power, sparkle and agility of the orchestra was quite something to have heard.

Throughout the evening, one was reminded just what incredible energy Mackerras possesses, particular given he was a couple weeks away from his eighty-third birthday.


Having got through the recording, Pizarro turned up in the Queen's Hall on the Sunday of the following week for a chamber concert. In the first half, the pianist was alone for book one of Debussy's preludes. Never the greatest fan of the composer, I found it rather dull and lost track of the movements, but it felt like rather more than twelve.

After the interval came Schubert's piano quintet in A major, The Trout. Despite being joined by some of the orchestra's finest musicians (violinist Christopher George, violist Jane Atkins, bassist Nicholas Bayley and the great David Watkin on cello) it didn't seem to catch fire and felt a little leaderless. I don't think it was helped by the piano being positioned rather far back. The reading also erred too much on the fast side for my tastes.

I realise only two days ago I had a rant about how great the chamber concerts were, and in general they are (this would seem to be the exception that proves the rule).


I await the new CD with interest and a review of that will follow here... though it's probably best if I don't make any promise as to when that might be!
Posted by Tam Pollard at 21:35