I may have complained before, about how early orchestras are announcing their seasons for next year. It's true that 31st March isn't quite so bad, but in my view late April or May is the sensible time for this sort of thing (i.e. as the previous season is ending).

Still, I'm clearly alone in this view and we seem to be in a new season frenzy with both ENO and the RSNO announcing this week. As the home team, we'll take the Royal Scottish National Orchestra first. First and foremost, it marks a return to their regular Friday night slot at the Usher Hall for their Edinburgh concerts. At least, I hope so. Walking past the user hall yesterday, I'm not quite so convinced: 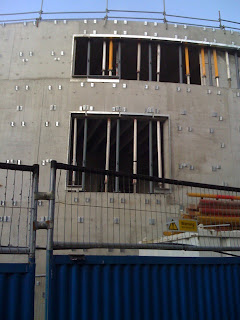 The season opener features pianist Lars Vogt and an interesting programme including Mozart's 24th concerto and some Knussen pieces on 2nd October. Later on, Deneve also gives us Dvorak's seventh and The Firebird. He's joined by Renaud Capucon for Tchaikovsky's violin concert on 11th December (as well as for Sibelius's second symphony).

Perhaps as a way of apologising for all the problems we've suffered in Edinburgh over the last two years with the closure of the hall, we do get one real treat on 15th January: Faure's requiem (with Lisa Milne and Christopher Maltman in the only Scottish performance they're giving).

In addition to Deneve, there are some interesting guest conductors: on 22nd January Andrew Davis is in town with John Lill, for a programme including Shostakovich's second concerto and Schumann's Rhenish; then on 19th February, Neeme Jarvi conducts Wagner arranged by de Vlieger and Sibelius.

It's not all perfect, though. Sadly, brilliant violinist Rachel Barton Pine is not returning this season. Instead, we do get Nicola Benedetti, though it's a shame she's doing exactly the same concerto as Barton Pine did last year. Roger Norrington, from whom one cannot seem to escape just now, turns up for some Beethoven and Schumann at the start of December; I'll pass. Deneve is giving us Mahler six next March, sadly, after Mahler five this year, I think I'll give that a miss too. I could also have done without the rather bling nature of the gold brochure.

But things come right again at the Season close: first with Britten's War Requiem at the end of April (even if it does feature Ian Bostridge) and then the finale on 14th May, which brings Truls Mork for Elgar's cello and Janacek's Taras Bulba.


Over at ENO, things are really rather interesting. Not least because, unlike orchestras, for some reason they don't provide a nice handy PDF to download. Come, this isn't difficult! Okay, so we can download the first half (but it's 35MB). Still, let's not gripe.

The season opener is Ligeti's Le Grand Macabre. I don't know the work at all, but have enjoyed everything I've heard from the composer, so this is probably a must (Gardner conducts). Later on we get Britten's Turn of the Screw, marking the first appearance of Charles Mackerras at the house since he conducted a superb (music-wise, the production was dire) Vec Makropulos a few years back; David McVicar directs.

In November, Gardner gives us a double bill of Bluebeard's Castle and The Rite of Spring. In an interesting move, the year closes with a staging of Handel's Messiah.

According to Charlotte Higgins writing in the Guardian, the 2010 part of the season is also interesting: there's Hans Werner Henze's Elegy for Young Lovers and, after his success with Jenufa, David Alden produces Kata Kabanova. In a brave move, the season closes with a new work, details of which are not available at present.

In short, I'm very impressed: a nice mix of adventurous programming and crowd pleasers such as Turandot or Rigoletto.
Posted by Tam Pollard at 13:10