The Scottish Chamber Orchestra were due to have closed their 2008/9 Edinburgh season this coming Thursday with a performance of Haydn's The Seasons. The latest round of delays to the Usher Hall renovations put paid to that notion (though the concert will still take place at City Halls in Glasgow). Still, it was no great loss to me as I had not planned to attend: Olari Elts' conducting does little for me.

Heading to the Queen's Hall tonight, I wondered if this would prove an underwhelming performance after Zacharias's effort a little over a week ago. Certainly, conductor Baldur Bronnimann put himself in difficult territory, an area where many recent guest conductors have marooned themselves: music Charles Mackerras has successfully conducted with the orchestra. As the advert in the programme reminded us, which unfortunately mis-capitalised the K, he has recorded both Kodaly's Dances of Galanta and Bartok's Music for Strings, Percussion and Celeste for Linn Records. 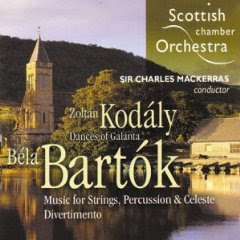 The programme began with Kodaly's Dances of Galanta, not a piece I know especially well. The SCO were on top form from the opening bars, played superbly by the cellos. Maximiliano Martin's clarinet solos were as outstanding as we have come to expect from him. Guest (I assume) principal horn Bostjan Lipovsek was too loud for my taste on his first entry, something that was generally true of Bronnimann's reading of the piece (volume can too easily be an issue when a full orchestra plays in the Queen's Hall). However, overall it was very tightly played, with the faster sections particularly impressive. 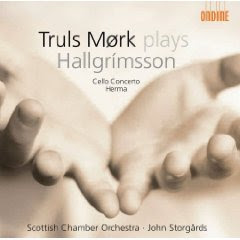 Then came, for me, the feature event: the world premiere of Hallgrimsson's double bass concerto Sonnambulo. Last year we were treated to Truls Mork playing the cello concerto (which was rather special, and which they have just released a recording of). In many ways it was similar, also having a wonderful flow to it. The orchestra's principal bass, Nicholas Bayley, was the soloist, and had a lovely range and colour to his playing. This was particularly true at the start where he blended beautifully with the cymbal. Elsewhere pianist Peter Evans deftly moved between the piano and celeste (and doubtless explaining the shrewdness of coupling it with the Bartok). The work featured a fairly scaled back orchestra (for example, only one horn and trumpet, two cellos). As was the case last year, I find myself wanting to hear it again right away and get to know it better. There seemed to be cameras present to record it, and I can only hope we don't have to wait too long for a CD release.

After the interval was Bartok's Music for Strings, Percussion and Celeste. Again, not a work I know well. I hadn't, for example, realised it is really scored for two separate string orchestras, divided one on each side of the stage, piano and celeste in the centre. The orchestra played superbly - some wonderful pizzicato work, especially from principal cellist David Watkin, who surely has the most enthusiastic technique around; similarly there was some nice spiccato bowing. The space seemed slightly limiting - ideally I would have thought the percussion and timpani would be arranged along the back of the stage, rather than off to one side under the gallery; the extra instruments were well played though. Julia Lynch took over the celeste (and at one point joined Evans at the piano).

Oddly, there wasn't the ghost of excess volume in the second two works. All told, it represented some of the finest playing the orchestra has managed all season and, as such, a more than fitting finale. For one of the Adventurer concerts, and a programme of 20th and 21st century music, it was surprisingly well sold, and justly well received. The SCO seemed to have liked working with Bronnimann and were particularly reluctant to get to their feet at the end.
Posted by Tam Pollard at 20:27