It's very exciting right now: we're so nearly there. Almost every time I've seen my youngest uncle in the last decade or so I've had one question for him: when is he going to get back into the recording studio and produce a new album. (The fact that Dolby is my uncle earns this post a shameless plugs tag.)

It's been the better part of two decades since Astronauts and Heretics, his last effort, but in recent years things have started to look up, first with the Sole Inhabitant tour and then more recently when he established his lifeboat studio in his back garden. 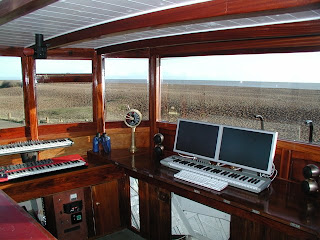 Now everything seems to be happening at once. Shortly we will get brand new remasters of his first two albums The Golden Age of Wireless and The Flat Earth, with extra tracks, and, in the case of the former a bonus DVD (you may wish to register at his online forum as some of the extras will only be made available via this). EMI's pop department appears to be not much more reliable than their classical though, and the release dates have kept slipping. Still, while we wait, we have a couple of things to tide us over. First up is this, The Singular Thomas Dolby: 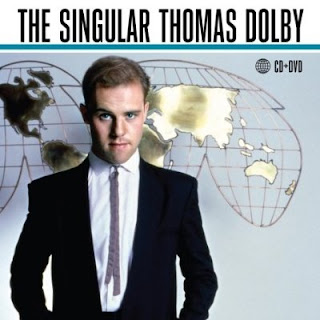 Released on Monday, by Friday Amazon had still to ship it (clearly they are unable to count up all the people who have ordered it and get that many copies), so I picked it up in Fopp instead; pleasantly reassuring that you can pick up a Dolby disc on the high street. Essentially, it's Retrospectacle redux (i.e. a compilation disc). Now, I'm not ordinarily a great fan of these, but two things make it well worth buying.

First up is the second disc which is a DVD containing a series of Dolby's music videos. Some of these, such as She Blinded me with Science and Hyperactive I've seen before (the latter I remember from my childhood and a worn VHS tape). Many I have not, so it is a real treasure trove. May the Cube Be With You is nicely zany and I think Airhead is extremely clever. The retro filming of I Love You, Goodbye fits wonderfully. It also scores points with me right off by having a simple and clean menu design. As with the CD, the sound has been remastered and sound very good indeed. The picture is decent enough too (but it is very likely they didn't have source material in such good condition to work with). That it is only stereo will annoy some. It's fine with me, I no longer bother to run a 5.1 system and find it utterly pointless for music - when in a concert hall are the musicians ever behind you (I can count the instances on the fingers of one hand)? The DVD is PAL format (and does not appear to have regional coding); I don't know if this has implications for American players, but I've never had the slightest trouble with NTSC discs.

Secondly, the CD tracks have been digitally remastered. Sound quality is definitely improved and if not quite a night and day difference (the source previous versions were, after all, pretty decent to begin with), certainly cleaner, crisper and richer; the sound is much more open and less compressed. They have not been comprehensively remixed in the manner of, say, The Sole Inhabitant (where may of the textures are often totally new or changed). For those of a hi-fi persuasion this will make it worth acquiring. If you're not bothered by such things, you may not notice.

It should be noted that these are not the album versions, mostly shorter; it seems instrumental sections have been truncated as the lyrics seem all there. At least, more or less. Unfortunately, the lyric of silk Pyjamas has been changed from "how's the bugger gonna manage" to "how's she ever gonna manage". A pity. A good thing EMI don't have to remasted Phillp Jeays' lyric "Until one day you find your freedom fucked with freedom fries", from his supreme rant against consumerism and the Iraq war Seven Signs of Ageing.

One nice curiosity is Fieldwork (which has never, as far as I am aware, had a CD release). Depending on your view, the disc may be worth buying for the CD; but for my money, what makes it cheap at twice the price is the DVD, the CD is a nice bonus. It does, however, make me all the more eager for the two album remasters.


Much more interesting, and tantalising, though, is the current edition of the Wired podcast (issue five, if you're reading this in the future), which features Dolby as guest DJ. Amid a relatively interesting selection of other pieces (Iggy Pop surprised me for some reason), we get three tantalising glimpses at, yes, you guessed, that elusive work in progress, the new album. Or, as we now know we can call it A Map of the Floating City. This seems to have arisen from the fact that JJ Abrams recently guest edited an issue, and turns out to be a fan of Dolby (listing The Golden Age of Wireless among his favourite albums; while we part company somewhat, in that Wireless isn't my favourite, praise doesn't come much more fulsome than this):

Dolby's The Golden Age of Wireless remains one of the greatest albums ever recorded. And his follow-up records were a brilliant mix of heart, soul, and electronics..... He's a genius.

I feel a bit bad even trying to review them. I must confess to not having been blown away on the first listen, but having gone back several times in writing this, I'm now much more excited. However, part of that is, in general, I think Dolby's albums are well filled with songs that belong together, so it may not necessarily be possible to make a fair judgement in isolation (the A side of The Flat Earth remains one of my favourite album sides of all time - the only thing blemish on the album is that, superb though it is, I don't quite feel Hyperactive fits there).

The first new track arrives at a cue point 9.32 into the podcast, 9.09 if you want the spoken introduction. It's called The Toad Lickers, a tale of eco-warriors holed up in the mountains of Wales and it has a folksy feel to it, aided by the presence of accordion and dobro. There's a gently subversive wit to many of the lyrics, as we might expect. I like especially like "make hay not war".

The second new track arrives at 16.17 (16.01 if you want the spoken introduction) and is called Oceanea. This is classic Dolby, dreamy and melodic in the manner of, say, Screen Kiss or Mulu The Rain Forest (especially the pipes). I can't wait to hear this one at CD quality rather than on a podcast.

Well, I'll be releasing my upcoming album in the form of three downloadable EPs, followed by a physical CD entitled A Map of the Floating City.

First up, nice title. There certainly seems to be a fairly nautical inspiration. Of course, from a studio in a converted boat, looking out on the North Sea and a windswept Suffolk beach, this is not surprising. However, the statement begs numerous questions:

If Dolby or anyone representing him wants to answer some or any of these questions, we'll happily print the responses.

Dolby closes out the podcast with a snippet from a third and final new song: To the Lifeboats, so brief I won't give any comment beyond a plea to hear it in full.
Posted by Tam Pollard at 13:31