It's funny the way things work out. I started this musical holiday with one Emperor concerto and have managed to end it with another, and one that was superb in different ways. Interestingly, and quite correctly, Aimard had chosen, somewhat unconventionally, to end with the concerto and start a symphony.

That symphony was the last bit of the festival's celebration of Haydn. So, naturally, Aimard had chosen the 45th, or the Farewell, if you prefer. A little different from some of his other compositions, perhaps, sadder in tone as opposed to the boundless joy which infects so many of his works. Aimard conducted a tightly controlled, if somewhat solemn reading, marked by superb playing from the Mahler Chamber Orchestra. Until the end. Of the four Haydn symphonies I've heard here, three have featured prominent musical jokes (90 had a false end and 60 played with tuning), this was perhaps the most dramatically executed. Throughout the finale the instruments drop out one by one until just two violins are left, climbing softly into the upper registers. With theatrical flourish, as each player finished they got up, took their instrument, walked away and leant against the baffle at the back of the stage. With just six strings remaining, Aimard himself ceased conducting and joined them. It was a lovely touch (which sadly won't come across on the broadcast, save perhaps those with the louder shoes). Afterwards they lined up along the front of the stage for well deserved applause. 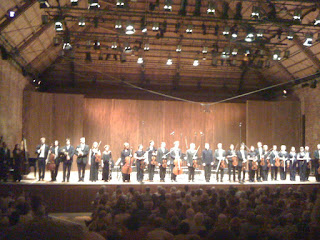 This was followed by Stockhausen, and once more Aimard gave one of his fine talks, illustrated with examples from the players. At the start I had wondered why, in contrast to Thursday's programme, the Haydn was placed before the modern work rather than after. It turned out that the Stockhausen linked not only to the Haydn, in terms of it too having its players drop out one by one, but also to the Emperor. Kontra-Punkte featured a small force comprised of, from left to right, harp, cello, violin, trombone, trumpet, piano (interestingly not Aimard, who conducted, but Florian Muller), bassoon, bass clarinet, clarinet and flute. Throughout the piece, not only does a melody pass between the instruments, but each has a series of mini cadenzas which, he explained, link it with the Emperor, which itself never has a proper full cadenza but only a series of small ones. Stockhausen uses this to play with polyphony, before whittling his forces down to piano alone. They played the piece superbly, and while one felt one or two minds might have wandered slightly during the talk, people seemed to listen all the more closely as a result. I certainly hope this is something he continues as it has made the modern pieces he has done much more rewarding. True, some can be conveyed in a programme not, but an illustrated talk is clear in a way words alone are often obtuse.


They had, however, saved the best for last. You might think that, in a season where I've managed to schedule four performances of the Emperor, I would be mightily sick of it by now. But, for whatever reason, I'm not. Perhaps because they seem to have got progressively better each time. We began in October with Trpceski and the SCO, then in April came Vogt and the Philharmonia. A mere eleven days ago it was the turn of Paul Lewis and the LSO. Now, I will confess that I had expected this to fall a little short after Lewis, but it didn't, not at all. Of course, Aimard has a decent Beethoven pedigree in his series of recordings with Harnoncourt and the Chamber Orchestra of Europe, which don't exhibit the conductor's annoying habit of pulling a score about (and which puts me off many of his recordings).

Aimard directed from the Keyboard (interestingly using a different piano to the one used for the Stockhausen, leading me to wonder if some slightly different tuning had been used or whether, perhaps, he was using his own piano). Now, this is something I tend not to like. Too often it leads either to wrong notes at the piano, as too much focus is lost to direction, or less tight orchestral playing (certainly, of the three cycles of Mozart concerti I have heard featuring the English Chamber Orchestra, I find the only one with a conductor has the best orchestral playing). It doubtless helps when you have an ensemble as fine as the Mahler Chamber Orchestra. Certainly their playing was little short of exceptional. However, this did not come at much cost to Aimard (though there were one or two wrong notes they were few and far between). What it did mean, however, was that there was not the slightest gulf in interpretation between conductor and soloist, as too often happens; Davis and Lewis had a touch of this problem.

Furthermore, Aimard's description of the work in terms of a series of brief cadenzas helped me see the piece afresh, and had me listening anew for things that haven't jumped out at me in the past, such as piano and drum cadenza at the end (heightened by the use of natural timpani). Similarly, he toyed with the slow lead into the finale brilliantly, slowing down more than usual, so that when he thundered in with the opening notes it made you start, despite the fact you knew they were coming and were waiting.

Of course, I do still find Lewis's pianism slightly more too my taste, he has a slightly greater delicacy to his playing and gets his power in a way that I prefer, which is somehow less percussive. Lewis also made so many of the cadenza parts feel fresh in different ways. But, for the sheer unity of vision, this probably pips that to the post as a better performance.

A large part of that was down to the exceptional and wonderfully rich playing of the orchestra. It's usually a mark a greatness when it's difficult to single out any one section, so uniformly high was the standard or the playing: at one moment the strings were talking your breath away, at another it might be the winds (especially flautist Chiara Tonellis, probably, the orchestra list in the programme is not 100% accurate, I know for a fact that Ursula Leveaux, the fine former principal bassoon of the Scottish Chamber Orchestra, was subbing in but isn't listed; someone on the SCO's blog tipped me off on Thursday, and knowing what I was looking for, recognised her easily last night). I gather the orchestra recently recorded Fidelio with Abbado, probably one to add to the purchase list. Actually, one thing I was thinking a lot during the performance was that someone should lock Daniel Harding in the Maltings along with the MCO and not let them out until they've recorded all nine of the Beethoven's symphonies. After all, the first time I came across Harding it was in this very hall, with a blinding reading of the seventh.

It was a stunning note to end on, and makes me slightly glad I didn't elect to stay for tonight's Bach, since I can't see it topping this. It also leaves me most impressed with Aimard as a director and looking forward to seeing what he will put on for us next year.

For the benefit of those unable to attend, and those of us who'd be very happy to listen again, Radio 3 will be broadcasting it on Monday.