Paul Lewis, Colin Davis and the LSO in A Game of Two Halves (with Beethoven and Brahms)

When I was booking my 2008/9 season, Paul Lewis playing Beethoven's Emperor concerto always looked set to be a highlight. I first heard him back in 2006 playing Beethoven sonatas at the Queen's Hall; the mix of delicacy and weight, yet without recourse to aggressive thumping, endeared him to me. The rest of his sonata cycle was similarly impressive (as this review of the final concert indicates). He has since impressed in Beethoven and Mozart concerti this season.

What impressed me that first time was how compelling and engaging he made the Hammerklavier, not a work I had cared much for previously. Ever since he finished the cycle it has occurred to me that he might do a very good Emperor: he might have the grandeur to rival Solomon's superb account (available on Testament). Colin Davis seemed an idea partner too. I am a big fan of his symphony cycle with the Dresden Staatskapelle, slow but full of beautiful textures and wonderfully fresh as a result. Full too of grandeur.

This sort of situation can make for a problem, since the higher the expectations the greater the chance of disappointment. Fortunately, Lewis did not disappoint. His ability to contrast the most exquisite delicacy in the best traditions of Wilhelm Kempff with raw Beethovian power and weight was on display to great effect in the outer movements, so too was the clarity of his playing. The slow movement was sublimely beautiful. In general, everything one has come to expect from his work with Beethoven. However, there was more than that. With a work like the fifth concerto, which is played so much (overplayed, some might argue, this is the third I've attended so far this season!), it might easily become routine. Not in Lewis's hands, time and again he made the work feel fresh and new, especially in some of the quieter passages, bringing out things I could swear I hadn't noticed before.

The orchestra provided excellent accompaniment. As ever, the Barbican acoustic robbing them of some of the richness of texture that make Davis's Dresden recordings so special. Davis himself seemed a touch lacking in fire at one or two moments, but he was none the less a sensitive accompanist. Oh, and they held the tension nicely in the lead into the finale (always something of a key moment for me). It was justly very well received. Of the three I've heard this season it was comfortably the finest, not even the digital watch alarm in slow movement could spoil it.


Things were a little different after the interval as Davis and the LSO returned for Brahms third symphony. Now, I must confess to having had some doubts about this. I recently picked up his cycle of the symphonies (made with the Bavarian Radio Symphony Orchestra) at budget price. Unfortunately I found them rather dull and they will soon be finding their way to an Edinburgh charity shop. The London Symphony Orchestra hasn't had the best luck with Brahms in recent years either - their recorded cycle with Haitink is also a little dull (save for a fine second and double concerto) and not one of the highlights of the generally excellent LSO Live discography.

However, as they played the opening bars, I thought we were in for treat: full of energy and drama. Then some odd things happened. There seemed to be some quite extreme variations in tempo, too much rubato perhaps, which seemed to suck out the energy and drama he'd built up, rather like the air escaping from a balloon. The pattern recurred throughout the movement. During two slow middle movements, the air never seemed to get into the balloon in the first place and it was just a little dull. The finale got off to a good start, but again suffered from the same problems as the first movement. The quiet closing chords underwhelmed as a result.

The playing of the orchestra was exemplary throughout. None the less, I don't think I was alone in my disappointment at the second half, and the applause was decidedly more polite than it had been for the Beethoven. That said, there were some in the audience who'd clearly enjoyed it greatly, so Davis's Brahms is obviously for some.

Nonetheless, the Beethoven alone justified the price of admission. Lewis has been recording the concertos with the BBC Symphony Orchestra and Belohavek. They should be something pretty special. So too his future plans to tape the Diabelli Variations (dare I hope he tours that first, with luck even to the Queen's Hall again).

Tomorrow I'm off to Suffolk for a week and a half at the Aldeburgh festival, so stay tuned for reports of the musical goings on there. (Carelessly, I believe I've managed to book my fourth Emperor of the season! Still, as a composer friend of mine would argue, you can never have too much of that.)

Oh, one final thing, what on earth is this thing, sitting on the terrace outside the Barbican (answers on a postcard): 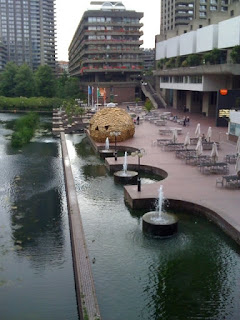 Very much concur with your review of last night's concert. I thought Lewis was particularly fine in the delicate passages, and the transition into the finale of the Beethoven was exquisite.

Also many thanks for your comment on my fledgling blog. Hope you have a superb time in Aldeburgh!