I'm huge fan of Don Carlos, for me it ranks among the very greatest operas: there is superb music, a moving plot and some stunning political drama (there can be few finer scenes on stage than the confrontation between the King and the Grand Inquisitor). I love the Opera In English series too, since it means I can enjoy works without having to read along with the libretto. Indeed, often I find it's their translated versions that stick in my head, I'm always a little disappointed when surtitles don't read "That [illegitimate child] Figaro, I'll make him pay". You might think, therefore, that Chandos's latest issue would therefore be an unqualified recommendation. I wish that it was, but sadly it's not quite that simple. 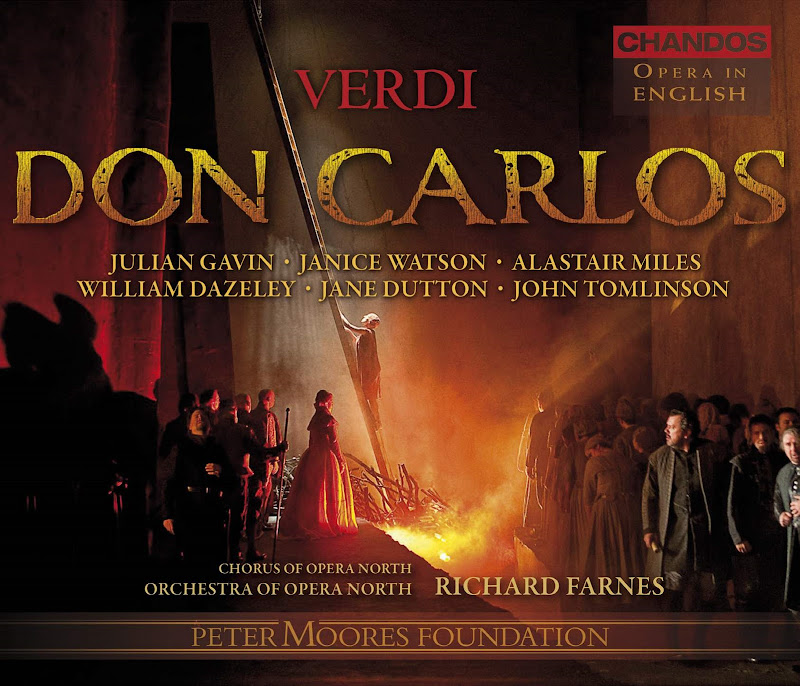 The first problem jumps out and smacks you in the face immediately: they have forgotten to record Act I and we're straight in at Act II. Okay, I realise I'm being rather unfair: they've picked the 1883 version which only has four acts, but the fact of the matter is that however you colour it this is a mistake. Mike Ashman may argue in his liner note that it's "the only version of the work which [Verdi] himself supervised completely in person", but that doesn't mean it stands up dramatically. Act I crucially sets the scene, it is where we see Carlos and Elizabeth meet and fall in love, for goodness sake, not to mention learning what's come between them; losing it cripples the Opera. Now, I can see why you might be tempted to do so in a touring production (and this recording is based on Opera North's recent tour), after all, dropping a scene saves you both sets and doubtless overtime. However, surely the time could have been found to add it back in for the recording. It is, in my personal view, difficult to understate how debilitating a flaw this choice is. It's a tremendous pity since in other respects the set has a lot going for it.

(Note - for this review I'm going to use the Act numbering as per the five Act version, since to me that makes more sense. Just subtract one to get the numbers used in the set.)

The next, much more positive, and also strikingly obvious thing is just how fine the orchestral playing on show here is. Would, frankly, that Opera North made regular trips to Edinburgh if this is their standard. Richard Farnes draws a wonderfully rich sound from the his forces. Pacing is on the slow side but he never loses momentum. Often the set feels close to a real drama, not simply a studio recording, for example in the Auto de Fe scene. But at the same time it isn't quite there: the mob in Act IV doesn't have quite the terrifying power it can (and while John Tomlinson, as the Inquisitor, does have the booming power to quell them, he is not so chilling as, say, Halfvarson). However, moments where the drama feels lacking, such as the Act III confrontation between Carlos, Eboli and Rodrigo, are few and far between.

The singing, though pretty good, is not quite in the same league as the playing. Of course, as someone once said to me, Don Carlos is easy so long as you have the six best singers in the world. There is some truth this, and to some extent my criticisms fall into hair-splitting territory; I am holding the cast up against some of the greatest singers and performers in the world who have delivered revelatory readings, and that's a very hard yardstick. Certainly there are no glaring weak links or painful moments (more than can be said of Abbado's French set where nobody seemed to have bothered with a language coach).

Julian Gavin, in the title role, has a nice and sweet voice, but diction could do to be sharper. Alastair Miles gives an underpowered performance as his father (Philip II); indeed, in some respects I'd rather have had John Tomlinson here than as the Inquisitor. In Act III, for example, Miles doesn't seem sufficiently shocked or injured by Carlos's treason and his rewarding of Rodrigo for saving him seems almost matter of fact. Similarly, in Act IV I want more age, gravitas and despair as he sleeps alone in the Escurial. As I felt when he sang the role at Covent Garden, Tomlinson is too boomy for my taste - there can be something altogether subtler and more sinister to the character's power. There's never really any doubt where the power lies when the two clash, and at times it sounds like they might as well be in a pub debating the finer points of philosophy. It is only in the second part of the scene when the Inquisitor turns against Rodrigo that Tomlinson is truly menacing and only here does Miles find a nice desperation in his pleading. The pace is possibly on the fast side, a rare instance of Farnes not maximising the drama, and again Tomlinson's boom saps his departing "Maybe" of some of its potential power.

Rodrigo (William Dazeley) may not challenge Simon Keenlyside in the acting stakes, but he turns in a solid and cleanly voiced performance and finds a glorious weight in the climax of the blood brotherhood duet (which is wonderfully offset by the superb choral singing of the monks, or rather the Opera North chorus) as well as giving a powerfully emotional reading of the death scene. However, elsewhere in the work he doesn't always have quite the nobility and gravity, this is especially true when he disarms Carlos in Act III (though one does keenly feel Carlos's pain at the betrayal).

Janice Watson is nice enough as Elisabeth, though she too feels a little light. However, at her best she is utterly captivating and her moving performance in Act V is one of the highlights of the set, underscored by Farnes' sensitive accompaniment. At other times this electricity is missing: when she cries for justice in Act IV it's a rather tame affair - there should be furious and righteous indignation.

Eboli is, in my view, one of the trickiest parts to cast in opera: you ideally want a very light and agile voice during the veil song (e.g. Fedora Barbieri on Giulini's live account, who is breathtakingly so), but then, on the other hand, you want a real emotional weight to O don fatale. Jane Dutton acquits herself pretty well. True, she doesn't match Barbieri in Act II, but neither does she feel hopelessly miscast here, as too often happens. She is good in Act IV, though O don fatale doesn't have the weight I would like - I want to be trembling and I'm not.

Rounding off the main cast, Clive Bayley as the monk (or voice of Carlos V) isn't quite booming or haunting enough in Act II, though this may be down to balance or an artistic decision since he is absolutely stunning Act V, adding to the searing drama of Farnes' reading in the final moments.

The voices are not helped by the balance, where they could have done to be a little more prominent; as it is, it's hard to find a volume where they are clear but which doesn't have the neighbours applying for an ASBO during the heavier orchestral climaxes. There are also one or two slightly odd moments where there are some very extremely balanced sounds - this can be especially disconcerting on headphones and is probably not the best way to get off-stage or etherial effects on a recording (the off-stage brass in the Auto de Fe scene is a striking example).

Throughout, the chorus under Timothy Burke are excellent. I particularly appreciate having their words in English during the veil song.

And what of the English translation? Italian opera in English can sometimes come off a little like Gilbert and Sullivan, and not in a good way. For the most part, this is avoided, save where the queen demands justice in Act IV. As always, I feel the pros of hearing it in my native tongue outweigh the cons.

Again and again, especially in the larger climaxes, a fabulous orchestral sound does much to erase any doubts - I hadn't realised how fine a band Opera North have. There is the wonderful menace to the music that introduces the Grand Inquisitor and then that gloriously moving string sound, almost shimmering, at the start of the prison scene. It makes me wish Farnes had been in the pit for Royal Opera's recent revival, certainly he's now high on my list of conductors to hear doing Verdi live (or anything else, for that matter).

If you don't own a recording of Don Carlos and are looking for one, I can't really recommend this as the best starting point. Instead I would point you towards Giulini (either live, though the mono sound is not ideal, there are some unfortunate, though less severe, cuts and the Covent Garden audience is quite noisy, or in the studio) or Pappano in French (especially worth having for Halfvarson's Inquisitor), both have good playing, are complete enough and have strong conductors. If you want really completely you need Matheson on Opera Rara, but that set has other flaws and is probably for completists only. Sad to say, the perfect Don Carlos has not yet been recorded. However, if like me you have several Don Carloses and are always happy to pick up another, then this is worth having. It's nice to have it in English, and you owe it to yourself to hear Farnes' reading of the score. It's also very reasonably priced. Cuts and hair-splitting aside, it is a satisfying listen and I defy you to find a conductor who injects more passion into the final minutes. In the field of Don Carlos recordings you can do very much worse. I won't be digging it out every week, but it and my CD player certainly won't be strangers either.
Posted by Tam Pollard at 18:39