I know I retired Ears Today, my short-lived daily roundup of what I've been listening to, a few months back, however I listened to such a fine crop of discs on boxing day that an encore seemed in order.

I began with this: 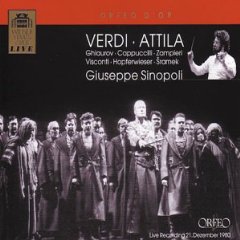 I've been exploring Sinopoli's Verdi recordings recently, and while I don't know Attila at all, I found this live recording from 1980 to be amongst the most impressive of the bunch. Yes, it being live (in Vienna) the applause can sometimes be a little intrusive, but there is such an energy and drama to Sinopoli's reading that such flaws are easily forgiven. The cast seem pretty solid too.

Verdi was followed by Haydn: 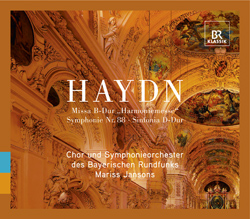 I'm a big fan of Jansons and the Baravian Radio Symphony Orchestra as a team and so the news that they've launched their own label is very exciting (they did previously issue some releases on Sony but these weren't always available in the UK). This first disc includes wonderfully played and joyful readings of Haydn's 88th Symphony and his Harmoniemesse. It's also available as a DVD (other releases include a Bruckner seventh, which is very fine, and a Mahler seventh I haven't listened to yet).

I've had the most recent box of DG's Bernstein Collector's Edition on my shelf for some time now, but hadn't got round to giving it a spin: 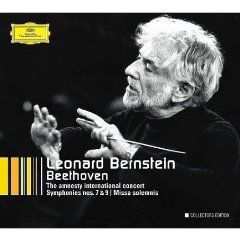 This is the second Beethoven release in the series and might be described as the odds and ends, but don't let that put you off. At the time of that first set (which was a cycle of the symphonies with the Vienna Philharmonic), I was slightly disappointed his Ode to Freedom performance of the ninth was not included. The reason is now apparent. However, it isn't that performance I listened to. Instead I gave something even rarer a spin. Bernstein's 1976 Amnesty International concert with the Bavarian Radio Symphony Orchestra has remained out of the catalogue for a bafflingly long period of time. One of the key reasons I bought the box, aside from being a Bernstein fan, was to get hold of it. Now that I have done, my puzzlement is only increased. The programme is all Beethoven and atmosphere is suitably electric, right from the opening bars of the Leonora III overture. This is followed by, in truth, a slightly weightier performance of the fourth concerto with Claudio Arrau than would ideally be my preference, but a very satisfying one nonetheless. On the second disc, however, the concert concludes with a reading of the fifth symphony that must rank amongst the most thrilling on record. This concert alone probably justifies acquiring the set.

It feels something of a shame, therefore, that this second disc is padded out with a reading of the seventh with the Boston Symphony Orchestra. It comes from August 1990 and the Tanglewood Festival, less than two months before the conductor's death, and lacks the energy that this exuberant work requires.

Annoyingly, none of the releases are on Spotify so I can provide no links.
Posted by Tam Pollard at 13:10