Last Saturday I was in HMV picking up a birthday present for someone. As I listened, the piped music was infuriatingly familiar, by which I mean that I recognised it but couldn't for the life of me place what it was or where I knew it from. A woman was singing and there was a piano. I could hear the refrain "I'm not the hero", but that was about it. Of course, a sensible person might, at this point, have asked the shop assistants what it was. Not me.

Instead, gifts bought, I went home and embarked on some intensive googling. Well, I say intensive, in point of fact I tracked the song down pretty swiftly: it turned out to be Hero by Regina Spektor and I knew it from the soundtrack to 500 Days of Summer (incidentally, I must at this point apologise to all those of you who aren't Spotify users and thus won't be able to access the links in this post - if anyone can point me out a similar US service on which I can set up links for those affected, let me know). Having listened to and enjoyed the song in full, I noticed that said soundtrack further benefitted from having an arguably even finer Spektor song in Us. This prompted me to put Spotify to good use and track down and listen to all the songs of hers that I could.

I was left with one overriding question: how on earth had it taken me so long to meet Spektor? Yesterday I tried to describe her to my brother: imagine, I suggested, a female Leonard Cohen, only with a prettier singing voice but not such a brilliant poet. I'm not sure that's a perfect description but I haven't come up with anything better. She also has no shortage of wit, has something endearingly quirky about her and comes across as extremely charismatic performer. Anyway, so much have I been listening to her this week that I felt a new segment was in order, that of Album of the Week. Actually, in choosing, I havered somewhat: Far is also a superb album, and in some ways an easier listen, but the strengths of the individual songs on Begin to Hope are such that it has to be the winner. I'm going to discuss a couple of these in an effort to explain just what I find so magical about Spektor. 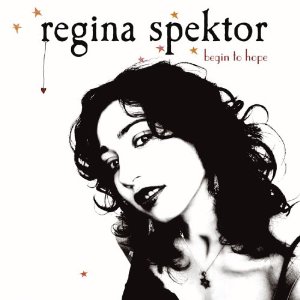 Starting at the beginning, there is Fidelity. Perhaps a little unusually it doesn't appear to feature her accompanying herself on the piano. What it does have is the most wonderful chorus in "It breaks my heart,", not so remarkable in its words, but rather in the way she stretches out "heart" as she repeats it - it's a vocal treat. It has plenty of that quirkiness I mentioned. Arguably even better in the live versions, it nonetheless marks a wonderful opening.

Then there is the predominantly voice and piano Sampson (there is some subtle string backing), hauntingly beautiful and wonderfully written, both musically and lyrically. As might be expected it's the story of the eponymous character and yet told with a humanising quality to Delilah and a tenderness that I've never associated with it before. It's one of the songs that brings Cohen to mind for me (I'm thinking of The Story of Isaac).

Apres moi is something a masterpiece. It mixes the same sort of vocal fireworks as were found in Fidelity, indeed, if anything more so. At the same time there is also a darkness to it, in no small part down to the heavier piano part. There is one of her many refrains that all too easily get stuck your head: "Apres moi le deluge, after me comes the flood".

Those are just three of my favourite tracks on this wonderful album, but there is much more, so much more. If you've never listened before I urge you to check it out; even if you know it, why not listen again, there are countless worse ways to spend an hour. It has been a wonderful discovery this week and it makes a worthy inaugural Album of the Week.

My plan is that this will become a regular feature, time permitting, to discuss an album that has especially caught my attention in a given week (or so, I may very well not get round to it quite that often). Hopefully, then, you'll be able to tune in soon for something completely different.

Email ThisBlogThis!Share to TwitterShare to FacebookShare to Pinterest
Labels: Album of the Week, Features, Tam

& as i've only just discovered your blog today, that also applies to me :)