At the end of last year I started one of those many blog posts that somehow never get finished.  The subject was the best discs of 2009, and while there were some very good ones (the Belcea Quartet's Schubert, for example), part of the reason it never got finished was that there just weren't all that many new discs last year which got me really excited.  How different 2010 has been.  We've been flooded with great releases: there have been three outstanding ones from Charles Mackerras alone, not to mention the LSO's new recording of Prokofiev's Romeo and Juliet and we're only half way through the year (so I won't yet count Paul Lewis's superb Beethoven concerti recordings since we have to wait until July for them).

As a result, when I say Peter Gregson's Terminal is one of the finest discs I've heard this year, it may not put it in quite the most exclusive group imaginable, but it's a testament to its outstanding quality. 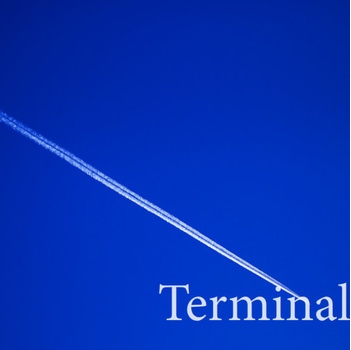 Some years ago I read a not very good book by Colin Forbes which was also called Terminal.  The two don't have much in common other than the fact that that opened with multiple definitions of the word and Gregson seems to have had multiple definitions in mind when picking his title.  As he writes, much of the music was conceived during long hours spent in airport terminals; at the same time, the first and last tracks are titled - and +, like the terminals on a battery.  Electricity is an apt theme, since this disc mixes cello with electric cello, both played one on top of the other and often subjected to delays or other electronic manipulation.  Gregson is keen to point out that this was done in complete takes, rather than adding a little bits here and there.  This has been a wise decision, as it ensures a more musical result.

What, then, do these less than forty minutes of music add up to?  Some people seem to get upset when an album only half fills a CD, but in my view no apology need be made for this since some of the best albums ever recorded are short: Ben Webster meets Oscar Peterson runs just under 37 minutes.  I'd rather have quality than space padded out with less good filler.  As with any great short album, it doesn't feel short anyway.  Perhaps it's the use of repeating motifs, such as in the first few minutes of Flight Path, but Terminal actually feels long;﻿ often it has an almost endless or eternal feel to it (perhaps a result of too many hours spent sat in airport terminals in the never ending wait for that flight to board).  This is as true in the epic Cello Counterpoint as in album's short opening track -﻿.  Indeed, in that way it calls to mind The Ascent of Man from Thomas Dolby's The Gate to the Mind's Eye (Dolby, of course, is a master of electronic music and overdubbing).  Well, I say repeating motifs, but the album never actually feels repetitive either.﻿﻿

At times it can be a little difficult to believe this was all achieved with a cello.  Or rather, two, one acoustic, another electric (and blue) which was custom built for Gregson.  Sometimes electric processing has been used, at other times there are effects from non-conventional cello techniques, such as tapping the body of the instrument.  However, as with all the best electronic or manipulated music, never do these processes get in the way of the music, never does one feel they're being used simply for the sake of it or because they can be.

In his notes Gregson talks about wanting to use the cello as a voice.  This is something particularly apparent in the opening track, -, where the main cello part soars above the backing track much like a singer's voice.

The album's Everest is probably Steve Reich's Cello Counterpoint.  Originally written for cello octet, on Terminal Gregson takes all eight parts, having played them in turn and stacked them one over the other.  In recording, the studio was laid out as if for a real octet with Gregson moving from one chair to the next (with headphones to hear what had already been laid down so that he could ensure the new part fit).  Now, overlaying one or two parts is doubtless tricky enough, eight played continuously through is seriously impressive - it really does feel like an octet and a pretty tight one at that.  Furthermore, if you didn't know it was a different composer, I'm not sure you would tell from the music, so consistent is the album's style (though it is true that Cello Counterpoint is by far the most ambitious piece, the most intense and probably the most technically complex to play).

Then there is the lyricism of Orb, a lullaby for four acoustic cellos, and the firework effects in Spin.  The latter was recorded on November 5th and if you listen carefully the influence can be clearly heard.  Again, this track uses a repeating rhythm, delayed and then played back over, and yet again without seeming repetitive.  Instead it provides a strong sense of momentum to the first half.

Airspace Rebooted from ItoWorld on Vimeo.

My favourite track, though, has to be Flight Path.  Gregson says that this was inspired by a board at LAX showing airplane arrivals and departures (the video above, related to the recent volcanic disruptions, should give an idea).  Opening with a rapid and repeating melody, augmented by some wonderful and doubtless processed textures, which you may have trouble believing are nothing but cello, it then morphs into a slow almost dreamlike section, the simple shifting chords giving a shimmering effect - almost as though the plane has lifted off and is now cruising high above the clouds.  Then, at the end, the opening theme returns once more.  In a similar way to Sibelius's 7th symphony, it gives a feeling of a great distance travelled, despite not lasting very long.

+ brings the album to a nice close.  On the one hand it shares its orchestration with Cello Counterpoint (which precedes it), though mixing acoustic and electric as well as adding effects.  It also starts on the same chord as that finished.  At the same time, with its slow melody it provides a fitting bookend with -, though it is brighter.

Terminal is an album that rewards both repeated listening and listening on decent kit.  The former as different textures emerge and one hears more each time, the latter because the high quality recording allows all that to be audible.  And while I haven't specifically mentioned it above, it's worth noting that throughout the album Gregson's playing is of an impressively high standard.﻿

Credit must be shared with Milton Mermikides, who co-composed and produced the album.  This is clearly a fruitful partnership from which we can expect great things.  Credit also to Bowers and Wilkins (manufacturer of superb Hi-Fi loudspeakers) and their Society of Sound project (a subscription based music download service which provides one high quality recording a month) who are responsible for commissioning Terminal.

I would say buy it now, but at the moment only two options exist: you can either subscribe the Society of Sound (whether or not that's worth it is really a topic for another post), or alternatively you can download the album on its own here in either 320 MP3 or FLAC formats.  My recommendation, assuming you've got the requisite kit, is to go for the 24-bit FLAC studio master quality which sounds simply glorious (though if you're an iTunes user be careful - getting FLAC to play is difficult and you'll probably need to convert it or use other software).  A physical CD release is promised, so it's possible you may want to wait for that.  Either way, though, you really really should hear this; it's stunningly good.  Oh, and if you're reading this in Edinburgh, Gregson is performing at the Queen's Hall tonight and the programme promises to be an audio-visual extravaganza, including versions of Terminal tracks retooled for live performance alongside Bach cello suites.  I'm absolutely gutted to be missing it.

Note - if you're a Mac user, getting your machine to output 24 bits to the digital output ﻿is fairly simple, if not even vaguely obvious.  Instead of being in the sound preference pane (where you might expect to find it), you'll need to go to Applications>Utilities>Audio Midi Setup. From there select "Built-in Output" from the list on the left.  Then on the right you'll find a drop down box that allows you to pick 16, 20 or 24 bit (and another for frequency - you'll need 48KHz for Terminal but I have mine set for 96 as many other studio master quality downloads use this).