It was a brave decision to end the opera programme of this year's festival with a new work from a composer who is not a household name, not least given the costs of importing an opera company all the way from Australia.  Yet, in Bliss, Jonathan Mills' gamble paid off and handsomely: it made for a fine and memorable night in the theatre. 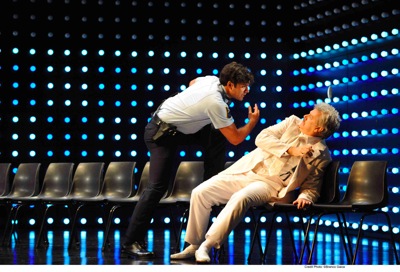 The production was instantly striking, with three sides of the stage enclosed by walls covered in lightbulbs (actually LEDs) of constantly shifting colours, in which various doors opened and closed seamlessly, allowing singers and set on and off.  In stark contrast to the derivative and often intrusive use of video projection in Porgy and Bess, these were employed to inspired effect: some windows here made a house, the green line of the ECG machine reminded us of Joy's fragile health and transported us to the hospital and the flames of hell licked up from below (they even illustrated the elephant in the room - of which more anon).  This was coupled with a simple revolving stage that reinforced the fluid changes in and out of scene; nowhere was this more so than in the second act which alternated between a hotel room, with a bridge visible outside, and the family home.  All credit then to the production team of director Neil Armfield, set designer Brian Thomson (also responsible for those magical lights) and choreographer Kate Champion: together they have produced a production that is clever, inventive and doesn't get in the way as so many do, rather it effectively serves the text.

The plot is, in most respects, a fairly familiar one (though there are things I didn't see coming).  Harry Joy (a strong and powerful performance by Peter Coleman-Wright, in a large and demanding role), an advertising executive who has enjoyed great success untroubled by such things as principles, suffers a heart attack and has near death experience.  The following two hours chronicle his struggle to come to terms with the world and his place in it, uncovering his rather hollow life and wrestling with questions of good and evil.

Amanda Holden's text, after Peter Carey's novel, is good, has a nice dry wit running through it, and is at times laugh out loud funny: "A fucking elephant sat on my fucking car." he desperately attempts to explain to the police who've arrested him for drunken driving.  Brett Dean's score serves it well, firmly reinforcing the emotion, whether it be the tender love moments between Harry and Honey (an often beguiling Lorina Gore), the madness of the lunatic asylum, the relentless capitalism of the board meeting or the fire of the dies irae.  Conductor Elgar Howarth kept a firm grip on his forces and ensured the singers were well balanced.

There are some moments of real power, such as when Joy's friend Alex (Barry Ryan) is carted off to a lunatic asylum, mistaken for Joy, his protestations only reinforcing the diagnosis of madness, then later as he compromises his newfound principles to escape the same fate.  There are some other very fine performance, Shane Lowrencev particularly stands out, first with a fine comic turn as the Reverend Des and later as one of the police officers and as asylum inmate 'nurse'.  Merlyn Quaife, playing his wife Betty, does a nice line in mercenary and dislikable, or an "ambitious bitch" as the script puts it.  The only obviously weak link was Taryn Fiebig as his daughter, who seemed to lack power (though not stage presence).

Interestingly, and in stark contrast to Porgy and Bess, they gave us surtitles.  However, and similarly in contrast, such was the diction of the singers and the balance of the forces that while they were nice to have, they were often unnecessary, so clear were most of the words.  So too, interestingly, the binoculars I'd brought.  Back in row G of the upper circular, it worked wonderfully well without and I rarely felt the need to raise them to my eyes.

Goodness knows how much it cost to bring over: the cast isn't small, and while in some respects the sets were simple, they cannot have been that cheap (either shipped or constructed afresh here): the massive sandbox wheeled on at the climax is a case in point.  They were doubtless helped by the decision to use the BBC Symphony Orchestra rather than importing Opera Australia's own.  Their playing was superb throughout the evening, their pedigree in new music doubtless an asset; their achievement the more remarkable given their intense schedule with the Proms on just now, which hardly leads one to believe they have time to pop up to Edinburgh and deliver a knockout performance of more than two hours of new opera.

Saturday's closing concert of Mahler 8 is now long since sold out.  If you're short of a ticket, Bliss is to be thoroughly recommended as an alternative.  Indeed, Runnicles has a job on his hands in topping it and for me it is one of the highlights of this year's festival.

Having said that, it wasn't to all tastes.  My brother disagrees with me profoundly on the quality of the score, on how well it served the text, was not engaged by the story nor moved by the characters.  Still, whichever way you come down, I would suggest it's still well worth seeing.