Here's Runnicles with Mahler 8 and the EIF 2010 closing concert (or, list of lifelong dreams you are now one shorter)

I first heard Mahler's epic 8th symphony eight or nine years ago, via a recording by Giuseppe Sinopoli and the Philharmonia Orchestra.  It, along with a recording of the 5th, was my first serious exploration of the composer.  From the opening bars, the massive forces, the low rumbling organ, the cry of "veni, creator spirtus" through the next ninety minutes or so, I had never heard anything like it.  I've dearly wanted to hear it live ever since.  At the closing concert of this year's Edinburgh festival, in the hands of Donald Runnicles, the BBC Scottish Symphony Orchestra, the massed voices of the Edinburgh Festival Chorus (supplemented by singers from the RSNO chorus and the SCO chorus), the RSNO junior chorus and an impressive line-up of soloists, the result was more powerful than I could have imagined.  Indeed, it is the kind of event for which the word awesome was surely invented. 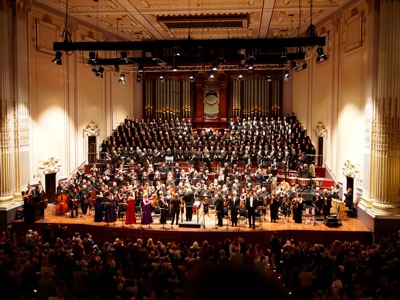 That opening movement, done right, should feel like you've been hit by a train (in a good way, if that's not a contradiction in terms).  In Runnicles' hands it seemed to happen repeatedly, and several of them appeared to have been carrying a cargo of nuclear explosives.  He deployed his innate theatricality to thrilling effect as, at the close, brass reinforcements appeared at three most central dress circle doors giving the kind of effect that sets the heart racing, the legs shaking, the mouth open and gaping, and is impossible to recreate on a CD.  I'm not sure I could have got to my feet if I'd wanted to - I have no idea how the performers carried on for another hour.

Then comes the second big challenge of this symphony.  The two halves can often feel somewhat disparate, a Dr Moreau-esque concoction with the head of a lion bolted on to the body of the elephant.  Unifying these two and making them feel as though they belong together is not always easy.  From the opening bars of the final scene of Goethe's Faust, Runnicles managed it.  These quite passages seemed an attempt to come to terms with the horrors we'd witnessed.  Indeed, the incredible beauty he drew from both chorus and orchestra during the quiet moments were throughout the evening as much the highlight of this performance as the apocalyptic climaxes.  That, and his superb sense of structure, building with natural inevitability from ultra pianissimo to triple forte and beyond.  Never, not once, did he allow the tension to flag or the work to sprawl as sometimes it can.  Indeed, an hour and a half flew by.

The cast of soloists was impressive, more so than that assembled for the recent proms performance.  Soprano Erin Wall, her laser-like voice soaring with seeming effortlessness over the vast forces, was exceptional.  Other notable contributions came from John Relyea's powerful bass and mezzo Catherine Wyn-Rogers.  The second part contained more dramatic touches, such as the appearance Nicole Cabell, high in the upper circle, to deliver her two sublime lines as Mater Gloriosa, the more impressive since she'd not been in the hall singing for the last hour and more.

The massed choir, mainly the Festival Chorus, delivered a fine performance.  So too the RSNO Junior Chorus, who dashed on dramatically and up the stairs of the organ gallery for their first appearance.  (Actually, while this accentuated the performance, it was more accident than design.  In the rehearsal they'd been sat on the steps - there were not enough seats in the organ gallery - but complaints of discomfort led to the search for an alternative.  Apparently on Saturday various emails had bounced round - did chorus members have black cushions, would said cushions be a fire risk?  So, in the end, they came in and out at certain key moments, sometimes the last of them turning just in time to hit their notes to perfection.  Necessity is, in truth, the mother of invention, as I'd not have had it any other way.)  In total they numbered over 300, fewer than the 500 odd the Proms managed, and it did mean the choir doubling up rather than being split (not that this was in any way a noticeable problem).  The truth is that while the Usher Hall is big, the stage is not a vast as some, and those present represented the absolute limit of capacity - any more and they would have been falling off into the stalls!

True, you could split hairs here and there: beautifully though the RSNO Juniors sang, there was the odd moment where I would have preferred the tone of boys choir and at times tenor Simon O'Neill was a little nasal, though he was always solid and audible, no mean feat.  But that really is splitting hairs.  The overall effect was extraordinary.

True, the text is not as moving as some, yet as an illustration of the summit of Mahler's genius for orchestration, the sounds it is possible to produce with insanely large forces, deliver a shattering experience.  The memory of those closing bars, as the extra brass once more returned to the grand circle, as Runnicles turned to conduct in two directions, as the volume rose such as to shake very foundations of the Usher Hall, of those vast walls of sound, surrounding us on all sides, are something I will treasure for the rest of my life.  When I interviewed him back in March, he talked about achieving the "third dimension" and how the audience "wants to be engulfed" , certainly he accomplished both on Saturday and then some.  It was being recorded for future broadcast on Radio 3; let us hope that future is soon and for goodness sake let it be issued on CD too.

So devastating was the effect that one wonders if performances should carry a health warning and whether there is not some unexplored explanation here for Mahler's fatal heart condition.  As for me, the music rang in my head late into the night, and I lay in bed unable to get to sleep until the early hours of the morning, still too wired by what I had heard.

I agree with your summation of a very fine performance of a notoriously difficult work to bring off.
In fact, it was the finest concert performance that I have heard Runnicles conduct live. There is no doubt in my mind that he is most at home in the the opera house and in controlling large forces. Even so, the achievement of last night completely eclipsed his Mahler 3 at the Proms, itself eclipsed by the Cleveland peformance in Edinburgh.

Not a weak link in the chain as far as I am concerned though, for my generation, nothing will surpass the epoch making event that was Gibsons performance in the 60's for which the Festival Chorus was created and in which I believe DR sang. He is a worthy successor and it was good to see Lady Gibson in the audience.

Runnicles was indeed in the boys choir in that 60s performance (I asked him about the experience when I interviewed him), but I forgot to mention it in the review.

As one of the 300 (as at Thermopylae) it certainly felt OK, the last time the EFC did it was also with DR in 1994 with RSNO (who didn't seem to like him). This was in Arthur Oldham's 2nd period as chorusmaster and there was a press photocall with DR, Arthur and those of the EFC who had been in the inaugural Mahler 8 in 1965. There are now only 2 left in EFC who were in that performance, one now a retired consultant, who then was a medical student, and the other who was in the boys' chorus, now in his 50s.

Praise BE! this is to be the cover CD for the April BBC Music Magazine, on sale 17 March

I've just got hold of the CD and sadly the sound isn't very crisp and clear, so that what was obviously a great performance comes through the speakers as rather dull.