It wasn't too long ago that I was madly dashing back and forth across London in a desperate effort to make it into the last available Eurostar seat out of the UK after a certain Icelandic volcano had the temerity to misbehave.  The reason: I had to get to Berlin before Donald Runnicles raised his baton on Deutsche Oper's most recent revival of the Ring cycle.  A little less than six months later and he'd brought a small but perfectly formed slice of that action back home to Edinburgh to open the BBC Scottish Symphony Orchestra's new season. 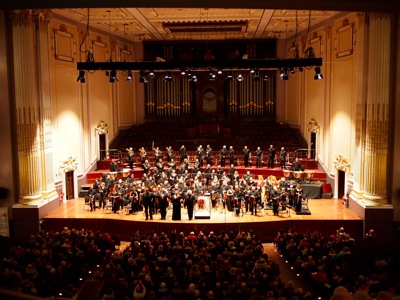 Indeed, he'd brought more than that: Reinhard Hagen reprised his role as Hunding and Heidi Melton, fresh from doubling up as both the third norn and, in a last minute but exemplary stand-in, Gutrune in Götterdämmerung, was perfectly cast as Sieglinde.  They were joined by tenor Stuart Skelton as Siegmund.

A key challenge in bringing opera to the concert hall is maintaining the drama without sets, lights and fire.  From the dramatic opening bars, as turbulent and vividly evocative of a storm as you could wish, it was clear that this would not be a problem.  Runnicles' direction was matched by superb playing from the BBC SSO, on the absolute top of their game.  One particular highlight was the sweetness of the horn playing, nowhere more so than after Sieglinde has offered Siegmund a sweetened drink.

The singing was superb from the outset.  Melton, given a more prominent role than in Berlin, used it to shine and show just what she is capable of - a beautifully toned voice, no shortage of power, and not a trace of the excessive vibrato that turns me off many a soprano.  Opposite her Skelton was at first glance quite lightly toned, yet it was a nice voice and the power was absolutely there when called for, as evidenced by the emotional devastation he wrought with his cry of "Walse! Walse!" Reinhard Hagen rounded off the trio very nicely indeed, or should that be nastily - as his menace was just perfect, it was the kind of performance you really felt ought to get an appreciative boo.

Knitting it all together, though, was Runnicles.  He kept a good pace and ensured momentum was never lost.  Indeed, in his hands, what is one of my least favourite acts of the Ring was something beautiful, touching, dramatic and compelling.  He also ensured a good balance with the singers, meaning that they weren't drowned out, always a worry in concert opera and most of all in Wagner.  There was really only one thing wrong with it: acts two and three didn't follow?  Perhaps next season, buoyed by the success of this, they'll try to mount a full opera, as the SCO are about to do with Don Giovanni, or alternatively repeat the trick Runnicles himself performed with the BBC Symphony a couple of years back, and space three Wagner acts throughout the season.  Failing that, perhaps someone should get this lot into the recording studio.

Wagner, though, wasn't alone in the programme.  The Sibelius violin concerto made an effective pairing and was no less compelling.  Right from the ultra soft opening it was clear we were in for a treat.  Young soloist Vilde Frang might have been standing in for Janine Jansen, but such was the calibre of the performance that you'd never have guessed it.  She was, perhaps, most compelling in the quietest passages, such as those opening bars, and yet she had weight and volume when called for.  She was at home too with the somewhat melodramatic theme of the second movement.  The finale was nothing short of thrilling.  Beneath her Runnicles balanced the forces to perfection, provided wonderfully powerful orchestral climaxes and painted vivid Sibelian landscapes - it left me dearly wanting to hear more of the composer from this team (what a Kullervo they'd do).  In summary, it was one of the most impressive performances I've heard of the concerto.

And, as if that wasn't enough, they're at it again on Thursday, albeit only in Glasgow.  This time the Brahms concerto is on the menu along with the Eroica.  I know where I'll be, where Runnicles will be, and where, if you're anywhere nearby, you should be too.