Collapse? I wish we knew

Collapse is a problematic film. On the one hand it raises important and interesting questions, yet on the other its many flaws undermine the message a more rigorous treatment might carry. 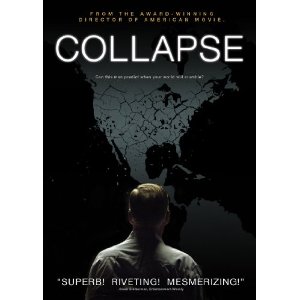 Described as a documentary, it is effectively eighty minutes of Michael Ruppert talking to camera (well, more or less: generally shot at an angle and poorly lit so his eyes are barely visible) interspersed with various archive footage, an ominous minimalist score playing in the background. He ranges broadly, from economics, to oil, to apocalypse, not always quite connecting the dots.

The broad thrust is that we have reached peak oil, namely that we are now past or passing the point where the amount of oil we produce can carry on increasing, as it has since the industrial revolution. This, obviously, is a problem since our economy and civilisation is so dependent on oil, be it to generate our electricity, to power our cars or to be turned into the plastic that comprises the computer keyboard on which I type this (or tyres, Ruppert seems particularly obsessed with tyres). Whether we have actually reached peak oil or not, and Ruppert does not categorically demonstrate this, instead supplying only circumstantial evidence to support his claim, it certainly is worth worrying about as there must surely at some point be a limit to the stuff (indeed, despite Ruppert's claim of the global elite's covering this up, the International Energy Agency acknowledges as much). Diversifying away from our depenence on oil surely makes sense.

Ruppert, though, goes rather further: we are in imminent danger of total breakdown of civilisation as a result of this. At this point it would be helpful to have some hard science about the speed with which production is likely to fall and over what timescales we are likely to see the effects he describes. Sadly such rigour is absent.

Often he seems to be saying incorrect things. In fairness, though it isn't much of an excuse, this may simply be due to an often over-simplistic presentation, particularly given the way he also sometimes appears to contradict himself. For example, the statement that a decline in oil production must mean the peak has been reached. It may very well do, but it isn't the only possible explanation, especially when production has suffered in some countries with large reserves and state control where there has been under-investment (such as Russia and Iran). Indeed, much later he shows us a graph showing a broad increase but fluctuations within. Perhaps he meant broad, long term decline, in which case fair enough, but are we at that point? He doesn't show us the figures or graphics that would prove it.

A similar instance comes with the statement that you won't be able to convert petrol engines to run on anything other than petrol. Perhaps this is truncated, for a little later he goes on to talk about the reasons why ethanol is currently a non-starter. Then there is the statement that the amount of money you can print is limited by how much you can physically print. This isn't quite true, since quantitative, easing which has been much used in the current crisis, is effectively printing money without a press.

These may seem like small or even points alongside the broad and frightening thrust of his argument, and so they are. The trouble is that despite possessing a masters degree in engineering, the topics in this film are not ones I claim any particular knowledge of. This means that spotting errors or simplifications here and there and throughout the film doesn't give me great confidence that the things I don't know about are going to be correct.

A final big problem is the credibility of Ruppert himself. He doesn't have a scientific background. He has been a cop and then, after resigning over what he states was a CIA drug running operation, he went on to become investigative journalist, publishing his own newsletter. The trouble is he rather comes across as a conspiracy theorist. He rebuts this saying rather that he deals in conspiracy fact, which sounds to me very much like the old just because you're paranoid doesn't mean they're not out to get you (an expression that has always annoyed me since that's precisely what the word does mean). And it would be an apt one to apply to Mr Ruppert, not least in relation to his belief that Dick Cheney and other Bush administration officials orchestrated a campaign against him. I have no love for the former vice president, but as the film went on I couldn't help thinking that if this was typical of Ruppert's work then surely, rather than cover up, it would be highly useful for them to point to and say, look, all our critics are nuts. One problem with conspiracy theories is they often fail the Occam's razor test: did Cheney make secret his energy taskforce because he would have caused panic by confirming all Ruppert's claims or was it simply because he wanted to dole out money to his cronies?

One of Ruppert's main claims to credibility rests on his apparent prediction of the current economic crisis. However, it is not quite clear in the film exactly what he predicted, beyond that there would be a crash. Nor, indeed, that predictions of a crash mark him out as such a loan voice. In the years leading up to the crash I lost count of how many times The Economist carried a piece warning of the dangers of the housing bubbles inflating in Britain and America. Again, this film is too simplistic for that - as evidenced by such statements as that Britain is a "basket case" and Greece is in the throes of the revolution, something that the year or more since the film was made doesn't quite bear out. Similarly, his statements as to the relative severity of this current recession don't quite ring true, but they are not challenged.

There is no balance, no real questioning of his case. Occasionally director Chris Smith will ask the gentlest of questions, such as why we should take him seriously now when claims that peak oil had arrived in the 70s proved incorrect. He doesn't answer it. A later reply is even more telling: when asked about debating with critics and whether his evidence is selective he spouts a line about when you know you're right you no longer need to debate. One cannot help wondering if, set against scientific experts and competent debaters, his case might be badly mauled. Often the evidence does seem cherry picked - yes you can point to protests and violence in the aftermath of the economic crisis, but you could point to similar events throughout the last century before his claimed peak.

In the final stages of the film he outlines his blueprint for survival - a return to localism, community, organic farming. And gold. He's very keen on gold. Yet one of his big attacks on paper currency, that you cannot eat it, cannot put it in your petrol tank to power your car, equally apply to the shiny metal. His suggestion of seeds as being valuable currency in a post-apocolypic world are much more intriguing. Then there is his advice to get a landline, since the current economic situation means mobile providers won't be spending as much on maintaining their networks. But hang on, do fixed line networks not also require maintenance? Indeed, due to their high costs, many areas in the emerging world are skipping landlines altogether.

What, you might wonder, of the power of science, technology and human ingenuity to find alternatives to oil. Smith puts this question briefly but Ruppert waves it aside with dismissive talk of man thinking he can play god and being wrong. Surely the immense power of technology and the pace of change deserve some consideration? As I type this, I have beside me a mobile phone that outstrips in virtually every specification my first computer twelve years ago, does much more besides and is both smaller and cheaper (before one has even considered inflation). And for those who doubt the ability of science to tackle seemingly insoluble global crises there is the example of Norman Borlaug. Perhaps such avenues offer no hope, but Ruppert provides no justification for supposing so. Not only is this one more frustrating absence of rigour, but it also sits uncomfortably with his later talk about the indomitability of the American spirit in respect of his own survival. If, as he says, this is as bad as the threat faced by the dinosaurs (who had neither technology nor science), then why should any of us survive?

And yet, for all these criticisms, Ruppert is a compelling, if somewhat tragic subject. In particular, the story of an early relationship that fell apart: the woman, he tells us, was a CIA agent. Was she really, or was this the rationalisation that has helped feed his outlook on the world? Yet there is something sunny in his outlook too - wanting to work your own land is a classic part of the American dream, and his aim to see how many smiles he can raise as he walks his dog is charming. He certainly passionately believes what he is saying. The trouble is that none of these things constitute a convincing scientific argument

Peak oil, the collapse of civilisations, and whether we are in the vicinity of either are a fascinating subjects. Sadly this is not the film to bring them to a wider audience and, worse, it is made in such a way that it is easy for those who would rather not entertain such ideas to brush it aside.