Taking my seat in the Usher Hall on Saturday afternoon, it was nice to see a rather different demographic than is normal at an SCO concert - a lot younger, for a start, and lots of families too. Similarly, I can't remember the last time I saw such an ocean of colour in the organ gallery. 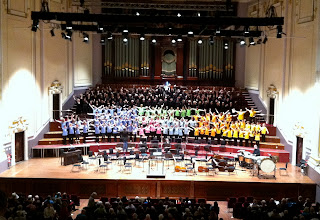 They were there for Voice of a City, a concert bringing together singers, especially children, from across to the city, to perform with the SCO, the brainchild of their excellent education and outreach department. The first half was given over to The Land of Counterpane, a setting by Howard Blake of poems by Robert Louis Stevenson from A Child's Garden of Verses. It was originally composed for the tricentenary of The Mary Erskine School, and it was well over a hundred young singers from Erskine Stewart's Melville Schools who were there to perform it. 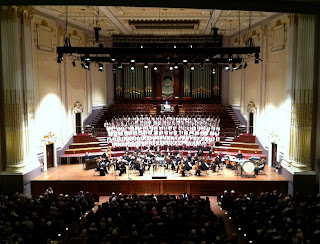 The work opened, though, with a spoken solo, delivered with great enthusiasm and stage presence by 12 year old Jack Williamson (whose self-written programme biography put to shame the dull lists most professional artists use in terms of being an enjoyable read). The texts were both well chosen and set in a nicely lyrical manner. The piece has a nicely circular nature as near the end the choir, singing very nicely throughout, deliver the opening verses again. This was followed by a spoken epilogue from an older person (Graham Bruce). All in all it was a fine performance of a compelling work. I was glad when, during the interval, free CDs of their recording of it were handed out (not bad given the tickets were only £10 a head). If I had a reservation it was that the spoken portions were delivered amplified, giving a slightly odd balance. In the Usher Hall's fine acoustic, and given conductor Gary Walker kept the orchestra well down, I'm not sure this was necessary.

After the interval came Edward Harper's The Voice of a City, originally commissioned by the SCO back in 2003. Two choirs, an adult one drawn from the local community, and a children's choir drawn from schools across Edinburgh, had been assembled for the occasion. SCO Chorus Master Gregory Batsleer stepped onto the stage to warm the choir up, not something one normally sees, but it was actually great fun to see a sea of coloured shirts flapping their arms and calling out vocal exercises. And while they might not perhaps have had quite the polished discipline of say, the RSNO junior chorus, in terms of fidgeting, or diction as fine as the singers in the first half, they delivered a good performance none the less and there was an enjoyable energy to it.

The work itself didn't quite grab me as well as the Blake, taking a bit longer to get going. But when it did, notably with The One O'clock Gun, with its opening, slurred trombone solo, stylishly delivered by Lorna McDonald, and its enthusiastically shouted cries of "Bang!", it was very fine indeed. So too the organ solo, played by John Kitchen, followed by a name check for many of Edinburgh's famous sons and daughters (mainly sons, it must unfortunately be said) which made up the finale.

Throughout, the playing of the SCO, under the baton of Gary Walker, was up to their normal high standards and he balanced the large forces well.

Yes, the audience was noisier than you might expect at a normal SCO concert, and yes there were a fair few crying babies and the like but, even if like me you were there purely for the music rather than because you knew someone involved, it was still a most enjoyable way to spend the afternoon.

The concert was also tied into Edinburgh's Let's Get Lyrical, a celebration of song lyrics (on which topic I hope to blog soon). The programme contained a post-it note for you to provide your favourite lyric. Spare a thought for whoever had the job of sticking those in!

(You can hear our interview with SCO Chorus Master Gregory Batsleer here.)
Posted by Tam Pollard at 20:30