The other week when this concert was performed in Berlin, and broadcast via the Digital Concert Hall, it was billed as the 8th symphony, here in London it was the 9th (and you can argue it's number 7 too). Regardless of how you choose to number it, or the disputes are over the numbering, what is surely beyond doubt is that the great C major ranks among the finest symphonies ever written. 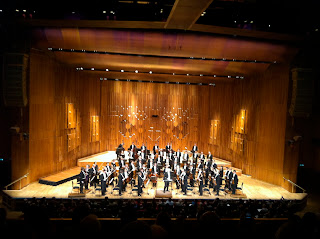 It stands on the cusp between the classical and romantic eras, and one measure of its greatness is how wonderfully it responds to both a more classical approach, a la Mackerras or Erich Kleiber, or an unashamedly romantic take, such as Furtwangler provides. Rattle's interpretation, as will be known to those who own the recording he made with the Berliners a few years ago, followed firmly in the footsteps of his predecessor in this regard, and was utterly thrilling for it. This was particularly evident both in his choices of tempo and, as importantly, his changes therein.

Aided by playing from the orchestra that was simply stunning, he delivered thrilling crescendos, hauntingly beautiful slow and quite passages, moving between them utterly naturally. The combined effect was next to devastating at times, such as during the first movement where the ears were battered with wave after musical wave washing over them. Yet at other times the orchestra danced nimbly through Schubert's writing. Frequently it was a genuine challenge to keep still, for the best reasons.

The playing, impressive throughout, was perhaps most astonishing in the finale. Here, the strings delivered intricate passages at high speed with the utmost delicacy. It was a marvel to behold. As he had done in yesterday's Stravinsky, Rattle arrayed the basses in a line at the back, providing extra weight to those driving string chords during the final movement and elsewhere.

There were many magical moments, such as the expertly held pause in the second movement, followed by some wonderfully soft pizzicato presaging the beautifully played cello theme. Among the many superbly judged solos from within the orchestra, highest praise must surely be reserved for the principal oboe (presumably either Jonathan Kelly or Albrecht Mayer - Edit: thanks to the commenter below for confirm it was Kelly) whose contributions Rattle rightly singled out at the end.

In short, granted it's possibly a little late for that phrase, it was a performance to treasure.

It wasn't the evening's only highlight either. Before the interval they gave the UK premiere of Toshio Hosokawa's horn concerto Moment of Blossoming, performed by and dedicated to the Berliners' principal horn Stefan Dohr. As the title suggests, the piece is inspired by the blossoming of the lotus flower and Hosokawa seemed to have captured this feel well. The Berliners' ability to produce the quietest of pianissimos came into its own here, something further enhanced by Rattle's judgement in placing a trumpet, a trombone and two horns around the balcony, creating an enveloping effect, especially at the outset as they blew gently and unconventionally to create the musical equivalent of a light breeze (in the process totally putting to shame the traditional hand-crank wind machines well known to Strauss lovers). Out of this grew some beautiful climaxes, before the piece faded away to silence again at the end. Indeed, while nominally a concerto, and certainly having a prominent and well played role for Dohr, this was not a piece for a showboating soloist, but rather intricately judged and balanced for the whole orchestra. I wonder if Jonathan Mills would consider bringing it to Edinburgh, I'd love to hear it in the Usher Hall and it would fit well with the eastern theme this year. 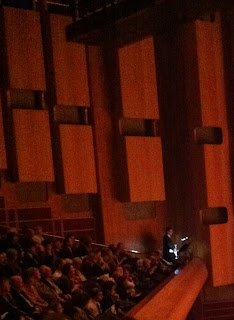 Time, it seems, to bestow one of our eclectic series of awards. So, to Simon Rattle, the Berliner Philharmoniker, Stephan Dohr and Tashio Hosokawa, I present: The Donald Runnicles Award for Outstanding Placement of Offstage Instruments to Produce a Magical Effect, Unreproducible on even the Very Best Hi-Fi Equipment.

For me, the evening's only damp squib was the piece that opened the concert, Haydn's 99th symphony. It wasn't that the playing was bad, it most certainly wasn't, just that it seemed rather heavy. Perhaps it is just being spoilt by Robin Ticciati's recent performances of late Haydn with the Scottish Chamber Orchestra, which have displayed a vibrancy, a bounce and a sense of agility that the Berliners didn't quite seem to have. Nor did Rattle seem to achieve the transitions between light and heavy, fast and slow, quite so wonderfully naturally (as, by contrast, he certainly did in the Schubert). Stripped down to something more like chamber orchestra size they may have been, but it didn't quite feel like the real thing.

If you couldn't get a ticket, or if you want to relive it, the Berlin performance can be found online here (for a fee). The concert marked the end of the Berliners' stay at the Barbican. Tomorrow they return to the Southbank and play the final concert of their stay in the Festival Hall. Mahler 3 - I can't wait.
Posted by Tam Pollard at 00:28

Thanks for that (I did send a message to the orchestra but they never replied).