This festival has had a fairly high quotient of rarely performed large works. With Liszt's Faust symphony, for the first time I found myself feeling that here was something that was unjustly neglected. This reaction had been well trailed, as a few weeks earlier Jurowski brought it to the Proms with the London Philharmonic. In the Usher Hall, together with the Orchestra of the Age of Enlightenment, he found the same drama and energy, not only whipping the orchestra up into fantastic climaxes and bringing out all the excitement of the finale's marvellous theme, but also ensuring sufficient tension and momentum during the slower moments. Then there was the beauty they found in the slow movement, depicting Gretchen. In the wrong hands this piece could perhaps be a long seventy-five minutes, but those hands do not belong to Valdimir Jurowski or the members of the OAE! 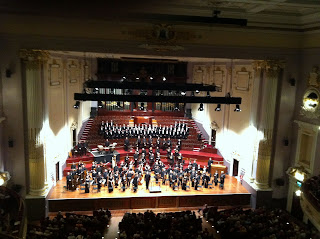 It is an ambitious and challenging piece to attempt with a period band, as some of the players note in this video on their website, yet they rose superbly to the occasion with playing that was generally of the highest order. True, there was the odd fluffed horn note here and the occasional slip in oboist Anthony Robson's generally excellent, not to mention epic and exposed solo passages in the second movement, yet amid the edge of seat intensity they brought, that didn't really matter. There was a fine turn from bassoonist Jane Gower, to highlight one of many, not to mention the orchestra's intoxicating low string sound, aided by what seemed like a comparatively big force of ten cellos and eight basses. Their performance also underscored a debate I had recently about period and modern instruments, albeit in the context of harpsichord versus piano for Bach, were I argued that I don't mind which so long as the artist plays it compellingly. To my mind, these two fine performances (last night and at the Proms) very much illustrate the same point.

At the climax the men of the festival chorus, who'd had a front row seat in the organ gallery for the first seventy minutes, got to their feet and lent a fine extra weight and yet more drama. Tenor Kim Begley generally sang well in the solo part. An electric organ was used, so that the tuning was right, though this balanced nicely and didn't spoil things. Indeed, together they filled the hall with suitable weight for the finale. All in all, it was a convincing argument for this to be performed more often.

The concert had opened with Weber's Der Freischütz overture. This too was full of drama. Indeed, Jurowski's extensive experience in the opera pit, most notably from his tenure at Glyndebourne, was apparent throughout the evening.

In between came Mendelssohn's violin concerto with soloist Alina Ibragimova. At risk of over-using words such as drama and energy, these seem most fitting here too. It was not a reading that hung about and may have been too hard driven for some, but I found it thrilling. It also felt fresh, which in such a familiar work is often nice. Jurowski's accompaniment was sensitive, keeping the band nicely balanced beneath her, ensuring she was audible even when, as was often the case, she played very quietly. Yet under his direction the OAE also had plenty of punch, which seemed to fit nicely with Ibragimova's interpretation.

All in all, it was for me the most satisfying Usher Hall concert of this festival so far. They took a rarely performed work and made me wonder why; they took a frequently performed work and made it feel freshly minted. This was an evening filled with passion, drama and energy, one that frequently had me on the edge of my seat. This was also, if you count his two Proms, the third time in the last few weeks that Jurowski has delivered a really satisfying programme - hopefully we'll see them back in Edinburgh soon. Perhaps they could be persuaded to do one of their Night Shift gigs up here at a future festival in addition to a regular evening concert. That would be really interesting.... In the meantime: