If there were two characteristics that marked out Donald Runnicles and the BBC Scottish Symphony Orchestra's performance of Mahler's 2nd symphony, they were drama and theatre. Drama in the way he built tension and then released it in epic climaxes, in how he shaped the score and in how the players and singers responded to his every gesture. But there was also theatre, from the placement of the offstage brass and percussion, both outside the dress circle and back stage, enveloping us in sound, to those same extra horn players dashing on stage at the close to literally turn things up to eleven. 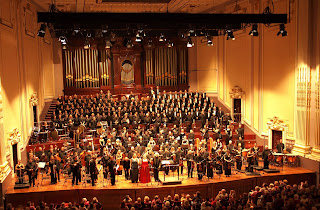 For me the first movement was a particular highlight, more compelling in Runnicles' hands than I sometimes find it, such phenomenal punch to those climaxes. At the end, he chose not to observe the five minute pause Mahler requests in the score, wisely in my view, since I find that saps the drama. Though when I saw Jansons do so, during which time he left the stage, it had me fearing for his health. The slow movement was notable for its extreme dynamics, marked by especially fine string playing in the quieter passages, and giving it an appropriately other-worldly feel. The third movement, which shares its theme with Mahler's setting of St Anthony's sermon to the fish, had a nice wit to the opening but also plenty of weight elsewhere.

It was not perfect and there were more fluffed horn entries than would ideally be the case. Yet here, as with the OAE on Friday, was proof that if the drama and passion is there, that doesn't matter. In general the playing was excellent, the strings sounding especially fine; so too much of the brass, the decision to seat trombones, trumpets and tuba in a row at the top giving them a nice prominence in the cocktail of sounds.

Runnicles' experience in the opera house showed in his sensitivity as an accompanist. This was true nowhere more so than in the Urlicht, which Karen Cargill sang beautifully, her voice carrying as great a depth of emotion as you could wish for, while beneath her the playing of the orchestra was perfectly balanced. Soprano Meagan Miller, though fine, paled slightly next to her. The Festival Chorus turned in an excellent performance in the finale. Runnicles wisely opted to keep them seated until the very end, their hushed singing suitably setting the tone before they rose to their feet for the work's dramatic conclusion.

That conclusion was underscored by the Usher Hall's organ, adding another layer of physicality to the sound (and a marked improvement over the last time I heard the work - at the Barbican where they had to make do with an electric organ, which simply isn't the same). Here was music to make you tremble and yet also to raise you up.

Overall, it did not have quite the same impact for me as last year's Mahler 8, but then I don't find it quite such a satisfying piece (though this probably puts me in a minority among Mahlerians), but it was a thrilling evening nonetheless and a highlight of the festival.

It was recorded for future broadcast on Radio 3; hopefully we won't have to wait too long. One wonders what choral blockbuster this team will treat us to next year? If the festival has any sense they'll recognise they have one of the world's top opera conductors and take advantage of that - a concert performance of Fidelio perhaps....