The Muppets, or A Lesson in Having Faith

Many people coming to this film (or at least those bringing their kids) probably discovered the Muppets via the original television show. Although I can dimly recall the cartoon Muppet Babies when I was growing up, and the short-lived Muppets Tonight I first really remember getting the Muppets via two of their classic films – Muppet Christmas Carol (which a former flatmate used to invite friends around to watch before Christmas every year) and Muppet Treasure Island. I suspect this effected my taste in Muppets – I was fonder of Gonzo and Rizzo, and even more so of Sam the Eagle (who has a marvellous extended role in Muppet Treasure Island) than I was of those who were more central to the original show like Kermit, Miss Piggy, Fozzie and Doctor Teeth and the Electric Mayhem. All of the latter play a more central role than Gonzo, Rizzo (who is virtually invisible here) and Sam (who appears but rarely speaks) in this film. This reflects a broader return to the show's origins. In many ways this is an extended homage to the original show, but it is also a reminder both that these characters and some of the most central things they have said are timeless. 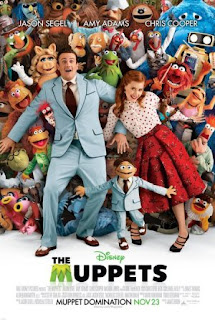 The central superb idea of this film is to establish a common humanity of humans and Muppets. Thus the key relationship of the film is between Walter (the new Muppet character) and his brother Gary (Jason Segal). On one level the connection Walter makes between himself and the Muppets when he first sees the TV show is perfectly obvious – he's a Muppet therefore of course he belongs with them, but it also captures an idea the Muppets have often stressed – that being a bit different from the herd, feeling a bit separate is nothing to be ashamed of – that you should in essence be happy in being yourself. By creating such a close human-Muppet relationship, this idea is rendered more powerful and poignant.

The other great strength of this film is the songs, with the exception of Chris Cooper's (playing evil oil man Tex Richman) rap. Some of them are familiar, with The Rainbow Connection packing a real emotional punch. Some of them are borrowed – I thoroughly enjoyed watching the Muppets putting the theatre to rights to Starship's We Built This City. Of the new songs I thought the best were Kermit's Pictures in My Head (with nice cameos from the band, the Swedish Chef and Fozzie) and Life's a Happy Song.

Both Jason Segal and Amy Adams seem at home with the Muppets (as Michael Caine in Christmas Carol and Tim Curry in Treasure Island also were) and this also makes the film work and there is some fine cameo work, particularly from Jack Black.

When it comes to the Muppets themselves I'm reminded of what was said always to be the tricky business of making Star Trek films – that you had to try and find scenes for all the players so that no fans of particular crew members, or in this case Muppets are disappointed. Aside from new arrival Walter, Kermit, Miss Piggy, Fozzie and the Swedish Chef seemed to me to get the largest slices of the cake. Camilla and the Chickens also get a number all to themselves. Beforehand I had hoped for a good scene for Sam the Eagle, but something rather interesting happens here. Sam is present in quite a few scenes but almost never speaks. He has been increasingly silent since Frank Oz retired so far as I have observed, but I decided as I watched this afternoon that one could also see a happier explanation. Previously there has always been a sense of Sam not altogether belonging to the rest of the bunch – not perhaps surprising since originally he was haunting the place trying to censor the show. Here though Sam for once joins untroubled into a full-scale musical number – a glorious Barbershop version of Smells Like Teen Spirit including Beaker – somehow that seems to fit with the film's larger message, and allowed me to forgive the scriptwriters for not giving him more to do.

All in all, the film makes for a lovely, joyous and poignant afternoon at the cinema. It is a reminder to be kind, of common humanity, that sometimes you just have to trust that things are going to work out. For personal reasons I was especially thankful for that.
Posted by Finn Pollard at 19:16