Where's Oramo? At the BBC Symphony Orchestra (from 2013)

Sakari Oramo ranks among my favourite conductors, and while I haven't heard him in the concert hall as often as I might like, he has never failed to impress, from the first time I encountered him in Basingstoke, when he and the CBSO introduced me to Sibelius via the 5th symphony, to last October when I made a mad dash down to London to catch his debut with the BBC Symphony Orchestra (Sibelius featured there too). 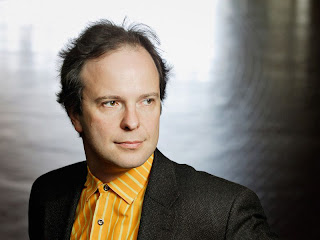 Prior to that concert, I had already spotted a useful alignment of diaries: Oramo's tenure with the Finnish Radio Symphony Orchestra ends this year, so too Jiří Bělohlávek's with the BBC Symphony Orchestra (and Kenneth Walton noted that Oramo was keen to return to the UK, though the RSNO job he suggested never seemed terribly plausible). Thus, I hoped it would go well and that one thing might lead to another. Indeed it did, and now it has, with the announcement that Oramo will take up the Chief Conductorship with effect from the 2013 Proms.

What makes Oramo such a good choice? Well, first and foremost stands that debut concert. The orchestra played superbly for him, and it was a compelling evening. So much so, that I concluded my review thus:

Based on last night, Oramo ticks all the boxes, excelling with both new music and British music, he also seemed well liked by the orchestra (as far as one can judge such things). I've heard excellent Janáček, Wagner and Nielsen from him in concert too. Doubtless pleasing Where's Runnicles will not be at the top of the selection committee's agenda, but fingers crossed nonetheless.

Obviously we're glad that they listened! Indeed, first we called for Runnicles, and got him, now Oramo. What to ask for next....?

But instead of pondering that, let's dig a little deeper. Originally starting as a violinist in the Finnish Radio Symphony Orchestra, he studied under Jorma Panula (interestingly James Lowe, another favourite conductor of ours, is also a pupil of Panula). A little while later, he made his debut in the time honoured manner of putting down his violin to step in for a sick conductor and the rest, to use a cliche, is history.

He largely made his conducting name during his ten years as music director of the City of Birmingham Symphony Orchestra. His achievements there are impressive for several reasons, not the least of which is that he was stepping into some pretty intimidating shoes, those Simon Rattle had vacated when he moved to Berlin. Yet Oramo left an already fine orchestra in better shape than he found it and helped lay the foundations which Andris Nelsons is taking further and using to prove that the CBSO is among the finest ensembles in the UK.

After hearing yesterday's news, I went back to the archives of the CBSO podcast and dug out this entry from June 2008. Tommy Pearson's introductory blaze of statistics is instructive: 10 years, 404 concerts, 421 separate pieces and 26 premieres (a later contributor adds that 10% of the works he performed were by living composers). His time there saw the Floof! contemporary music festival. Similarly, if one looks to his discography one finds the likes of Lindberg, Saariaho, Foulds and Kurtag. It is essential that the chief conductor of the BBC SO is not only at home with new music but is capable of championing it, and surely Oramo meets this criterion.

Another key strength is his ability to combine this with his solid, and sometimes eye-opening readings of the classics. His most recent discs, a set of Schumann symphonies from Stockholm (where he is also chief conductor and whom he brought to the Proms last year) are wonderfully vital and invigorating. Perhaps one of the most remarkable achievements from his time in Birmingham was his readings of Elgar. In some ways reminiscent of what Haitink achieved with Vaughan Williams, Oramo brought a fresh perspective and his thrilling Gerontius remains one of my favourite recordings of the piece. It is a great shame that the tapes made during the weekend that he did it together with the The Apostles and The Kingdom never made it to public release. I eagerly await his forthcoming Stockholm recordings of the symphonies. In short, there is a reason he became the seventh recipient of the Elgar Medal.

Taking all that together, I do not share the fears expressed by a commenter on another blog, namely that his appointment would mean endless Sibelius. Of course, being a Sibelius nut I wouldn't mind so much (especially since in Scotland we last had a complete cycle of the symphonies in 2006, so haven't been nearly as swamped as London has been), and I'm sure he'll do some. After all, he is amongst the composer's finest living interpreters. Yet I do not expect the composer to dominate. Since 2006 he has visited the Edinburgh festival with the FRSO three times, bringing four concert programmes, only one of which featured Sibelius, the others consisting of Wagner, Nielsen, Bruckner and more. I expect Oramo to surprise me, to bring me things I haven't heard before and to persuade me. As is probably obvious, I can't wait.

I have for some time felt that Oramo was underrated. Indeed, to read some articles I've seen written about Nelsons and the CBSO, you could be forgiven for thinking that he succeeded Rattle directly! Yet to judge from the steady stream of positive messages on twitter yesterday (not to mention pieces like this in the Guardian), it seems that if that actually was true it isn't any more.

The only downside is that we will not hear the results until 2013. Indeed, when the BBC SO recently announced their 2012/13 season, sans Oramo, I took that as an ill omen that the appointment might not come to pass. It now seems more likely that in the booked years ahead world of classical music, this was as soon as they could get. His tenure will start with the 2013 Proms. If he's taking suggestions, Kullervo would make a cracking opening concert.

Oramo will only do four concerts of the 2013/14 season which is not a vast amount. It is not clear if this will increase in future years (compare to one Donald Runnicles who does five weeks in Scotland, plus one at the proms and two touring). Hopefully his time commitment will grow in future years.

Regardless, it is excellent news that such a talented conductor who can get such fine results from the orchestra will be returning to these shores regularly, and to a broadcast orchestra (so we won't have to travel to hear them, though I probably still will). May they enjoy many happy years of partnership.

In the meantime, a good flavour of Oramo can be found via this Spotify playlist which contains all of his recordings available on Spotify (sadly one or two highlights, such as his recording of Magnus Lindberg's Graffiti and that Gerontius, are missing). As always with big playlists on Spotify, command-g (control-g on a PC) for album view is your friend.

It would seem that the magic of prophecy is yours alone, as I have been at least implying that John Berry should cease to be Artistic Director of ENO for ages and he's still there!