EIF 2012 - Gergiev and the LSO's Brahms and Szymanowski residence

This four concert series was one of the longer festival residences I can remember. In the past, it has sometimes been the case that after such a sustained exposure to a single group of artists one can tire of them. So it is pleasing to report that after four consecutive nights of Valery Gergiev and the London Symphony Orchestra surveying the symphonies of Brahms and Szymanowski, as well as the concertos of the latter, such fatigue was not in evidence. 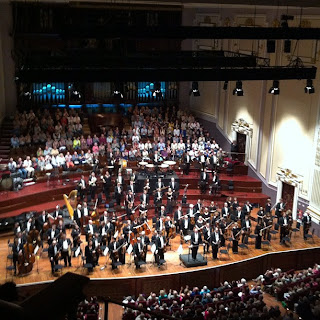 Brahms and Szymanowski were perhaps not the most obvious pairing, and even after the cycle they remain so. That is not to say the two composers sat together uneasily, in general the programmes fitted well, but rather that their combined presence didn't appear to offer great insight into each other's works.

Going into the cycle, I had misgivings about the Brahms. While I admire much of his work, I do not always get on with Gergiev's interpretations. For example, although it is well regarded in some quarters, I cannot stand his Mahler. Fortunately, such concerns were largely misplaced. This was helped to a great extent by the exceptional playing of the LSO. I fear in the past I have not rated them quite as highly as they deserve, though this is because I normally hear them in the horribly unflattering acoustic of the Barbican. In the Usher Hall, the quality of their string sound was really a treat, especially when playing at fully strength. The same must be said of the winds, and these performances brought out many details in Brahms' writing for them more clearly than I've noticed before. Indeed, technically speaking, over four nights there was little to fault in the whole orchestra.

What then of Gergiev's interpretations? Well, there was much to like, especially the way he often found the sense of yearning that for me pervades much of Brahms' music yet which is absent from too many mediocre accounts. There was also plenty of excitement along the way and much beauty in the slow movements. He seemed at pains to exaggerate contrasts as much as possible, especially in terms of tempi, and it is here that most of the flaws emerged. Sometimes he took this too far, slowing down so much that he lost all sense of momentum. This was the case occasionally in the first, and more frustratingly (since the rest had been quite compelling) in the finale of the fourth. Most critically, this happened throughout the disappointing account of the third. Still, on the other side of the column, they delivered one of the finest and most persuasive accounts of the second symphony I have heard. Perhaps it helps that I have never been a huge fan of the work, but here Gergiev and the orchestra seemed to get everything just right: there was beautiful playing in the andante, which was intensely moving, and elsewhere thrills when called for. Even in the less satisfying accounts there was still much to admire. The trombones have a long wait in the first symphony, but their entry, when it finally comes, is one of the finest pieces of writing for the instrument and the LSO executed it as well as I have ever heard.

It should probably also be noted that these interpretations are the very start of a series that will doubtless evolve throughout the next year (and eventually be recorded for LSO Live) and there was a sense of experimentation in the performances. One did have the feeling that there might be a rather different account a few nights later. As such, it will be interesting to see how the recordings turn out, though I can't help thinking it's a slight shame they are being made in the Barbican, which will surely steal the orchestra's rich sound.

Szymanowski was also an unknown quantity, but for different reasons, since his symphonies were unknown to me. At the end of the cycle, my feeling is that in general he is a greater writer of concertos than of symphonies. This is in no small part because the fourth was by far and away the most persuasive and that is, in fact, a piano concerto. The work is an awesome spectacle and provided a fine platform for pianist Denis Matsuev to dazzle us. There were some nice touches of orchestration, particularly a run down the piano which then descended on into the brass. The outer movements overflowed with thrills while at times in the slow middle movement the piano took a back seat for beautifully played flute solos from Gareth Davies. The blazing finale was such that it did rather beg the question of why on earth it had been put at the start of the programme as opposed to the end (occupied by Brahms' fourth symphony). For me, it is probably alone among the four in passing the 'why on earth isn't this programmed more often' benchmark.

Elsewhere in the cycle the third, Song of the Night, featuring the festival chorus, was also a satisfying piece, and would doubtless have been more so were it not for the fact that some idiot had given permission for a loud pop concert to take place across the street. The upshot of this was that the work's several dramatic pauses were not able to accentuate the spectacle between them as much as they should have. For those sitting further back than us, it was probably even more severe. According to the license application, the Usher Hall themselves were involved in this. On twitter they have denied organising it, but not responded to questions of why their name appears, saying only that the matter is under investigation. However, the chorus turned in a strong performance and tenor Steve Davislim did well standing in for a sadly indisposed Toby Spence (we wish him a full and speedy recovery).

The first two symphonies, while interesting, were not totally satisfying. Especially in the first, one could hear similarities to the likes of Strauss and Wagner and often he sounded reassuringly romantic. Yet what makes Szymanowski interesting for me as a composer is how he then seamlessly lurches into a world that feels far more modern and then back again. Gergiev, often conducting with a toothpick, managed these gear changes well. The LSO were on no less fine form than for the Brahms, delivering pianissimos and blazing climaxes with equal aplomb.

The symphonies had been paired with the two violin concertos, which are far more mainstays of the repertoire. Indeed, in the 2010/11 season we were treated to performances of the second by two of the three main Scottish orchestras. For me, the interpreters had their work cut out as I have heard Frank Peter Zimmerman deliver effective masterclasses in both. In the first, Nicola Benedetti was solid enough, though did not match that level of skill, nor for me offer any particular insights. Leonidas Kavakos was excellent technically in the second, if, again, no Zimmerman, but it felt as though he did need slightly more sensitive accompaniment in places than Gergiev delivered. Nevertheless, there was little beyond this sort of hair splitting to quibble with in either concerto, and both accounts were fine and compelling and on the evidence of this cycle it doesn't seem unfair that they are among Szymanowski's more frequently performed works.

All in all, I'm most glad to have opted to do the full cycle, certainly it was more illuminating than any of the individual concerts. For those in London, and the other locations where the cycle is being performed, it is well worth attending. That said, no one instalment delivered a total knockout blow, since the very best performances were often paired with others that were less successful. Most of all, it was wonderful to hear the LSO in a good acoustic and hopefully we'll see the orchestra back up here again soon which, given Gergiev's position as the festival's honorary president, seems most likely.
Posted by Tam Pollard at 17:09