After Friday's opening damp squib, it was fortunate that the man himself was on hand with the sort of work genuinely capable of blowing the doors off buildings: Richard Strauss's Alpensinfonie. The contrast with the Delius could hardly be more stark as Strauss employs similarly epic forces but orchestrates them to create jaw-dropping effects and vistas as he takes the listener on a climb through the alps. 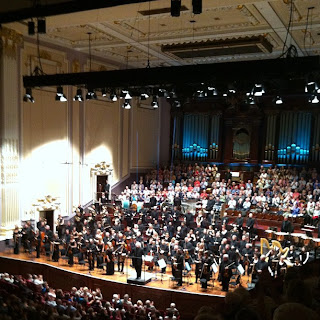 In the wrong hands, the symphony can feel too episodic but with a Strauss conductor of the calibre of Runnicles such was never likely to be the case, and sure enough the music and narrative flowed smoothly and naturally. As the orchestra led us higher up the mountain they unveiled stunning alpine scene after stunning alpine scene. About the only reservation would be that the opening and closing nachts were not quite as pin drop quiet as needed for ultimate effect.

The piece places significant demands on the players, most notable the brass who have no shortage of the exposed entries. Here the BBC SSO acquitted themselves superbly, joined, it must be noted, by what must have been most of the professional brass players in Scotland. It wouldn't really be a Runnicles concert without some superbly placed offstage brass, and true to form a substantial battery of players had been located just outside the doors of the grand circle, creating a wonderful stereo effect where we were seated.

It would be unfair to dwell too much on the brass though, since strings, wind and percussion were all on equally fine form. The percussion most especially during the storm. Perhaps aided by the experience of the fine Scottish summer we have enjoyed this year, they were able to whip up as frenzied and pulverising a spectacle as you could wish for. In a particularly nice moment, one of the percussionists pulled up his sleeves prior to giving his wind machine a good crank.

In short, it was beautiful, thrilling and quite draining: by the end you more or less did feel like you had climbed a mountain. When Radio 3 broadcast it on Friday 14th September in Afternoon on 3 it is a must hear.

The first half pairing was Beethoven's pastoral symphony, which with its overlapping themes made an interesting coupling. Runnicles took a slow approach, which showed off the beautiful textures on offer in the work to the maximum extent. True, there are other more exciting takes on the piece, but it is nice to hear this sort of interpretation when you have an orchestra that is up to it, as the BBC SSO most certainly are these days, whether it be the rich strings or fine wind playing in the third movement. The storm didn't have quite the terrifying drama it can do, or indeed of Strauss's, and so the calm that followed didn't glisten quite as brightly as it might have. Yet it was still a persuasive and satisfying account.

One final note, the evening provided ample opportunity to showcase just what a fine violinist the orchestra's new leader Laura Samuel is, her years of experience in the Belcea Quartet shining though.
Posted by Tam Pollard at 13:54

Thanks for this report, as always. Wish I could have been there.....