A few weeks ago someone gave what seemed a very silly answer on University Challenge. For what keyboard instrument, asked Jeremy Paxman, did J S Bach originally compose his Goldberg Variations? The first wrong guess, albeit not absurd, was the organ. After all, Bach wrote a lot of music for the organ. My Hurford box set weighs in at 17 discs. After a few moments and a come on, someone from the other team buzzed in and guessed: synthesiser. Paxman gave the withering response he reserves for when students get an arts question a few hundred years out; I, and, I imagine, many other classical music fans, shouted at the screen loudly enough that my brother came into the room to ask what the matter was. But after I was done railing against the ignorance on display, I started to wonder if it was really such a stupid answer. After all, along with just about everything short of the kitchen sink, Uri Caine’s take on the Goldberg Variations probably does feature a synthesiser or two somewhere. (I can’t find a definitive list online and my CD copy is currently in storage). 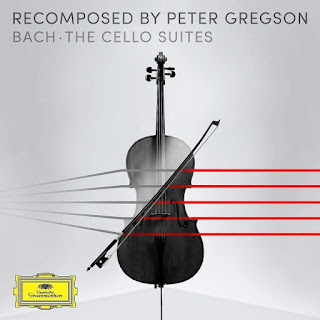 Perhaps the student in question was, like me, a fan of Peter Gregson who has recently been mixing Bach with synthesisers. I’ve been enjoying his work from his impressive debut album Terminal, to his more recent strings and synths mashup Quartets Two.

Gregson is an interesting artist, an accomplished cellist, on both the traditional instrument and the electric cello. Strongly influenced by sources such as the Kronos Quartet and Steve Reich, his music often mixes overdubbing and electronics with acoustics for excellent results. He would have been my suggestion had I been asked who Deutsche Grammophon should call when adding the Bach Cello Suites to their ReComposed series.

Recomposing, or rearranging Bach has a long and distinguished history. Indeed, in some cases rearrangements have even become standard: those Goldbergs are now more commonly played on a modern piano than the harpsichord. From bigger orchestrations or instrumental substitutions at one end of the scale, we move through Jacques Loussier’s jazz rearrangements for piano trio, to the far end of the spectrum and Uri Caine’s Goldbergs which add the Verdi Piano Duet, Luther’s Nightmare, Stuttering, Dr Jekyll and Mr Hyde, and Tango variations to Bach’s original mix. It can be a bit much for a single sitting. Beyond that you have inspirations, such as the Brandenburg Project (I'm looking forward to hearing Olga Neuwirth's typewriter again when the recordings come out).

Peter Gregson’s work for me fits somewhere between Loussier and Caine: recomposed rather than simply rearranged, but not so extremely so: you wouldn’t, for example, know the difference from the track listing. For the most part, it is always quickly recognisable to those who know the original well, with the odd exception such as the pizzicato opening of 2.2. Allemande, or the faint scrapings that commence 6.2. Allemande.

His approach is largely two pronged. One is the addition of four synthesisers: a Juno-60, a Jupiter-4, a Moog Voyager, and Moog DFAM (dummer from another mother, to the unitiated). These often provide a background, counterpoint, or additional textures. The second is an expansion from one to as many as six acoustic cellos, with Richard Harwood, Reinoud Ford, Tim Lowe, Ben Chappell, and Katherine Jenkinson joining the composer. There is arguably a third prong in the way these elements are blended. Reamping: where the synth tracks have been laid down in one set of sessions at the converted church that is Air Studios, then in a second, the cellos played over the top. But Peter Gregson has gone further, as this interviews below show, taking full advantage of the architecture and acoustics of the venue. We have at times offered an award for this sort of thing, but "The Donald Runnicles Award for Outstanding Placement of Offstage Instruments to Produce a Magical Effect, Unreproducible on even the Very Best Hi-Fi Equipment" is really reserved for effects in real life, so it will need to wait for a live performance. I’d love to hear one. It may be better to let the composer explain:

The first notes of the opening prelude seem fairly conventional, but the extra voices soon appear.

Throughout the album, Gregson uses his synthesisers to good effect. Highlights for me include the rippling flute like synth background counterpoint in the 1.3. Courante, and the way synths and cellos blend together in the gorgeous and all too short Sarabande from the first suite. Then there are syncopated rhythms you get in movements such as in the 3.1. Prelude and the 4.3. Courante. The Preludes from the 4th and 5th suites wouldn’t be out of place in a Blade Runner score, and yet there still is Bach, universal and harmoniously.

It’s not always totally obvious, even from my Sennheisers and with an HD recording via Qobuz, where the multiple cellos end and the electronics begin, such as the Sarabande 2.4. or the shimmering strings at the opening of the Sarabande 6.4. And, indeed, there are lots of neat effects which, to my ears, appear not to be electronic, such as the reverberative, at times almost choral, effect provided by the additional cellos in 2.5. Menuetts and the rich layering of the strings in the 4.2. Allemande. Is the texture of the 6.3. Courante just down to the clever way he has used the acoustics of the studio? All this speaks to the deftness with which the various elements have been blended. Indeed, it wouldn’t altogether surprise me if some of the synth highlights I’ve called out above don’t actually involve one.

Then there is the almost three dimensional way the multiple cellos bring the dances of the music to life and transport me to a ballroom to an extent that I’ve never experienced before from a performance of this music. This is especially true in the Courante 3.3. or the Gigue 3.6. or the Gavottes 6.5. (there’s something in the way the melody emerges in the latter which particularly puts a smile on my face). This is music where it is a challenge to sit still. Of course, dance is not new territory for the composer, whose previous work includes FLOW in 2013.

At times things are much more conventional: the 2.3. Courante, as several movements do, starts and ends with solo cello and the 1.5 Menuetts seems to be a straight reading. But the ear, or I rather think the composer, plays tricks: on first listen, the 6.3. Courante made me think it might be another in this mould, until I listed again with the score and wondered why I’d thought that.

When listening to the slow movements such as the achingly beautiful 4.2. Allemande, I think this is where the reinterpretation is strongest. But then I listen to quicker dances such as 3.6. Gigue and think this is the high point. And then I get some interestingly blended synths such as in the 4.3. Courante... Then there is the final Gigue 6.6 which seems to bring many of the albums themes together and provide a satisfying close with, as it started, a lone cello.

In truth, there’s enough inherent variety and depth in the source music that this mix of approaches never lacks coherence, but it’s also a testament to the skill of the recomposition in judging when to add, to blend, and to leave well alone.

Which leads to the main risk of such a project: that the listener is so used to Bach’s version and hearing it one way, that the changes jar and feel wrong. Fortunately that is never the case, and while I often want to go back and compare to the original, I never wished I was getting it instead. Rather, Gregson has provided us with a new lens, or perhaps prism, as the excellent cover art seems to imply, through which to appreciate these works anew. Indeed, opening up the music like this and using multiple voices to reveal counterpoint and polyphony only further highlights the genius of the original solo composition. And, as the recomposer himself notes in the final interview, Bach can take it.

And it remains very much Bach. After spending a few days immersed in the recording there is still very much that uplifting feeling one gets from overdosing on Bach, that the world makes a little more sense again.

This is a magnificent achievement. So good, indeed, that it prompted me to blow the dust off my blogging keyboard for the first time in three years. It doesn’t replace the great traditional recordings of the cello suites, but I don’t imagine that was ever the point. It certainly does earn a place in my library alongside the likes Watkin, Schiff and Rostropovich among my favourite interpretations of these works, and similarly alongside the likes of Loussier and Caine among the great reinterpreters. As always, I can’t wait to hear what he does next.
Posted by Tam Pollard at 16:34