On Thursday 21st August Alfred Brendel plays what will be his final concert in Scotland. But such is our foresight, we here at where's Runnicles are able to bring you the review two months ahead of time. Actually, if truth be told, we are in fact able to bring you the very late review of an identical programme he played four months ago in Glasgow, but shush!

The programme was the similar mix of composers I have come to expect from a Brendel recital over the last few years: Haydn's, Mozart, Beethoven and Schubert, the evening's particular attraction being the D960, long a favourite, and of which Brendel has one of the finest accounts on disc (his live reading, pictured, not the studio one). 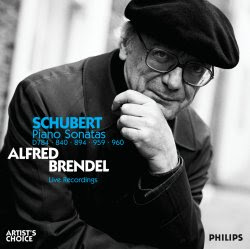 He led off with Haydn's variations in F minor, Hob.XVII/6. The clarity and dexterity of his playing belied his age, in particular the easy way right hand crossed left. The majestic and delicate close was played in such a way that not a smattering of premature applause was heard. Brendel, as ever, retains a commanding stage presence.

This was followed by Mozart's sonata in F major K533. Here again he brought incredible delicacy to bear and yet also impressive speed. The last time I heard Brendel, I worried that his memory is not what it was, but there was no trace of such concerns here.

The interval was programmed to come at this point. The moment I saw this, I knew this was a mistake: the D960 deserves to be on its own. Brendel knew so too, and followed straight on into Beethoven's sonata in E flat major, op.27/1. This was a tour de force which few could manage as well. Whether he was playing slowly or quickly, whether displaying delicacy or weight, he did it equally well. This was simply masterful pianism.

After the interval he gave an account of the D960 similar to his more recent live recording, only better for the immediacy of live concert. It was a reading that had all the qualities he displayed while playing the Beethoven and more: pauses were held to excellent effect, changes in tempo were executed in the most masterful way and tension was built bringing your reviewer to the edge of his seat. Yes, there may have been the odd wrong note, but in a live performance of such an epic work it would be hard for there not to be. Brendel's artistry rendered such points moot.

It was an extraordinary evening. And then he played two encores. I have complained about this before: I do not care for encores, especially after a piece like the D960. I couldn't identify either of the pieces (though one may well have been Bach), but given what we had had, they added nothing.
Posted by Tam Pollard at 18:19