A weekend of culture, Part II: Aida at ENO, or why Tim Ashley wouldn't know a good thing if it danced naked in front of him

There is nothing so like a timely review. But in its absence, where's Runnicles whisks you back to November and the second instalment of a weekend trip to London, following hot on the heels (the concert, not the review) of the LA Philharmonic.

The continuing "own goal" curse is much in evidence at English National Opera at present. Hard on the heels of Sally Potter's controversial Carmen and an ill-conceived production of The Coronation of Poppea, we have a new staging of Verdi's Aida, which does neither the company, nor Verdi's masterpiece, any favours.

So sayeth Tim Ashley, writing in The Guardian. He is not only profoundly wrong, with which I have no problem, everyone is, after all, entitled to their own opinions, but he is also profoundly misleading. And I do have a problem with that. The impression gained from his review is that here is a production which flouts the text at every opportunity. In fact, the reverse is true. For once we get a production where characters singing about a sword actually wield one, as opposed to the briefcase one might expect to find in some productions that think they're cleverer than they in fact are. He lambasts the costumes as daft, but while I'm not Egyptologist they looked reasonably authentic (with the measure of artistic licence you might expect). Perhaps Mr Ashley might like to visit the British Museum and learn something in this regard. The final inexplicable thing about this review is that he's actually very positive about both the music and the choral singing, yet gives no balance. Even if I agreed with him about the production, given that, 2 stars would not be fair. Anthony Holden The Observer is similarly wide of the mark. The Telegraph has some sense (it feels disturbing to write those words), but by way of balance, to compliment my brother's review, here is the real score. 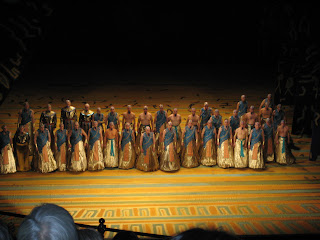 Let's tackle some of the objections made. Firstly, Mr Ashley suggests fashion designer Zandra Rhodes' costumes might make you think "Aida is about frocks and bling". Now, I will concede I'm no authority on Egyptian dress, but from what I do know, the picture she creates is vivid and roughly right. Similarly the sets: pyramids are pyramids. Perhaps this sort of thing is our critics' general problem with the production, for Rhodes and Davies a sword is a sword and a crown is a crown. They bring a visual spectacle that is entirely justified by both text and music. Where Mr Ashley sees the "gaudy", I see grandeur. Priest may be "stripped-to-the-waist, gold-skirted", but his complaint only causes one to wonder if he's ever set eyes on a hieroglyph. Some of his criticisms about the obviousness of wigs and the like may be true in the 5th row of the stalls; to the back of the gods they were not. Indeed, we did wonder if this kind of spectacle requires a little distance, and might have come to that conclusion, were it not for the fact that we knew people in the stalls who loved it too.

Then there is the magnificent triumph scene. Anything but "awkward". The elephant, elegantly constructed: a platform borne by four men, two more carrying the ears on sticks, another the head and the trunk. I don't do it justice in my description, but it moved with a grace that vividly brought the animal to life and captured the sheer dazzling scale that these events must have had. And did so in perfect time to the musical climaxes. Perhaps the critics attended earlier nights when things were not quite so taut. But there are other points to note: the production makes the ballets work, something that can be problematic. The triumph scene is an especially fine example since it does so via a reenactment of the battle.

The production also scores in the excellent lighting design of Bruno Poet, especially in the way the temple door closes in act three, or as the tomb fades in the finale, the set also closes in brilliantly. Indeed, the final act is moving as we feel not only the tragedy of both the lovers, but also that of Amneris. Aida's betrayal is also managed convincingly.

But what about the music, surely the most important aspect of any opera production (to which Mr Ashley gives so little weight in judging the production), after all, a bad production sung beautifully is not the disaster that the perfect production coupled with inept singing can be. Gwynne Howell is a fine Pharaoh and Iain Paterson is simply superb as the Ethiopian King. Initially Jane Dutton, as Amneris, Pharaoh's daughter, gave pause for thought; in Verdi it can be a very long night if the female lead is weak. But she had warmed up by Act II and sang creditably for the remainder of the evening. Claire Rutter's Aida was also good. As this is ENO, it was sung in English. Diction has been a significant problem there in recent years and while this was by no means perfect, glances at the surtitles were not as frequent as they have needed to be on some occasions. The other criticism that is frequently levelled at Verdi in English is that it sounds like a cousin of Gilbert and Sullivan, but that didn't seem the case here.

It's been said in many quarters that the appointment of Edward Gardner has been a good move for ENO, and these ears more than confirm it. There was plenty of drive and power to his reading, he never got lost in the ballets as can so often occur. Indeed, his mastery of the score rather made me wish that Chandos had been there taping it for Opera in English; sadly this seems unlikely as there is already a recording under the inferior baton of David Parry.

Far from another "own goal", this is precisely the kind of production that should be encouraged. The production returns to ENO next season, though not unfortunately under Gardner. It seems it sold well last time, so clearly the punters thumbed their noses at the critics. A well deserved success for ENO: more of the same please.