Runnicles, in Rotterdam. Well, no, at least, not so far as we are aware. But your authors were there on Friday the 6th June. The reason was our attendance of a rare performance of Messiaen's only opera, St Francis of Assisi (review to follow), in Amsterdam the following day. Our host's brother is the Amsterdam conservatory trained pianist of a jazz band called Quincy who were playing in the semi-final of the Dutch Jazz Competition held there. We had thought of attending the Concertgebouw, still an ambition, but a programme of Messiaen and Bruckner the night before St Francis didn't seem the best idea. 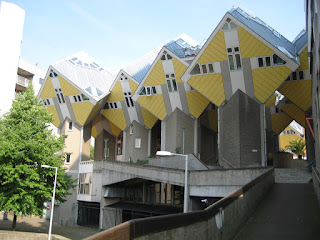 After a day wandering round the lovely city of Rotterdam, including some fascinating architecture such as the cube houses (pictured, though my sister-in-law-elect took much better photographs than I managed) we made our way over to an art house cinema where the concert was to take place.

Each of the five bands played a song of 3 songs lasting fifteen to twenty minutes. Despite the small room all were amplified, which I think wasn't always necessary. Oddly, especially given the scene in Pulp Fiction which says you can take beer into Dutch movie theatres, no alcohol was allowed in the auditorium, surely antithetical to a good jazz concert.

Quincy had drawn the short straw of being first up. They played very well, and were a cohesive ensemble. If I had a reservation it would be that the balance wasn't idea - though this is likely to do with the amplification, but I would like to have heard the piano more prominently. There style was very accessible and what might be termed smooth jazz on JazzFM. A competition is never an idea setting to hear anyone in, but I don't think I'd mind hearing more from these guys. And you can too, since they have several CDs.

They were followed (after a link in Dutch, of which I was the third recipient of a Chinese whispered translation from our host Anna) by form farmer Anne Guus Terrhius and his trio. They had a very talented drummer but I didn't really think the styles of the band members really gelled, to me they were near the antithesis of the single voiced Bill Evans trios. I also found their compositions a little sprawling.

Before the interval it was the turn of Mike Roelofs Band. Again, they didn't really seem to gel until their third and final piece which really came together, not least with an impressive trumpet solo and some nice piano work, with the pianist reaching inside to mute the instrument.

A drink or two at the bar and we were back for the stylings of Eject the No, a trio comprising two electric guitars and drummer. They led off with a piece called handkerchief, so called because the lead guitarist was muffling his strings with one at the outset. The whole band, but particularly the bass guitarist looked rather as though there were completely stoned, and the music did nothing to dispel this notion. The pieces were abstract and rambling. There was a strong feeling amongst those I was with that this wasn't jazz. Having steeped myself in the likes of Miles Davis, Marcus Miller, Herbie Hancock and other practitioners of jazz/rock fusion I was less sure. The second piece was somewhat more coherent and I saw more merit to it, the drummer was particularly fascinating, for example bowing his cymbals.

Lastly came the Sandro Fazio Band. Looking to my notes I see all I have written of this, from memory, sextet, was that aside from a decent alto saxophonist they were rather bland.

We retired to the bar while the jury made their deliberations. In the end they put Anne Guus, Mike Roelofs and, controversially Eject the No through (along with a fourth group from the other semi-final). I found all these decisions a little odd. While Mike Roelofs Band had done a good last number, the first two had been lacklustre and that kind of inconsistency shouldn't merit a final place. I suppose the unity of voice which I didn't find in Anne Guus is a matter of taste, likewise Eject the No. That said, there was wide disappointment that Quincy hadn't made it. It was wondered if their place in the final last year had meant the judges wanted to give others a shot, but that seems unfair since it isn't one of the criteria. Perhaps they were too accessible, certainly the presence of Eject the No lends credence to this. However, bias not withstanding, it does seem wrong that the most consistently good band didn't make it through.

I don't know how typical this was of the Dutch jazz scene, but in general this seemed to be fairly smooth and I would have liked a few more numbers of the toe-tapping variety. As usual, I found myself at odds with the competition judges. Plus ca change.

The final will be held at the North Sea Jazz Festival on 12th July (while I will be attending Charles Mackerras conducting Mozart's Marriage of Figaro at the Royal Opera House).
Posted by Tam Pollard at 17:43