Jansons and the Concertgebouw's disappointing and overpriced Pictures at an Exhibition

It's not often one picks up a brand new CD that weighs in at under forty minutes. True, if you go back enough decades to the LP era it was commonplace, but not now. Some of the best albums ever issued are short: Ben Webster meets Oscar Peterson is a prime example and its genius is such that one doesn't feel in the least short changed. However, on classical CDs it's rarer, not least because when those old albums get a rerelease, it's easy to find something appropriate to fill them out with. For a new classical disc to be this short is pretty well unprecedented, and yet that's exactly what we have with the Concertgebouw's new own label disc: 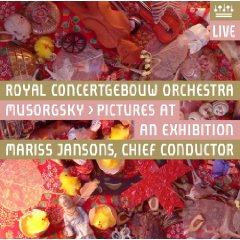 Now, of course, you could argue that Pictures at an Exhibition is such a glorious work that it requires no companion. Yet a glance through the most recent copy of the Penguin Guide I have indicates that that isn't an argument anyone else has made. If you were going to make it, to then charge full price (the disc goes for £10.99) is bold, not least as this is a pretty competitive bit of the catalogue. Frankly, to justify its price tag, this needs to be just about the most amazing, and amazingly recorded, version of Pictures ever produced. It isn't, not on either count. (Note, this recording is of the Ravel orchestration. Throughout comparison will be to Giulini with the Chicago Symphony Orchestra, my favourite recording.)

The first surprise is the dry and closed sound compared to what I've come to expect from this label, as a result the recording is lacking in clarity and detail. It's not bad by any means, but it's also not reference quality. True, sound is a little dry for Giulini too, but I don't get the sense there that I'm losing anything.

The second surprise is that the recording feels somewhat subdued. Even though Jansons is quicker than Giulini on paper, his reading feels sluggish in comparison, particularly in the Promenade and La grande porte de Kiev. Perhaps it's just that Giulini exudes a greater sense of energy.

There is some very fine playing on display from the Concertgebouw: the winds at the start of the Gnomus and Il vecchio castello are especially wonderful, as is the glorious brass playing in Samuel Goldenberg und Schmuyle. However, the Chicago have good playing too, but theirs is coupled with a certain flashiness which seems well suited to this work.

Generally, Jansons is at his finest and most insightful during the quieter and more subdued moments such as during Il vecchio castello. The recording not without its magical moments: there is a gloriously lumbering sense of momentum to Bydlo and in La cabane sur des pattes de poule his interpretation really catches fire in a way that has been lacking.

It is, in other words, a solid if not revelatory reading. If it was paired with another good performance, then it might well be worth acquiring. But it isn't. True, the couplings on DG's current issue of the Giulini recording are, frankly, forgettable; but that disc goes for just £5 and, if you shop around, can be had for less than half that. Giulini's earlier live mono account (with the Philharmonia) manages to squeeze in Tchaikovsky's sixth symphony as a filler!

I love the Concertgebouw, I love Jansons, and I love to support orchestra own labels. Sadly, though, I can't recommend this disc. It is one only for completists or those who want to relive the concert.
Posted by Tam Pollard at 23:29