Schiff, Elder, The Halle, Elgar's cello concerto and the tears in my eyes

If this CD hadn't been released back in 2004 it would unquestionably be one of my discs of 2009. As it is, it is one of the most satisfying purchases I've made in the last twelve months, a revelation of a familiar work and one I cannot recommend highly enough. 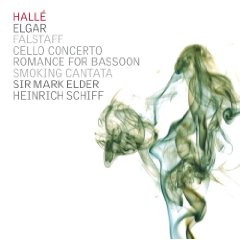 Heinrich Schiff digs deep in the opening chords, and yet without the melodrama that can sometimes be present here. More surprising, though, is the softness and delicacy that follows. However, something in its way more remarkable than Schiff's playing is going on, and that is Mark Elder's accompaniment. Beneath the soloist, the Halle, still with their rich, lush sound, are remarkably understated. Elder is putting the soloist absolutely front and centre.

Of course, that's not to say that he's afraid to turn up the volume when called for in the orchestral passages, but when he does this only seems to underscore and accentuate what Schiff is saying. Schiff's reading itself is beautifully judged, often remarkably delicate, and fully bringing out the yearning that pervades the opening movement. This is always an emotive piece, but somehow Schiff manages to tug on the heartstrings that bit harder and more often.

Then there is the edginess to Schiff's playing at the opening of the lento. There is something almost dangerous here. While it never settles down completely, it does have moving moments, especially when the big orchestral accompaniment comes in, providing a warmer contrast.

The beautiful adagio is also marked by Schiff's lightness of touch and Elder's sensitive and subtle accompaniment, but also by the general tenderness of his playing. Time and again one is struck by what a beautiful tone the soloist is capable of producing.

Something similar is going on in the finale, where it is tempting to describe Schiff's playing as nimble. Not swift, per se, but the same lightness that has marked the whole performance mixed with an impressively dextrous agility. At times both jolly and sad, riven with contrasting emotions though never in a way that is over the top. It is an immensely satisfying performance.

Throughout Elder displays superb judgment in support of his soloist. Never do their approaches seem at odds, or to possess different conceptions of the work, as is sometimes the case in concerto performances. Instead we are presented with a singularity of vision. The Halle's playing is never less than superb.

One of the most striking aspects of this recording is just how fresh this team make a very familiar work sound - take, for example, 4:30 on the finale, in comparison to which my other recordings feel almost stodgy. If you feel you know the work backwards, the energy and excitement of the finale may well have you questioning such assumptions.

This is a beautiful, addictive and highly moving reading. The quality of the recording is very good too, as seems standard on Halle issues. If you haven't already heard it, I cannot urge you strongly enough to do so. This may seem sacrilegious, but I think I prefer it to the legendary Du Pre/Barbirolli version on EMI. Du Pre may hold sway in the opening movement, where the sheer weight of emotion wrung from each bar is often devastating. But elsewhere, Schiff seems to have something altogether more interesting to say.

The disc also contains Elgar's Falstaff and an amusing little gem The Smoking Cantata. Both seem well enough played, but I know neither sufficiently to review the recordings. It doesn't matter: the concerto alone justifies the price of admission.
Posted by Tam Pollard at 22:30