Rarely have I seen a film quite so replete with homages to the work of others as Guy Ritchie's new take on Sherlock Holmes. At times the viewer might be forgiven for thinking that he has wandered into one of Tim Burton's Batman movies, Young Sherlock Holmes (a film for which I must admit some affection), Doctor Who Victoriana (whether of Tom Baker or Sylvester McCoy vintage) or the Da Vinci Code franchise (I must admit I have never actually seen a whole movie from the last stable but judging by the trailers there seems to be some overlap). More distantly one can also glimpse echoes of other classics of the period adventure romp, the score occasionally sounds a little Pirates of the Caribbean and the ensemble is reminiscent of Indiana Jones. Why then, you may ask, should you bother going to see this film? Because despite these many influences it is hilariously funny, keeps you on the edge of your seat, boasts a superb cast and an excellent script (the latter a sad rarity in the film world and therefore the more deserving of praise). 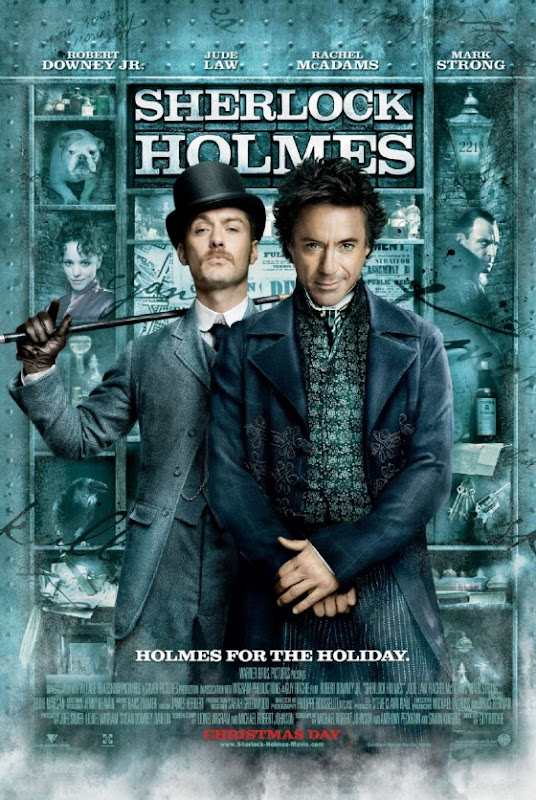 It is the twin elements of very successful casting and scripting that make this film such a triumph. The script has been produced by no less than three writers (Michael Robert Johnson, Anthony Peckham and Simon Kinberg), none of whom seem to have done much in the way of films before if IMDB is to be believed. Yet the script shows no signs of the clunkiness one might expect from a multiple production. It is often very funny, but can be moving without tipping over into melodrama, and cleverly keeps you guessing about the key McGuffins of the plot – is Lord Blackwood (a suitably demonic Mark Strong) really achieving all his successes by black magic and is Holmes in some way implicated in the crimes. They are also extremely clever in their characterisation of Holmes: in place of Jeremy Brett's mordant figure, Robert Downey Jr gives us a master detective whose brain is forever working overtime and keeping him dangerously close to madness. This may not be completely Conan Doyle's creation but it is to my mind a successful re-imagining, true to much of the spirit of the original, rather than a travesty. Ritchie's direction persistently shows Downey uncovering clues, but these moments are submerged into other scenes, often through distracting dialogue from Watson, so that it really is a surprise (as it often is in the stories) when Holmes finally reveals how he has deduced various key points. The point of course is, as I seem to remember Holmes saying in at least one story, that most of the information is before our eyes, and if we had a mind like Holmes's we might see it.

Downey's partnership with Jude Law's Dr Watson is at the heart of the film, and is superbly brought off. From the very first moment we see them together, through all the twists and turns of the complex plot, they are completely believable particularly perhaps the exasperation which both use to cover how far they depend on each other. Rachel McAdams is suitably stunning as Holmes's love interest and intellectual match, and if the script does not always work so effectively for her as the others this is not her fault. Given that she is identified as Irene Adler, this is probably the point most likely to have Sherlockian purists up in arms. Yet A Scandal in Bohemia emphasises a kind of connection between her and Holmes, whom she does successfully outwit, so her role here is not so completely far-fetched. Also worthy of mention are fine turns from Eddie Marson (as Inspector Lestrade) and the marvellous Geraldine James, who is criminally underused as Mrs Hudson, an error one trusts will be rectified in the rumoured sequel.

To sum up, despite the occasional unconvincing bit of CGI (the fight on Tower Bridge at the end is particularly culpable) and the odd melodramatic turn of phrase, this is a rollicking good yarn, featuring a superb partnership of performances by Downey and Law. I look forward to the sequel.
Posted by Finn Pollard at 18:05