The extraordinary District 9, or Sharlto Copley was robbed

Every year at Oscar nomination time I usually discover at least one performance or film which has been disgracefully overlooked. This year is no exception. Where's Runnicles has to ask, how could Sharlto Copley (District 9) have been overlooked in the Best Actor category? 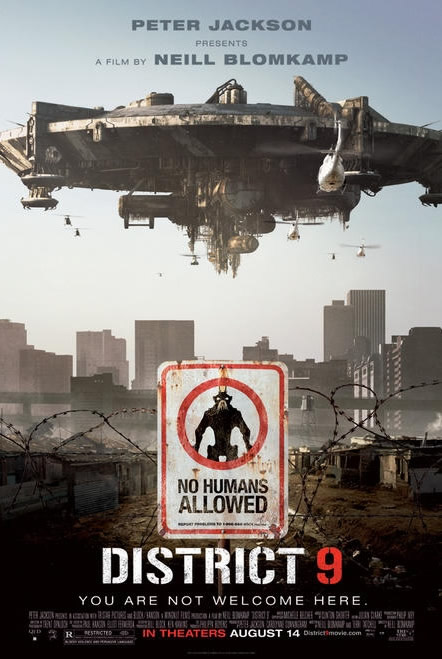 Last night Mr P came round for dinner, bringing with him the District 9 DVD. I was initially sceptical. I had a vague recollection of seeing a trailer many months ago which looked very bloody and violent and not my cup of tea at all. How wrong can you be....yes there is considerable violence in this film (some of it pretty horrifying) but all of it is essential to the story, and that story is compelling and very dark.

The film begins as a documentary detailing the arrival of a huge alien ship above Johannesburg twenty years before. We follow in snapshots the adaptation of the aliens to a district in the city which gradually becomes a slum walled off from the rest of the city. We see the rising distrust, disgust and ultimately hatred of the humans towards these arrivals, a developing feeling given added point by the South African setting and the film's careful mingling of white and black faces. This backstory is interspersed with 'footage' of Multi-National United workers as they prepare for a huge relocation operation – moving the aliens out of the city to a new purpose built camp (for which read concentration camp).

From the very beginning the film plays with the viewer's expectation. Utilising the documentary format to begin with builds up the sense of tension and unease. It is clear that something is going to go badly wrong but when it does it was certainly not what I had anticipated. Design is also key here, the aliens are distinctly unappealing in behaviour and appearance, which makes the evolution in relations, and the viewer's reactions to them, during the film the more striking. The special effects work should also be singled out. I don't know whether producer Peter Jackson offered director Neill Blomkamp any advice on the basis of his Lord of the Rings experience but the achievement has its parallels – the aliens are completely integrated into the environment – that is I never doubted for one moment that these races were interacting with each other – it was wholly, often terrifyingly, real.

However, at the centre of the film, is the already mentioned extraordinary performance of Sharlto Copley. Copley plays Wikus van der Merwe, the junior employee appointed by MNU bosses to manage the eviction of the aliens. The brilliance of Copley's performance lies in the layering: again and again as the film goes on another layer is stripped away – the character's evolution from junior bureaucrat with a Napoleon complex to tragic victim is utterly compelling even when the bloodiness was forcing me to hide my eyes. It is remarkable that this should be his first major film role.

It is not really possible to write much more without giving away the plot, and this is to my mind undoubtedly a film which it is better to come to cold. Suffice it to say this is a film asking important questions at every turn, about the limitations of our humanity, about how we treat the other among us, about how far we are willing to go in pursuit of what we imagine are our interests and what we are prepared to sacrifice to that end. Many of the answers suggested are profoundly unsettling. Yet there remains hope – not a sugary fantastical hope, but something hard won, fragile and very moving. In short, see this film.
Posted by Finn Pollard at 19:25