It's one of the great strengths of the Scottish Chamber Orchestra that they can put their section principals front and centre as concerto soloists without generating any feeling that the listener is being short changed, such is the calibre of players like Maximiliano Martin, David Watkin and Nicholas Bayley (the latter unfortunately having now moved on to the fresh pastures of the principal bass's chair at the BBC Scottish). I'm sure this is true of most orchestras, but somehow the individuality of these players shines through that bit more in concert time and again, giving the ensemble one of its special characteristics. On Thursday, it was the turn of the Peter Whelan, the relatively new principal bassoonist. He took to the stage for Mozart's K191 concerto.

At least initially, the orchestra under Ticciati was rather too heavy in the tutti passages that opened the first movement (and also the finale), drowning Whelan out. This was, doubtless, an intentional choice, since elsewhere he balanced the forces perfectly. Nonetheless, it was a blemish on an otherwise superb reading: when the eye can see the soloist playing, the ear wants to hear him too. Fortunately, it was confined only to two brief passages. Thereafter, Whelan turned in a beautiful performance, nice and clearly phrased, and very unmannered, possibly a result of his experience with period performance, yet still having a distinctive tone. The piece is not without its difficulties, but he dextrously handled some rapid and very tricky passages and managed to ensure breathing never got in the way of the musical line. The cadenzas were a special treat to listen to, particularly the sublime one in the slow movement. It was a joy to hear, the kind of performance to have you craning forward in your seat to catch every last detail. Behind him the SCO were in period mode, with the horns playing on natural instruments, and Ticciati providing plenty of energy and directing a taut performance. 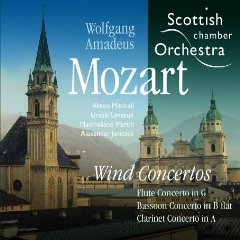 You know it's a good performance when you have to buy a recording during the interval (so much so that you do it, despite not having with you the £5 SCO CD voucher you keep forgetting to use). Of course, that recording features the SCO's wonderful former principal bassoon Ursula Leveaux. It makes interesting comparison now as I type this - two wonderful artists, yet so different. Whelan's is perhaps a plainer sound, but no less special for that, in its way purer. I wouldn't want to be without either and while there's doubtless little chance of it, it would be great if they could pop back into the studio and rerecord it with him too.

The concert had opened, however, with a more challenging piece: Ligeti's Ramifications. I don't know Ligeti's music at all well, but everything I've stumbled across in the concert hall I've liked very much. I like too that Ticciati is using his star power to play new music to packed halls. True, you'll always get some who'll sit with arms resolutely folded and refuse to clap, but those who opened their ears and their minds had a treat. Ticciati had chosen an interesting layout with the violas all in a line in the middle, the cellos in a row behind them. The piece itself, comparatively short, is a wonderful exercise in polyphony for string orchestra. Opening with some wonderfully quiet yet ever changing notes, almost like swarms of insects, gradually, organically, these almost other-worldly landscapes shifted and built to a wonderful climax before fading away again. I could have happily listened to much more of the same. It finished with several bars of silence, à la John Cage. Ticciati knew how to have fun with it and kept the orchestra poised, as if one final pluck was just around the corner, while he conducted the beats clearly. Nothing came, save an impish grin as he turned to greet the applause. More please!

I'm glad the SCO has chosen to abandon the off-putting (to some) Adventurer moniker, and fervently hope more interesting new music gets sneaked in like this next year (there's more Ligeti in April - sadly I'll miss it as I'm in Berlin to hear Runnicles do the Ring). Actually, I favour a guerilla new music approach, with short and unannounced works dropped in so people can't avoid them when booking and can't escape.

Following the interval were Bartok's Romanian Folk Dances. The last time I heard these was a fascinating concert by the Rose Street Ensemble under James Lowe which, owing to other commitments, I never got round to reviewing. What made it interesting was that prior to performing them, they played ancient recordings of actual folk music made by Bartok himself which provided a wonderful insight. Here they were slightly more of a party piece and a filler. Still, the ensemble had plenty of fun with them and they were very tightly played, with no signs of stress as they raced to the breakneck conclusion.

The evening closed with Mozart's 38th symphony, Prague. This, of course, is dangerous territory, being repertoire that Mackerras has performed with the orchestra to great effect, both live and on disc. Ticciati opted for a similarly brisk tempo, if not perhaps quite so quick, and led a crisp reading full of bounce and energy (though he seemed to omit the first movement repeat). The natural horns of the first half were joined by natural trumpets. One couldn't help but feel for Whelan who, despite having soloed before the interval, was back on duty for the Prague, which is by no means light on the bassoon. However, as he and Alison Green provided sublime duet after sublime duet, there was no sign of fatigue. Generally, the playing of the orchestra was of a very high order and held together well. It remains one of my favourite Mozart symphonies and was a fitting close to a great evening.

I've said it before, but it bears repeating. Under Ticciati the orchestra seem on to a good thing. Those in Glasgow tonight should catch the repeat, alternatively they're doing it in Turin on Tuesday. In between there is no rest, with a chamber concert on Sunday with Karen Cargill (well, I say Cargill, but I've just been to the SCO website and it seems that she's sadly out of action due to illness). Also worth noting that Peter Whelan will feature prominently in the SCO's subscriber concert next month (my form arrived earlier this week, and will be returned all the quicker after tonight).
Posted by Tam Pollard at 15:48