Knowledge is the Beginning..... The Rest is Noise

One of the more powerful concert experiences I've had over the years was the visit of Daniel Barenboim and his West-Eastern Divan Orchestra to the Edinburgh festival in 2005. Sadly, back then I didn't review in nearly so much detail as I do now, so my recollections are a pale shadow of the event.

For those who've not come across them, this a project co-founded by Barenboim and his friend, the late Palestinian intellectual Edward Said, to bring together young musicians from across the Middle East to make music together. It's not a completely novel concept, Claudio Abbado's Gustav Mahler Jugendorchester was founded along similar lines, but intractable though the European cold war dividing line was, across which it drew its members, it isn't really comparable. Such an endeavour would be well worth supporting whatever the musical merit. All the better, then, that under Barenboim they rank amongst the finer youth ensembles, having produced concerts and CDs which more than hold their own against professionals. 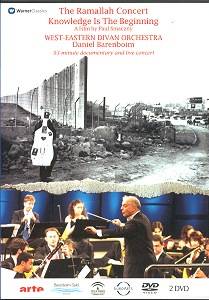 Paul Smaczyn's film, Knowledge is the Beginning....., charts the orchestra's history, from its inception during Weimar's year as European Capital of Culture in 1999, through to its groundbreaking concert in Ramallah in 2005. There is no narration, save the odd caption. Instead the story is told through the words of the participants, principally Barenboim and, earlier in the film, Said, but with plenty of contributions from the orchestra themselves. It is intercut with scenes of them rehearsing, or playing games in between, some fine concert footage and Barenboim's and the orchestra's travels.

As Barenboim has said many times, and repeats in the film, this is not an orchestra for peace: it would be misguided to imagine that such a project could achieve that. What it is, though, and the words of the musicians demonstrate it clearly does, is to bring people together, and dispel the ignorance and misconceptions that both sides clearly have of each other. As one young girl puts it when Barenboim performs a solo recital in Palestine, he's the first thing they've encountered from Israel that isn't a soldier or a tank. It provides a place for dialogue and increases knowledge.

And yet it is an uphill battle. You see the walls that are thrown straight back up when they return to their home countries: many of them could not make a phone call to another across the boarder if they wanted to. One can't help recall that the 2005 concert has remained a one off.

It's not all plain sailing either. In an early joint interview of the leader and his desk partner, the latter storms out in frustration. There is fascinating discussion amongst some of the players about the merits of Israel's security wall. However, such frictions seem to have been mild, and the overwhelming impression is of people who've come together and had a wonderful and enjoyable experience, not so radically different from any other youth orchestra. Which, perhaps, is the point.

It is frequently profoundly moving, such as during the visit to Buchenwald or in the unbelievable logistics of getting them into Ramallah: Arabs and Israelis must travel separately, all are making use of diplomatic passports provided by Spain, the Israelis are whisked in in diplomatic cars and out again with barely a chance to say goodbye once the concert is done. This final scene, wherein Elgar's Nimrod plays over the departure of this nighttime convoy from this troubled city makes for an unsettling conclusion, reminding you that however great the project is, it is a mere drop in the ocean.

The emotion is often heightened by the orchestra's or Barenboim's performances playing in the background. The music is never identified, save a list at the end, but much enjoyment can be gained, if you're like me, in trying to guess it.

There are moments of levity too. When Barenboim visits the newly founded Palestinian youth orchestra at The Friends' School in Ramallah, and he describes them as not great, not even good, I couldn't help but think of the amateur ensemble I play in. Again, though, it highlights that being great isn't necessarily the point, rather bringing people together, making music and having fun.

Music has a wonderful power to bring people together, but I was struck that while it doubtless does great things for those involved, and the many more who see and hear them, there are some who are determined not to be won over. In a telling scene, Barenboim visits the Knesset to receive the Wolf Prize in Arts and uses the speech, having first spoken about the foundation of Israel and his parents' migration, extensive quoted the declaration of independence, goes on to criticise settlement building. The education minister then delivers a riposte that she felt the prize committee was wrong give it him and regrets his attack on Israel. As ever, there are none so blind.....

It reminded me of footage, not included, of a concert of Wagner given in Israel, where a protester disrupted the concert swinging a football rattle above his head. A similar incident occurred in Edinburgh last year when a concert by the Jerusalem Quartet was continually disrupted by people protesting about the situation in Palestine, forget that some its members have worked with the West-Eastern Divan. It calls to mind some who feel that a total cultural boycott of Israel is what's needed. One wonders if watching this film would help, but somehow I'm not sure.

Early on in the film there are remarks by the players about their level of ignorance before meeting each other, about views derived from political rhetoric or a slanted media. Time and again as it wore on, I kept finding the title of Alex Ross's unrelated history of twentieth century music ringing in my head: The Rest is Noise. Here, at the heart, was music, bringing people together, removing barriers and providing common ground, increasing knowledge and providing a space of dialogue. Outside of this, an awful lot of the rest was noise. That's a pity.

It was on at the Filmhouse for one night only, but the film is included on the DVD of the Ramallah concert, it is well worth acquiring for both.
Posted by Tam Pollard at 01:22

By way of footnote, the film was being presented by a group called Take One Action, in association with a youth project run by the Mercy Corps. Overall, the organisation of this was a little lacking, particularly a discussion segment afterwards where it rather felt the host was making it up as he went along. The film would have been best left to speak for itself.